Menelaus and Helen In 'The Trojan War'

The perspective, and of whose point of view the poem has been written, does not change. It is always from Menelaus point of view of what is happening.

Turn in your highest-quality paper
Get a qualified writer to help you with
“ Menelaus and Helen In ‘The Trojan War’ ”
Get high-quality paper
NEW! AI matching with writers

Both in part one which describes the scene of the Trojan War, and how Helen has been captured by Paris and is token away from Menelaus, and in part two, which talks about the future, and supposition of how Menelaus and Helen would be years after, it is all Menelaus’ point of view, and not Brookes. The effects of this are that we only have the point of view of one of the main characters, so we do not know how the others felt about the same situation, because Brooke just describes Menelaus’ thoughts and not Helens.

It is distinct in the poem that the persona is not Brooke, and that Brooke is simply writing as if he knew what Menelaus thought. This can be told because Brooke writes, “Menelaus broke To Priam’s palace”, and not “I broke into Priam’s palace”. The speaker clearly indicates what took Menelaus to this action, his reasons, his feelings, and sensations; Brooke refers to Menelaus’ actions, the scene, as if it were a fact, he does not at any moment of the poem, show his opinion.

He is not biased; he simply tells what happens when Helen is captured, as if he were an observer.

In the second stanza, it is not Brook’s thoughts, but Menelaus’ feelings towards Helen. It is very clear that Brooke does nto put himself as if he were Menelaus, “He had not remembered that she was so fair”, he just describes his thoughts as if he knew what Menelaus though about Helen. In the second part of the poem, Brooke analyses the scene and gives his opinion, “perfect knight”, in the third stanza he continues analyzing, he writes about Menelaus thoughts. So there is a clear distinction between the writer and the persona, we can tell whether or not the character and voice is in the poem or not.

Brooke does not only state the facts, he is writing as if he could read Menelaus’ mind and thoughts about his future with Helen, he then goes back to telling the facts and what actually happened when they got old, relating the facts, being omniscient and analyzing what happens, this enriches our comprehension about what is going on.

The poem does not have a formal structure. Although we can depict some rhymes at the end of lines, they do not follow a regular pattern. There is also some sense of symmetry, for the stanzas are reasonably the same length. The poem is divided into two parts, the firs one which is a myth and the second one which is the reality.

The theme is first presented by a description of the scene, the capturing of Helen by Paris, then, the feelings of Menelaus towards Helen and their lives, following a vision and analysis of the result of the capturing and how Menelaus imagined his future would be, finally, a report on how their lives actually turned out to be.

Brooke narrates the scene, he describes Menelaus’ thoughts and therefore does not use speeches in his poem. When there is use of speeches, we know exactly what are on the characters mind, but he does not use them, and we still understand the thoughts of Menelaus because the author does not write of his point of view, but as he were thinking like Menelaus.

There are connotations such as when Brooke relates Helens voice as being golden. In this case his intentions are not to say that her voice is made of gold, but this suggests that she has a soft voice, which gives an impression that she is a delicate and elegant woman. Brooke does not literally mean that Helens voice is gold. Brooke does not need to tell the readers that Helen is a feminine woman, because, by saying that her voice is golden, that is already noticed by who reads the poem.

Menelaus and Helen In 'The Trojan War'. (2017, Aug 23). Retrieved from http://studymoose.com/menelaus-and-helen-in-the-trojan-war-essay 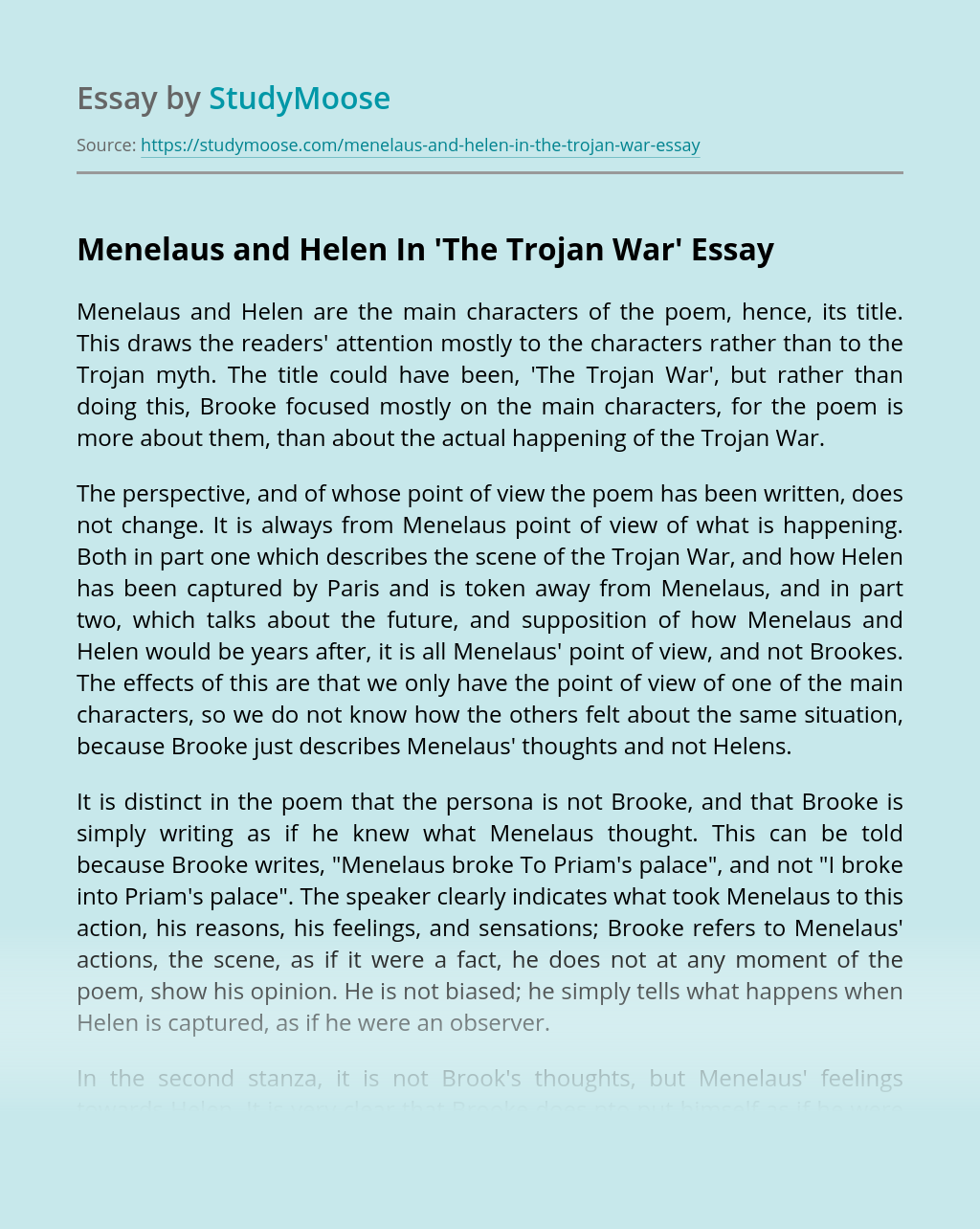 Turn in your highest-quality paper
Get a qualified writer to help you with
“ Menelaus and Helen In ‘The Trojan War’ ”
Get high-quality paper
Helping students since 2015
Stay Safe, Stay Original