Memorable Moments with My Sibling

A relationship with a sibling is everlasting: last longer than the bond with a spouse, parent, or friend. Have you ever thought about the times you have spent with your siblings? Those are memorable moments that I would always cherish. The bond with my sibling taught me many lessons in life. My childhood relationship with my sibling has changed since I became an adult. The communication and the people we associate with had changed between us. During any oppression we had gone through, our love still remains the same.

Don't use plagiarized sources. Get your custom essay on
“ Memorable Moments with My Sibling ”
Get custom paper
NEW! smart matching with writer

Since adolescence my younger sister, Genesis, and I were inseparable. We were like the cartoon characters Tom and Jerry. Genesis used to tell me everything; I was like her secret diary. For example, Genesis would come home to our two bedroom apartment from Attucks Middle school and used to tell me how wonderful or miserable her day went. When she had a delightful day coming home would be satisfying and a little annoying for me.

She would tell me how stunning a boy was in her class and was disturbing for me.

I didn’t want to hear about her Prince Charming. However, you could tell when she had a dreadful day, she would come home slamming the front door and leaving an echo in the vague hallway. She would run to our cluttered room and jump on her twin size bed. Walking towards her I could hear her calling my name “Eric”. I said “Genesis are you feeling ok, what’s wrong? ” Genesis said “There is a boy in my math class calling me a nerd.

” I would then comfort her by giving her a hug and tell her not to worry.

You know what they call nerds in the future? Boss! ” I said. Genesis always felt safe around me I was there to protect her from any harm like a father figure. However, I joined the United States Army; our molded relationship became more distant. I would only see her physically when important events occurred. For instance, I saw her three months after I graduated from basic training in Fort Jackson, South Carolina. Communicating through Skype and the six hours difference between Germany and Florida makes it difficult to talk my sister.

Our daily conversation about are experiences since we were younger became weekly or monthly as we matured. Overall, age and the distance between us had caused our connection to fade. When I was younger I used to consider Genesis annoying, because of her eager desire to hang out with my friends living around Coolidge Street, Florida. For example, when I got invited to house parties, Genesis assumed she was automatically invited. Of course she was wrong; a house full of 18 year old teenagers partying had no business interacting with a 14 year old girl.

As I got older Genesis became a young adult; the age difference didn’t seem to matter anymore. Now that Genesis became mentally matured, she is acceptable to be in my group of friends. A couple of my friends spend time with my sister watching movies and taking her to different vicinities. My sister and friends took a trip to Rapids Water Park in West Palm Beach, Florida. They enjoyed having a blast in the refreshing pool and the water coasters. In brief, since my sister and I share common friends, we socialize more than the past.

The love between my sister and I will remain the same. Even through any tribulation that had occurred toward us, we would always be there for each other. For example, my sister would try to hide the fact that she had a fear of crossing the road every morning to the bus stop; I had an intuition that she was, so every morning at 5 o’clock I would walk my sister five blocks and cross the street with her to the bus stop, sacrificing two hours of my sleep to ensure that she would arrive safely and according to schedule.

Genesis is currently nineteen years old, she had two car accidents and is going through some hardships because she is unemployed and her insurance bill went up. I manage to help her financially until she’s on her feet. Vice versa she also helps motivate me with her encouraging words and accomplishments. She graduated top ten percent of her graduating class and did early admissions while in high school. I was discouraged to enroll into University of Maryland University College while being in the military; by her achievements I was inspired to enroll into UMUC and take a writing 101s course.

As you can see, during any discomfort Genesis and I will go through, we will always take care of each other. In conclusion, since childhood my relationship with my sister has changed, our communication had faded over time. Some of the friends we spend time with, are the same. When we had gone through any problems, we would help each other. Why is our bond so strong? We had been there for each other our whole life. Even the distance between us, would never break our love for one another.

Memorable Moments with My Sibling. (2016, Nov 20). Retrieved from https://studymoose.com/memorable-moments-with-my-sibling-essay 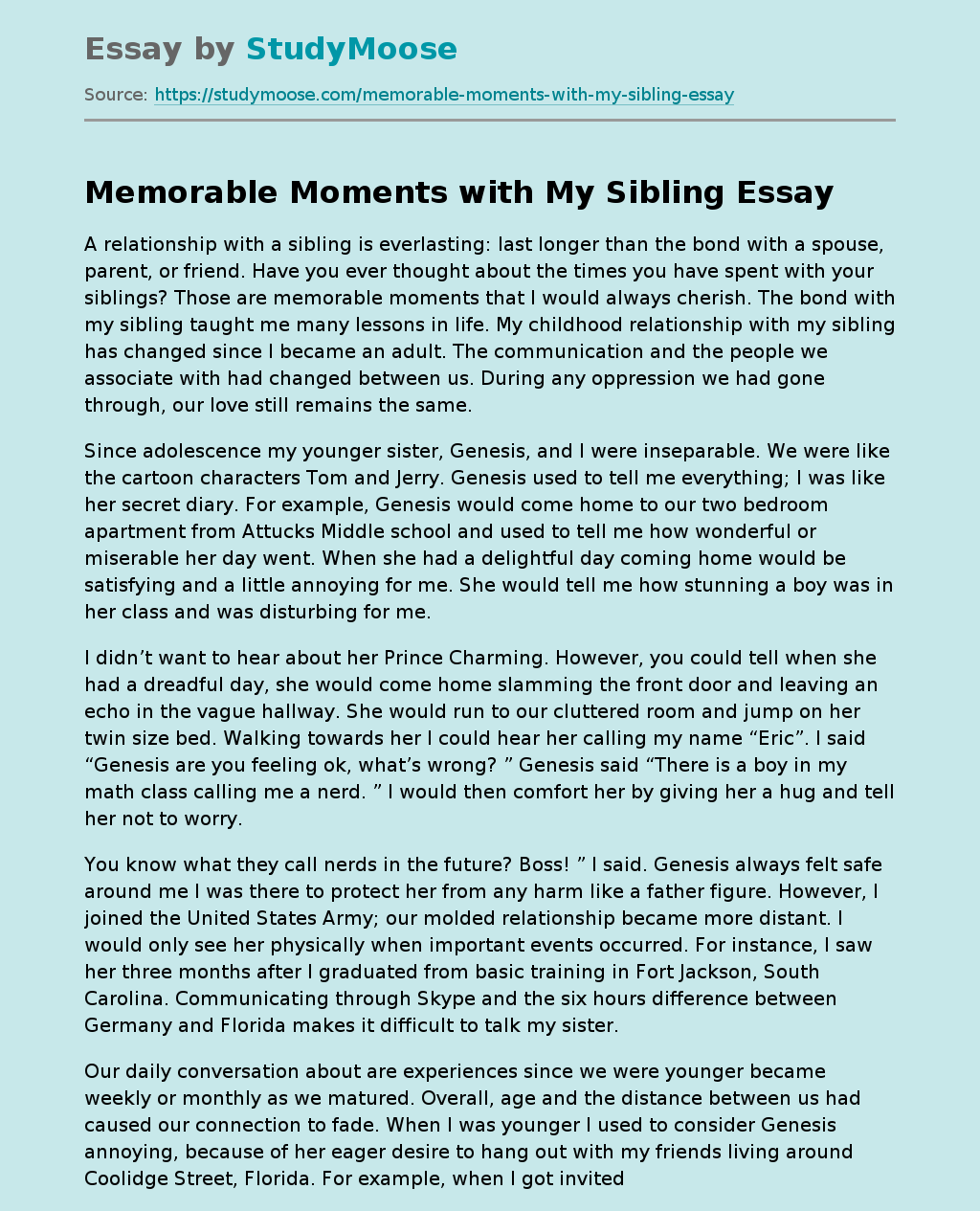