‘Medicine is the biggest epidemic in our time’ was Ivan Illich a prophet or a rumormonger?

Ivan Illich is an Austrian philosopher, very popular for his of contribution of theories on the concept of medicalization. He has published many books on medicalization and has presented to a wider public the notion of iatrogenic disease. Medicine is a major therapy tool in social life, without proper medication human life could be highly constrained by many diseases surrounding it. Ivan Illich has had a contribution in the field of medicalization as philosopher by constructing theories that various medics have followed in their practice.

Don't use plagiarized sources. Get your custom essay on
“ Medicine is the biggest epidemic in our time’ was Ivan Illich a prophet or a rumor monger ”
Get custom paper
NEW! smart matching with writer

Iatrogenesis is term that is used to refer illness that come as a result of medical activity and outweighs any positive benefit of medicine. Iatrogenesis was introduced into social science by Ivan Illich. According to Ivan, iatrogenesis had adverse effects on the industrial society as it enhanced the corruption, incapacitated individuals and limited freedom in an industrial set up.

Illich outlined three major types of iatrogenesis; these are; clinical, social and cultural iatrogenesis. Illich has theorized various phenomenon in medicalization and society.

This essay is particularly point out some theories that highlight whether Illich was a prophet or a rumormonger in the society and show some evidence based on his approaches on medicalization. The essay will as well focus on the notion of iatrogenesis and statistics that has been conducted in the UK based on statistics. Finally, the essay will show some views of Illich on medicalization and also how iatrogenesis can be prevented in society.

According to the statistics in the UK, it indicates that the estimation of 215,000 deaths every year have been caused by iatrogenic, whereby cancer and the heart disease are seen to be causing more deaths in every year(Shaffer, Philips, &Enzer, 2009, p.241). Some iatrogenic effects in most cases are fully defined and can be recognized easily, for instance those complications that need a surgical procedure. However, the less obvious complications need significant investigation to recognize, such as difficult drug interactions.

Ivan Illich who was a great thinker and a multilingual prolific writer on issues related to society and medicine attributed his concepts of medicalization and proposed his views towards the modern medicine in the society. Henceforth, Illich argues that the notion of medicine had deprived individuals and society of their capacity to cope with sickness and death (Basford, Lynn & Oliver Slevin, 2003, p.122). Therefore, based on Illich, iatrogenesiscannot be understood unless it is seen specifically medical manifestation of particular counter productivity. Illich points out the main three levels of iatrogenesis. The first level is the clinical iatrogenesis, this whereby the injury is depicted to the patients by unproductive, toxic and insecure treatment to the patients. The second level is the social iatrogenesis, which comes as a result of medicalization of life, and thirdly cultural iatrogenesis, which comes as a result of the destruction of traditional ways of dealing with and making sense of death, pain and illness. Therefore, based on the evidence in his works of medicine described for over twenty years, it is noted that Illich was not a rumormonger, but a philosophical prophet, based on his predictions and research on the concept of iatrogenesis.

Ivan Illich has traced contemporary idea of the issue of epidemic in the societal context, and this notion has greatly focused on the main assumptions that lead to that epidemic. Based on his ideas, he argues on the progressing views on medicine; there is an empowerment model that has evolved out of the realization of epidemic and, therefore, patients cannot be forced to follow a lifestyle dictated by others towards the problem of medicalization.

Based on Ivan Illich’s theories on his perspectives towards natural health, medicine undermines health of individuals not only based directly on aggression, but also over the impact of its social organization on the milieu. On that context, when the medical damage to the health of an individual is produced based on the sociopolitical mode of transmission. Thus, according to Illich, social iatrogenesisis designated in all impairments on regard to health that specifically to those socio-economic revolutions which have been made pretty, probable, or essential by the formal shape health care has taken (Kazer, 2008, p.209). Thus, based on his views towards the medicalization, the assumptions that erupt prevail that Illich was one person in the society who was seen as a prophet. Most people considered his ideas more especially his aspects on the iatrogenesis and through his open minded on the society, they regard his views to be those of a prophet.

The iatrogenic death has become the third leading cause of death in the UK, surpassing the death by stroke. Based on different sources indicate that, between 200,000 and 250, 000 people are reported to die each year from Adverse Drug Reactions (ADR) in the hospital setting (Kazer, 2008, p.289). On the same note, it is seen that deaths by ADRs kills over five times as the illegal combined in every year and that is the most conservative estimate that is outlined. Thus, the prescription drug Vioxx kills an estimated of 60,00 people by cardiac arrest alone and this figure does not reflect and account for any other fatal side effects such as the internal bleeding. In most cases, medicine undermines health and this is not only based on direct aggression against individuals but it has also an impact on the social organization on the total milieu. Therefore, medical damage to the individual health is enacted by the social iatrogenesis. This defines all the deficiencies that subdue to health and are due precisely to those socio-economic revolutions that have been made impressive, possible by the established shape health care.

Iatrogenesis has many dimensions as per Ivan Illich’s concept. The undesirable side-effects of approved, mistaken, callous or contra-indicated technical contacts with the medical system represent only first level of pathogenic medicine. The belief of people that they cannot cope with illness without modern medicines reinforces and lays the ground for iatrogenesis by surrendering themselves to the doctors.

According to Illich, he illustrates that the social iatrogenesisis not yet acknowledged as a collective etiology of sickness. He outlines that the diagnosis often serves as a means of turning political grievances besides the stress of growth into needs for more remedies that are just more of its expensive and demanding outputs; the industrial system would lose one of its major defenses. On the same note, responsiveness of the extent to which iatrogenic ill health is politically-communicated would shake the basics of medical power much more deeply than any catalogue of medicine’s technical faults. Based on this fact, his works and ideas portray the assumption of his research and these shows that he was not a rumourmonger but can be seen as a prophet in several aspects since his predictions indicated the notion of reality.

Iatrogenesis designates a condition of illness, disease, injury or hostile health brought upon a patient as an indirect or direct result of medical diagnosis or cure. Therefore, when it comes to back pain, there are numerous common varieties of iatrogenesis, that subsidize to the on-set of symptoms, as well as the dissemination and worsening of existing conditions. Acute postoperative pain is followed by insistent pain in 10-50% of individuals after mutual operations, such as breast and thoracic surgery, groin hernia repair, and coronary artery bypass surgery leg amputation (Gould, Brooker& Gould, 2008, p.167). Iatrogenic complications are very common most people who are affected are the elderly than the young patients. These complications include the adverse effects as the interactions, falls, nosocomial infections, Pressure ulcers and other relevant complications to surgery, however, prevention is often possible, (O’dea& Erikson, 2010, p.341). For instance, the large percentage that is affected is the men. The statistics indicate that women live longer than women; however, the spend most of their lives with different disparities. The smoking rates between women in UK were slightly low compared to men; thus women smoke 25.1% while men 31.2%.

The initial step in stoppage is to categorize patients at high risk in order to know the way forward in which to help that particular individual. Risk factors may include the following. Prevention is the most crucial factor and determining the effective way to prevent such assumption is to overlook on that factors that contribute to such infections. After full recognition of that factors, focusing on the proper measures that should be taken into consideration to avoid those elements that affect the situation (Miller, 2013, p.178). Thus, interventions that can prevent iatrogenic complications may include the following: addressing proper medication to the patient by relying on primary evidence.

In conclusion, Illich can is considered a prophet and not a rumourmonger. This declaration has evolved from a number of his assumptions on medicine and his approaches towards the medicalization that are entirely based on his research of over twenty years. For instance, in UK there are several individuals who die of diseases linked to the effect of iatrogenesis in every year. This aspect is seen to affect the elderly people more than the young. Illich’s views on medicalization are shown to be very significant to the society as they enlightened individuals to be aware of some aspects that lead to iatrogenesis. With the evidence on health system, his philosophies are examined to be very significant in society since they mainly focused on the main areas that analyze medicalization. His predictions in several aspects support his research on the health systems in society, and this fully defines him as a prophet. It has been documented that no substantial addition to life expectancy or the quality of life critically ill patients has been achieved by high tech cost medical technology.As a contrast, there are many medical interventions, which are simple, cheap and often without any need of medicine yet are quite effective. However, such simple remedies are often neglect or ignored altogether. The medicalization of life encourages our dependence on professional care, and on medical drugs.

Medicine is the biggest epidemic in our time’ was Ivan Illich a prophet or a rumor monger. (2015, Oct 11). Retrieved from https://studymoose.com/medicine-is-the-biggest-epidemic-in-our-time-essay 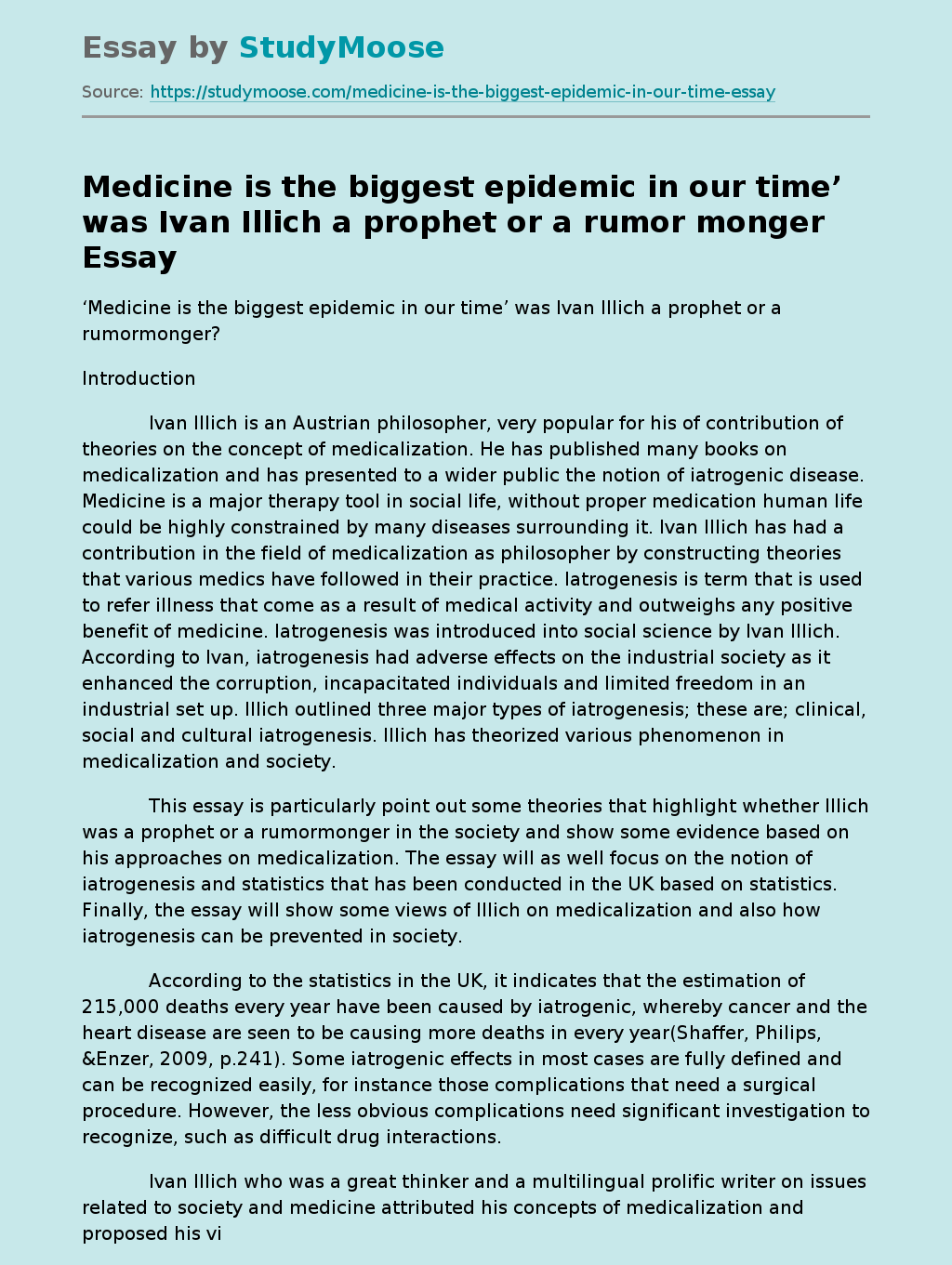