Living in the land of opportunity and freedom has its limits. There is an expectation that every time we visit our doctor’s office that we all will get the highest amount of respect and help that can be given. Growing up, throughout my whole life I have been in and out of the emergency room more times than any normal person probably should have. Just only eleven months ago, I severely fractured my calcaneus (heel bone) into three separate pieces and had to stay in the hospital for four days due to surgery.

Don't use plagiarized sources.
Get Your Custom Essay on Medical Ethics Just from $13,9/Page

Throughout my countless surgeries and visits to the hospital, I cannot imagine myself in a situation where the a doctor would refuse to give treatment or perform any type of procedure to anyone due to his or her personal belief whether it be based on race, sexual preference, political beliefs, or frankly any other reason.

Today there are many Doctors who are refusing medical assistance to patients because of their own personal religious and even political beliefs and values.

It turns out that a doctor’s ability to refuse any kind of service is legal. Randi Kaye, a CNN Correspondent interviewed Dr. Edward Langston at The American Medical Association. The AMA along with the many Doctors agree “Any physician as the opportunity that if because of personal beliefs religious or moral beliefs that they can refuse to provide services, but we also believe that physician has an obligation to provide an avenue where the patient can get the care that they’re seeking,”. One particular case dealing with a man in New Jersey, written by Rmuse, an advocate for freedom of religion and particularly, freedom of no religion. Joao Simoes, a gay, and HIV positive patient at a Catholic Hospital. Dr. Susan V. Borga, came into his room while looking at the medical file. She looked at Joao Simoes and asked him how he contracted HIV. Simoes confirmed that he contracted the virus through unprotected sex.

Dr. Borga then asked if it was due to unprotected sex with another man. As soon as he confirmed that yes, it was with another man, Borga closed his file walked out of his room. Simoes was not allowed to contact his personal physician for three day to help get medication. When he was finally allowed to contact his physician, he was told that he had already spoken to Dr. Borga informing her that Simoes needed his medication. Her response to the physician was that he must also be gay being that he was his doctor. This was followed by “This is what he gets for going against God’s will.” Simone was finally able to get his medication after the hospital allowed his sister to visit and saw that she gave his medication to the nurses.

Another case dealt with a Wal-Mart pharmacy in Wisconsin. Due to this pharmacy being a very busy pharmacy, they contacted a temporary agency because they need temporary assistant. This temporary employee informed Wal-Mart through a written statement that due to his religious beliefs, he would not be able to handle any clients that had any issues with or relating any form of contraception. Wal-Mart decided to compromise with the new employee to where he passes on the client to another pharmacist. When calls were made dealing with contraception, he would place them on hold and not inform anyone. When patients would pick up a birth control prescription, he would walk away and not tell anyone there was a patient waiting. Wal-Mart then tried again to compromise, but when realizing there would be no resolution, he was fired. A last case explained by Jessica Dweck occurred in Florida. “Florida physician Jack Cassell taped a sign to his office door advising Obama supporters to “seek urologic care elsewhere.” The only way that this doctor could be sued successfully is if the patient is currently being treated and was in need of care, that the doctor ceased care without a proper notice or referral for another doctor. A doctor’s visit in not based on political views. The relationship between a doctor and a patient should be based on the physical and emotional wellbeing of the patient.

The main question and concern should be why in the year 2014, when the United States is dealing with terrorism, and teenagers going on a shooting spree at their high schools, is there such a clause that allows Doctors to refuse medical attention towards friendly, innocent Americans based on hatred? Why is it that after so many years of war and innocent blood shed is there still a clause that allows Doctors to refuse medical assistance on the base of religious or personal beliefs? In an online article” Pharmacist Conscience Clause: Laws and Information” explains the reason why it was enacted. The conscience clause was first executed in response to the Supreme Court decision in 1973 in the Roe v. Wade case during the woman’s rights movement. Roe v. Wade ruled unconstitutional a state law that banned abortion except to save the life of the mother. This response caused major uproar to the point where some states proposed legislation and passed laws allowing them to refuse abortions in their establishment. It went as far as pharmacist refusing in supplying refills and prescriptions of contraceptives. These actions resulted in the enactment of the conscience clause. The conscience clause was enacted in order to protect medical professionals from legal action for refusing to assist with contraception and abortion. In fact, many states began to follow with their own conscience clause which also allowed them to refuse medical service and prescription refills according to their idealistic beliefs. Unfortunately, there are also laws that that allows doctors to refuse medical attention to patients due to racism, sexism, or any type of hatred.

“Since 2005, twenty-seven states introduced bills to widen refusal clauses. Four states are considering granting carte blanche refusal rights-much like the law adopted by Mississippi in 2004, which allows any health care provider to refuse practically anything on moral grounds. “It’s written so badly there is no protection for patients,” (Erdely). It is mind boggling to see that this is allowed in the” land of the free”, the State where the people are allowed to be who they want to be, and the possibilities of living a successful and happy life are endless. What seems to be going on, and what we probably should be concerned about is that doctors are taking advantage of the clause and finding loopholes to be able to act upon their bigotry. The system seems to be seriously broken. If something is wrong than it is up to us to make them right. The main concern then should be getting the Obama administration to revoke the conscience clause that was put in place by President Bush right before he left office. If people began signing petitions, and calling the news stations to publicly get the word of the unfair treatment of patients needing medical attention. This method surely would be a great starts in fighting against these unfair acts.

Once the word is out on the streets, multiple legal actions should start to be put into place towards those doctors that placed many lives at risk or altered their lives to a point where they did not want to be. Such examples would be women who were brutally raped and were forced to have the babe due to doctors refusing to help. Or women losing their lives because of internal infections caused by pregnancy.

It is a safe bet that what people want is a life where there is no judgment. A life where the color of skin, political party we, sexual interest, and lastly choices in life that are made good or bad, should not be the determinant nor reason to be handed down a death sentence (Rmuse). Our country should not be stepping back into a life of hate, disregard, and prejudice towards one another. It should be taking a step forward to a place where we all get properly treated and be refused a health service because of hatred.

Medical Ethics. (2016, May 15). Retrieved from https://studymoose.com/medical-ethics-essay 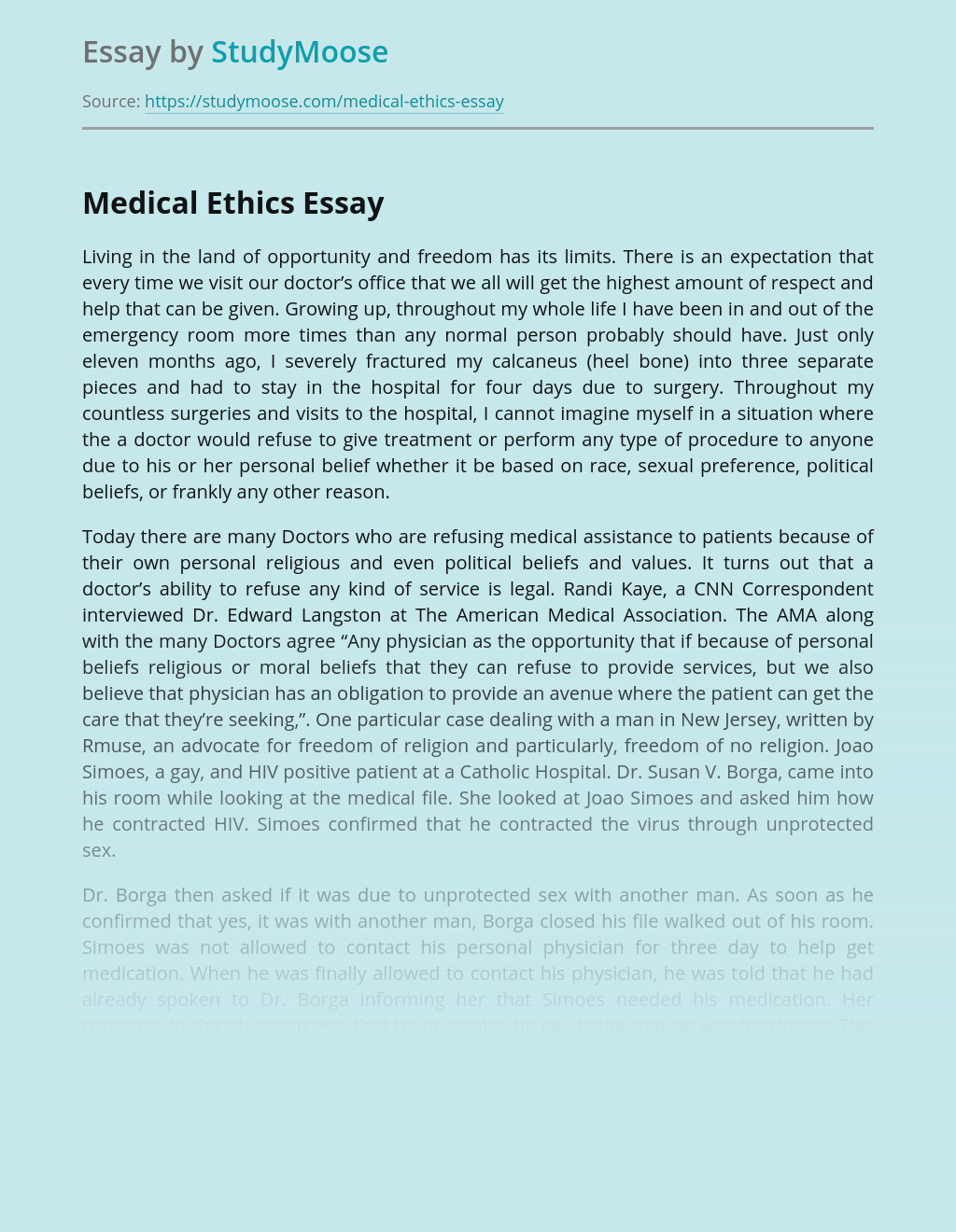 Living in the land of opportunity and freedom has its limits. There is an expectation that every time we visit our doctor’s office that we all will get the highest amount of respect and help that can be given. Growing up, throughout my whole life I have been in and out of the emergency room...

View sample
A Man for All Seasons (Friend or Foe)

In the book, A Man For All Seasons by Robert Bolt there are a few people that can’t be trusted by Sir Thomas More, the main character in the book. Richard Rich is definitely one of those men who can’t be trusted and along with Thomas Cromwell the two destroy More’s life slowly but surely...

Reverent Dimmesdale’s journey through the story shows how his insecurities effect his decisions. Dimmesdale often let his thoughts of rejection from his life as a loved godly man take away from what he needed to do. He shows, by these actions, a want to be accepted that is so strong that it can overpower his...

Prompt 3 “Read carefully paragrphs 11-13 of Orwells Shooting An Elephant. THen write a well-organized essay explaining how the author uses stylistic devices and rhetoical strategies to convey his attitude toward the shooting of the elephant. Elephants were once, and are currently, considered prized possessions in some parts of the world. The taming of these...