There are as many 3. 2 crore cases pending in our courts . The number of pending cases may be due to many loop holes in our legal system , these loop holes are known to us but some of them cannot be dealt with because of stringent laws , moreover to face them and to reduce the number a new thing came into being known as ADR ( Alternate Dispute Resolution ) system which as the name suggests is an alternative system to the commonly followed litigation system which is time consuming and sometimes doesn’t provide a common judgment which may be in favor of both the parties.

Therefore an act came up in year 1996 known as ADR act 1996 which empowered with a parallel legal alternative which was followed In the U. S. A. Implementation of ADR in India: The implementation of Alternative Dispute Resolution mechanisms as a means to achieve speedy disposal of justice is a crucial issue. The sea-change from using litigation as a tool to resolve disputes to using Alternative Dispute Resolution mechanisms such as conciliation and mediation to provide speedy justice is a change that cannot be easily achieved.

The first step had been taken in India way back in 1940 when the first Arbitration Act was passed. However, due to a lot of loop-holes and problems in the legislation, the provisions could not fully implemented. However, many years later in 1996, The Arbitration and Conciliation Act was passed which was based on the UNCITRAL model, as already discussed in the previous section of the paper.

The amendments to this Act were also made taking into account the various opinions of the leading corporates and businessmen who utilise this Act the most.

Sufficient provisions have been created and amended in the area of Lok Adalats in order to help the rural and commoner segments to make most use of this unique Alternative Dispute Resolution mechanism in India. Therefore, today the provisions in India sufficiently provide for Alternative Dispute Resolution. However, its implementation has been restricted to just large corporates or big business firms. Lok Adalats, though a very old concept in Indian Society, has not been implemented to its utmost level. People still opt for litigation in many spheres due to a lot of drawbacks.

Provisions made by the legislators need to be utilised. This utilisation can take place only when a definite procedure to incerase the implementation of ADR is followed. In order to have such an implementation programme, it is necessary to analyse what the problems are and rectify them. Mahatma Gandhi had put in correct words as : “I had learnt the true picture of law. I had learnt to find out the better side of human nature and to enter men’s heart. I realised that the true function of a lawyer was to unite parties riven as under.

The lesson was so indelibly burnt into me that a large part of my time during the twenty years of my practice as a lawyer was occupied in bringing about private compromised of hundred of cases. I lost nothing thereby-not even money-certainly not my soul. ” The Idea behind finding an alternate was to provide if not greater but equal form of justice. Certain things were kept in mind like a)it should provide equality and be fair b) it should same as judgments based on ethics c) it should be within the law framework of the country d) and it should be able to come up with remedies which a litigative system doesn’t provides.

Further one cannot deny the fact that many pitfalls in the Indian Legal System such as delay in justice,expense on drafting , rigitidy of rules and limited participation of parties are few flaws. Every litigant expects to be hared by the judge but due to the rigidity norms its delayed however the rigidity is necessary to maintain the probity of the judicial process. Natural justice as a matter of principle demands judges to hear both the parties in presence of eachother, if it is not than its anathema.

Mediation on the other hand is a process in which a person cannot be judgemental but a fecilitator who is just and views underlying issues who helps in communication between two parties and reach a common solution. He however can furnish a report on his mediation and then forward it to the judiciary. This process involves meeting the parties separately and also together . The matter is discussed and accordingly a common solution is found out which of the benefit to both the parties. The mediator understands the source of conflict between the parties and within the parameters of laws suggests them a solution thus creation new ideas.

These are advised to the parties and its further for them to accept it. Besides that in mediation process one understands the situation of the other and accordingly reach the conclusion. In the Indian legal system the adversarial nature of our lawyers which involve confliction views are necessary adjunct to effort of the court to investigate facts. But here an individual client feels marginalized in the presentation of his viewpoints by his lawyer before the court as litigants who contest in person give vent to their emotion,opinions,perceptions and interests.

Thus mediation calls for in person involvement of a person so that his views are expressed and his emotions. interests, concerns, receive empathy and process is practical. Always judicial remedies are not geared to accommodate. Mediation provides a real alternative as mediation outcomes are less likely to be evaded and parties look beyond the formal confines of a legal dispute. Some cases are not be dealt in conventional court setting such as business and personal relationship where confidentiality is an important aspect. Therefore they require mediation . 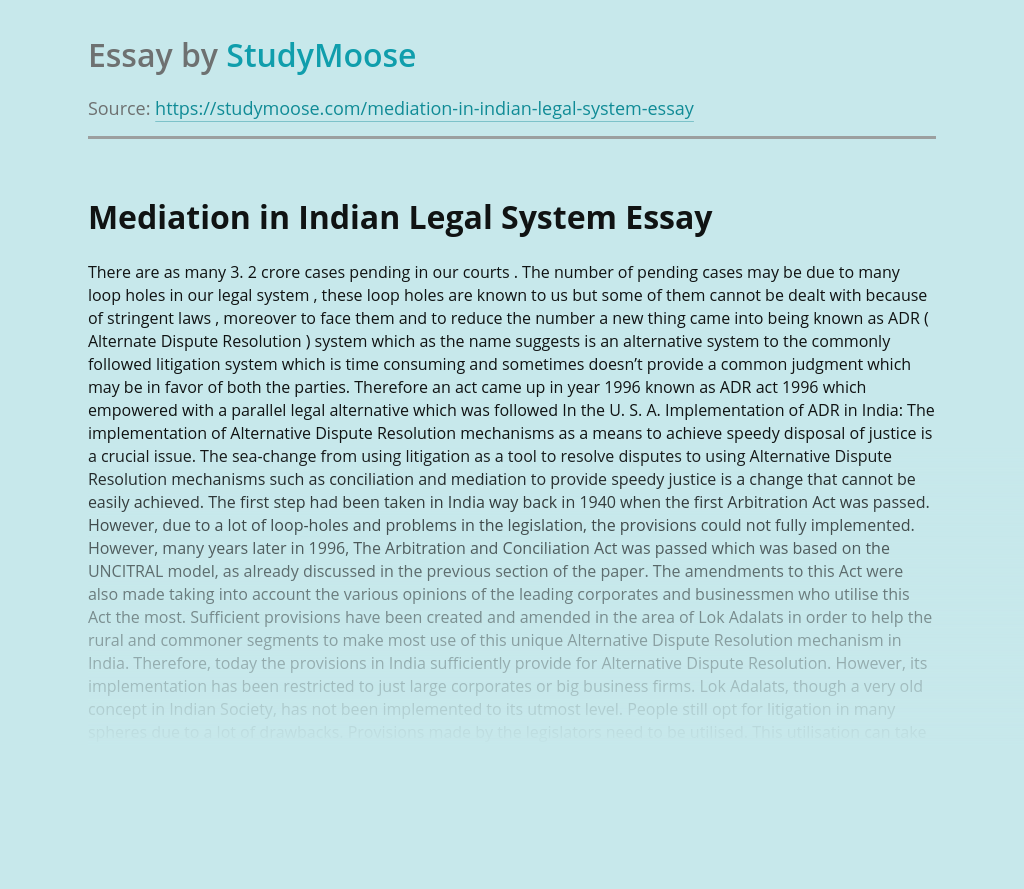