Media: The Fourth Pillar of Democracy

Today, media is considered the fourth pillar of the state all over the world; first and foremost British Member of Parliament Lord Macaulay had given this status to the media. In any republican government system, there must be three administrative bodies, 1- Parliament, 2- Administrative department, 3- Judiciary body. In the absence of any of these three bodies, the government cannot run systematically, but now it is felt that one body more is necessary to be with them, that is media.

Don't use plagiarized sources. Get your custom essay on
“ Media: The Fourth Pillar of Democracy ”
Get custom paper
NEW! smart matching with writer

This body is considered more important these days, it plays an important role as an informative bridge between governing bodies and general public, in absence of media general public cannot know about what kind of bills and acts are passed in the parliament, and what are their positive and negative effects in the society. If media person close their eyes the government officials will do what they want, so media plays a very important and impartial role between government activities and general public, so much so that it is said that the freedom of media is the guarantee of success for a government.

Below mentioned are a few recent incidents in which media played a key role and established itself as the fourth pillar of democracy. Delhi Rape Case

The media played an important part in raising a debate on women’s safety. As the news of the rape broke, the media went into frenzy, not just in tracking the case but in leading people to introspect. A responsible section of the media asked people to be part of radical reforms the country required while it continued to give expression to the public grief, the mourning and reconciliation as people watched in horror the victim’s final moments.

As the movement to bring the gang rape victim to justice went viral, the nation saw a major protest that spread on streets across the country. The media extensively covered the demonstrations, following the protesters; giving their demands for justice a voice and bringing them to the centre of the political debate. It exposed the growing crime statistics, especially in Delhi, against women.

The media led bare the growing frustrations of an entire emerging aspirational urban class and generation Rapes that are taking place are being continuously reported in major newspapers with more prominence than before, even though they are not always given the front page coverage. One is assured that the December 16 gang rape incident will continue to be a milestone when covering issues related to women’s safety. This movement goes to prove that the democracy’s fourth pillar can transform incidents of national shame to national justice by establishing confidence in institutions that have been created to protect the citizens of the country. The Anna Hazare Movement

The news media, particularly, the TV channels have played a key role in keeping up the tempo of the movement by ensuring round the clock coverage, they ensured that the protests occured across the country and there was a mass frenzy. Even though the channels didn’t state much about merits and demerits of the proposed institution of Lokpal or educated citizens about the implications of the ombudsman, TV and newspapers were visibly the driving force behind the anti-corruption movement. The movement was a perfect example of how media can be used effectively. Though the propriety regarding active participation of news media in a movement is debatable, it is true to an extent that Indian media has voluntarily become a party, a sort of participant, in this drive for Jan Lokpal Bill. The Egyptian revolution

The Egyptian revolution began on Facebook with a call to protest in Cairo’s Tahrir Square. Protesters used Twitter to manoeuvre around police and reach the area. People arrived at the location expecting to see a few hundred like-minded individuals. Instead, they found a few hundred-thousand. Until they reached the square, Egyptian dissidents had no clue of their strength. It was a remarkable indication of the power of social networks as a political organizing tool, as has been seen in many uprisings sweeping North Africa and the Middle East. Around 20 million people in Egypt, or about one-quarter of the country’s population, are on the Internet. Early in the political unrest, the Egyptian government attempted to block Facebook and Twitter, then took the unprecedented step of shutting down Internet access in the country altogether. The cyberspace blackout lasted a week but could not thwart the revolution. President Hosni Mubarak stepped down a week later.

Media: The Fourth Pillar of Democracy. (2016, Apr 20). Retrieved from https://studymoose.com/media-the-fourth-pillar-of-democracy-essay 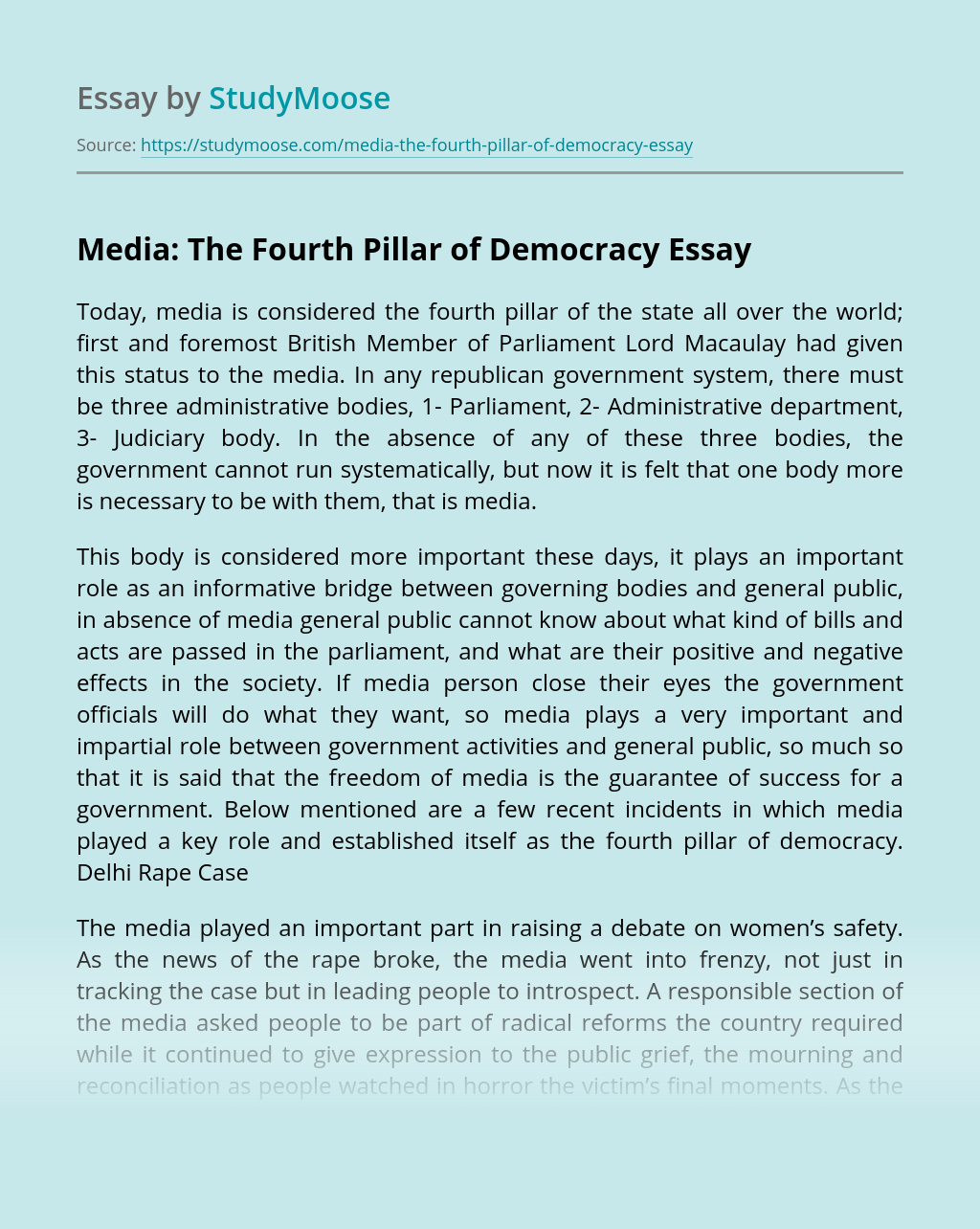