1. Whether, as a Member of Parliament (MP), the Accused’s right of free speech in Parliament, given by sections 3 and 8 of the Houses of Parliament (Privileges and Powers) Ordinance [No. 15 of] 1952 and Article 63(2) of the 1957 Federal Constitution, has been validly limited by the subsequent amendment made to Article 63 with the addition of Clause (4) by the Constitution (Amendment) Act. 1971 (Act A30).

2. Whether the Accused’s right of free speech in Parliament is part of the Constitution’s basic structure or a fundamental rule of natural justice, thus rendering any supposed amendment of the Constitution seeking to limit such right is void and of no effect.

Turn in your highest-quality paper
Get a qualified writer to help you with
“ Media Law Case Studies ”
Get high-quality paper
NEW! AI matching with writer

3. Whether the demand for closure of Chinese and Tamil schools in the process of implementing the national language can be legally and constitutionally treated as questioning Article 152(1) and thus, bringing into operation section 3(1) (f) of the Sedition Act 1948 (Revised 1969), despite there not being a demand for the abolition of prohibition of the teaching or learning of such languages.

1. While Sections 3 and 8 of the Houses of Parliament (Privileges and Powers) Ordinance 1952 as well as Article 63(2) of the Constitution grants an MP freedom of speech in Parliament without being held liable to be prosecuted or questioned in court, the subsequent addition of Clause 4 in Article 63 states that Clause 2 is not applicable to any person who has committed an offence under Article 10(4) or the Sedition Act 1948. Noting that the Accused is charged via the Sedition Act, it is clear that the Accused’s right of free speech in Parliament is limited by Clause 4 of Article 63.

2. The Accused’s right of free speech in Parliament is not instrumental in forming the basic structure of the constitution. Thus, it was deemed unnecessary to decide whether or not any amendments made to said Article will destroy the Constitution’s basic structure. In addition, the Accused’s right of free speech is not part of the fundamental rule of natural justice. Therefore, the amendments made to Article 63 – the addition of Clause (4) limiting MPs’ right of free speech in Parliament – are valid. 3. It was decided that it would be premature and speculative to answer this question at the present stage. The answer is deemed to be bound up with uncertain facts of the case and any proceedings made would be based on assumptions. Counsel was advised to forward the submission prepared to the trial Judge, of whom the case was further referred to.

The case was accordingly directed to the learned trial Judge for continuation and disposal in accordance with the aforementioned judgment and otherwise according to law.

Title and Citation
Public Prosecutor v. Param Cumaraswamy
[1986] 1 MLJ 518
Facts
The accused, Vice President of the Bar Council Param Cumaraswamy, was charged for committing an offence under Section 4(1)(b) of the Sedition Act 1948 (Revised 1969) for uttering seditious words during a press conference at the office of the Selangor and Federal Territory Bar Committee on 24 July 1985. The accused was making an open appeal to the Pardons Board to reconsider the petition of Sim Kie Chon, who was charged under the Internal Security Act for possessing an unlicensed forearm, for the commutation of his death sentence.

Reasoning
1. Uttered words can only be considered seditious if they achieve one or more of the instruments specified in Section 3(1) of the Sedition Act. Section 3(1)(d) of the Sedition Act 1948 states that for uttered words to be considered seditious, it must be capable of raising discontent or disaffection amongst the people of Malaysia. The press statement was an open appeal to the Pardons Board urging them to exercise their powers uniformly so that the people would not be made to feel that the Board was discriminatory. It was agreed by the Court that the words which were used were unlikely to create discontent or disaffection neither among the people nor against the Authority i.e. Yang di-Pertuan Agong, any other Rulers of State and the government.

2. Section 3(1)(e) of the Sedition Act defines an act with seditious tendency that is capable of promotin feeling of ill-will and hostility between different classes of the population of Malaysia. In one part of the press statement, Cumaraswamy pointed out to the Pardons Board that the people should not be made to feel that the Board was discriminating between “the poor, the meek and the unfortunate” and “the rich, the powerful and the influential”. The court agreed that instead of trying to promote ill-will and hostility between the different classes of the population, Cumaraswamy was in fact urging the Board not to create the feeling or impression among the population that the Board was discriminating between the different classes.

3. Section 3(1)(a) stated that a ‘seditious tendency’ is a tendency to bring into hatred or contempt or to excite disaffection against any Ruler or against any Government. It should be noted that Cumaraswamy’s appeal was directed at the Pardons Board and not at the Ruler i.e. the Yang di-Pertuan Agong. Hence, it is clear that the statement did not carry the tendency to bring upon hatred of disaffection against the Ruler.

Mr. Cumaraswamy was found not guilty of sedition. He was subsequently acquitted and discharged.

Title and Citation
Public Prosecutor v. Pung Chen Choon
[1994] 1 MLJ 566
Facts
The accused, Pung Chen Choon, editor of newspaper The Borneo Mail, was charged of maliciously publishing false news in The Borneo Mail dated 16 July 1990, stating that Benjamin Basintrol, a priest, had been arrested under the Internal Security Act 1960 (ISA), whereas another priest was on the run from the police and several others were understood to be on the ‘wanted’ list. He was charged with an offence under Section 8A(1) of the Printing Presses and Publications Act 1984 (PPPA). He was prosecuted in the Magistrates’ Court in Kota Kinabalu. A few issues were raised, leading to the case being forwarded to the High Court and subsequently, to the Supreme Court.

2 & 3. Although not all false news, even if maliciously published, falls within the stated restrictions in Article 10(2)(a), it is possible that the malicious publication of false news could incite acts which jeopardize the internal security of the country, undermine Malaysia’s friendly relations with other countries, lead to disturbance of public order, and incite the commission of offences. Hence, it can be said that Section 8A of PPPA falls within the orbit of permitted restrictions in Article 10(2)(a) of the Constitution and is constitutionally valid.

4. Section 8A(2) of PPPA is merely a statutory presumption which operates at the trial stage, arising only if the prosecution are able to prove – when prosecuting the accused in court – that the news published is false. Section 8A(2) is, in no way, equated with pre-censorship, which can only take place before publication. Moreover, Section 8A(2) does not restrict freedom of press either directly or indirectly. Hence, the answer to Question 4 is ‘no’. Held

The case was forwarded to the magistrate to proceed with the hearing, taking into account the answers to the questions presented, to determine whether the offence charged has been ascertained by the prosecution beyond all reasonable doubt. 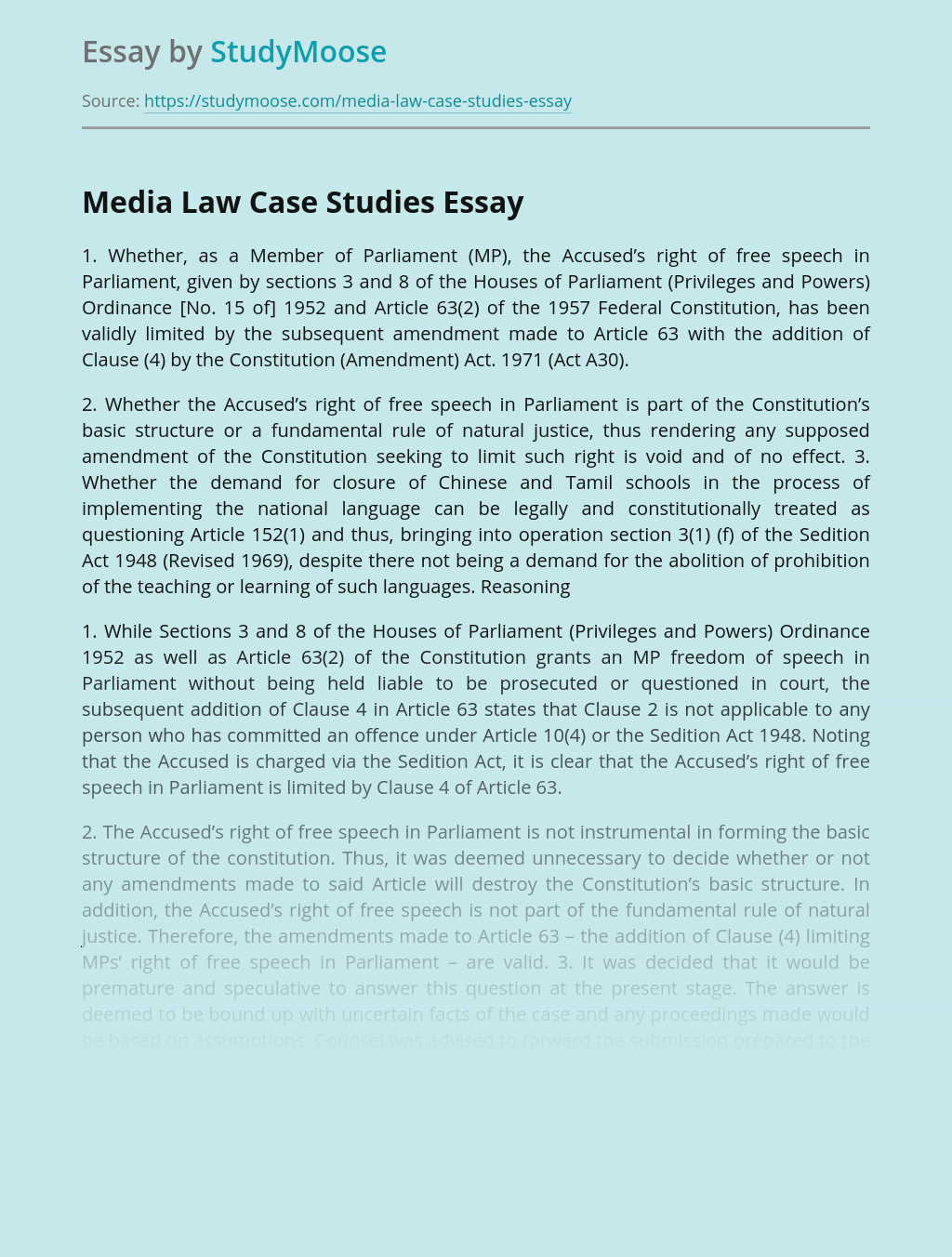 Turn in your highest-quality paper
Get a qualified writer to help you with
“ Media Law Case Studies ”
Get high-quality paper
Helping students since 2015
Stay Safe, Stay Original