Netflix is a media service provider whose primarily model is streaming media based on subscription. Netflix has over 137 million subscribers worldwide. It releases more original tv shows and films than any other cable channel. Netflix’s streaming services allows subscribers to watch television series and movies through their platform on smart TVs, smartphones, tablets, and other digital media devices(Matrix,2014).

Big Mouth is an animated adult television series offered on Netflix. The show is about how teenagers are faced with challenges of puberty.

Don't use plagiarized sources. Get your custom essay on
“ Media Analysis ”
Get custom paper
NEW! smart matching with writer

The main characters of the show include Nick Birch who is a little boy nearing adolescence, his parents are loving and often overprotective.

Maurice is a hormone monster assigned to Andrew and is responsible for guiding him through his sexual needs. Coach Steve is a talkative character who is lonely and behaves like a child. Jessi is a smart girl who got her first period while on a school trip. Jay is a magician obsessed boy who frequently has sex with his pillow which later got pregnant. Connie is a hormonal monster assigned to Jessi and cheers her on to act according to her desires.

The ghost of Duke Ellington resides in the attic of Nick’s attic and offers him advice.

The first season has ten episodes same as the second season. A third season will also be produced.

The series is comical and shows the various stages of becoming an adult. The series is relatable and captures almost clearly the changes that occur during puberty. Adult animated series is slowly becoming a norm as there are many series of this nature that contains adult material. The series does not put any effort in censoring the content. Talking to children about sex is often a difficult task for parents and most children discover on their own the wonders of their body. Girls go through physical changes like growing breasts and go through menstruation. Boys on the other hand develop deep voices and get attracted to things they were not attracted to like female breasts.

Menstruation is regarded as something embarrassing in the society. In the series, Jessy experiences her first menstruation and in a comical way, we are shown how the hormonal changes affect her attitude. This is what women go through.

The transition to adulthood is accompanied by physical changes. Growth of pubic hair, sexual features, deepening of voice, muscles, and also growth in general. In the series, Andrew’s genital has already developed while Nick has trouble with his. Jessy also compares her breasts with other girls and starts even to wear new bra to school so as to highlight her breasts.

Homosexuality is also captured in the series. Jessy’s mom is attracted to another woman but hides it from other people because she feels insecure. Jessy finally discovers and confronts her about it. Mathew is also homosexual and is not ashamed of his sexual-orientation.

Sexual abuse is also captured in the series. Leah, Nick’s sister, is forced to perform oral by her boyfriend, Daniel. Leah clearly does not fancy such practice. Daniel is hated by everyone in the room for pushing Leah. The series tries to warn people from abusing other people sexually. As Jessy wears her new bra to school, the boys are caught throwing glances at her and some even wat to touch her breasts. Jessy is a brave woman and confronts the boys.

Family is important for growing children. In the series, family is diverse and family issues are put on the spotlight. Nick seems to have a model family where everything is going well while Jay and Jessy’s families are in despair. Also, the teenagers must form imaginary friends from whom they get advice because their families do not want or do not have time.

The television show is all about puberty and the changes that accompany it. It also tries to show that such changes should not be embarrassing because it is a stage in nature’s masterplan. Menstruation marks womanhood and women should not feel embarrassed about it, same goes to breasts. The series also captures a lot in the sense of sexual abuse, male chauvinism, family, pornography, sexual orientation among others. In the society, young adults should be hailed and understood as they are going through changes. Families should try and support these young people and educate them on what they are going through.

The content of the show is vulgar and is appropriate for adults only. It tries to capture the hormonal and physical changes that take place in puberty. It also shows how these hormones affect the behaviour of young adolescent adults. In terms of impact to the society, it shows us what teenagers going through puberty experience and what mechanisms should be put in place the aid their transition. This has a positive impact on the society because it is informative and shows us how to deal with young adolescents. 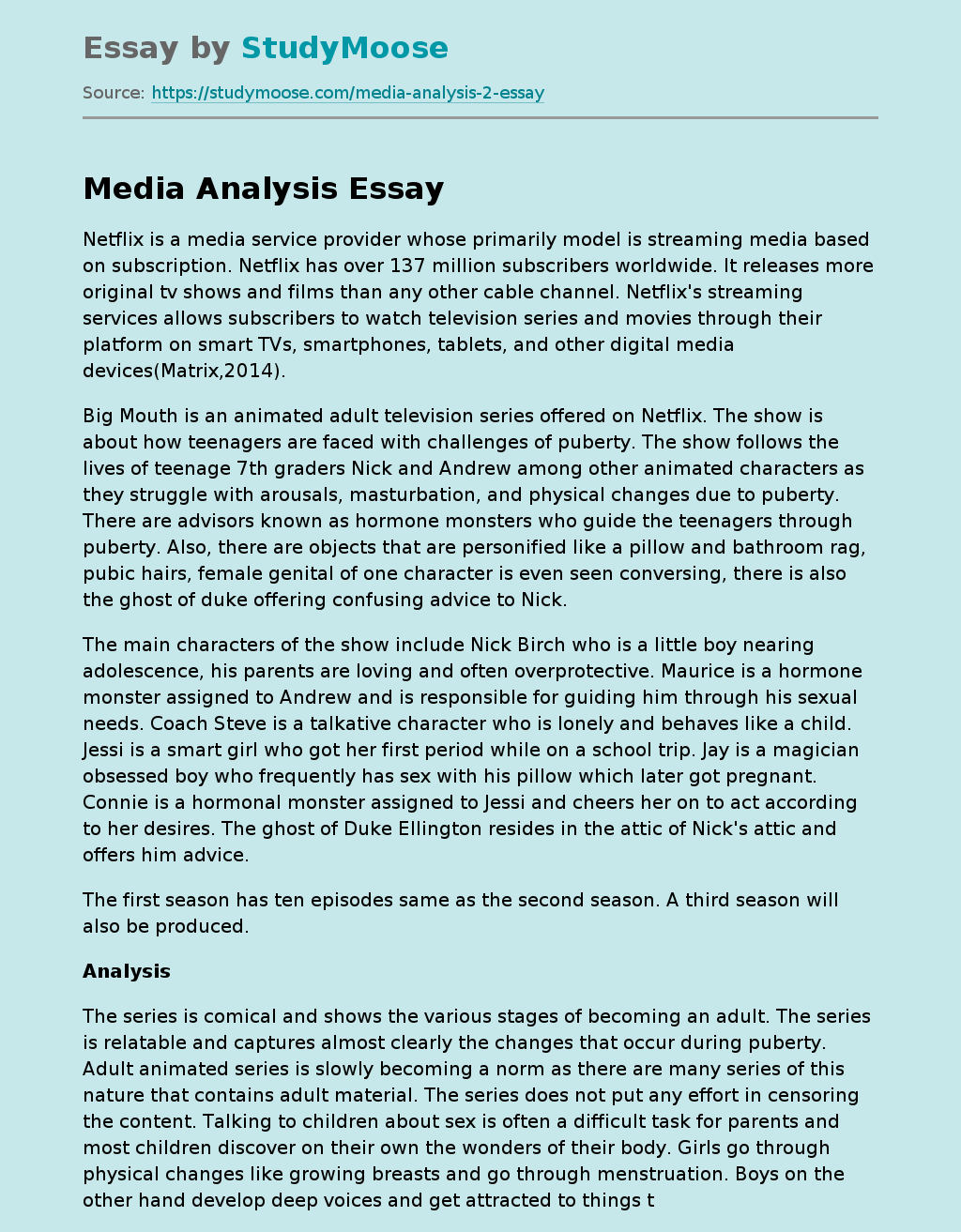