Using only act 1 of measure for measure, describe the state of Vienna at the beginning of the play. What do you think of the situation of a) the duke, b) Angelo in this act? Although act 1 is a relatively short one, the audience is made aware of the current state of Vienna. In scene two Lucio, Gent 1 and Gent 2 discuss prostitution within Vienna. Shakespeare uses the three characters to transfer this information to the audience. We are told that several brothels situated on the outskirts of the city and have simply moved to a new location and acquired the title of ‘bath house’ in order to avoid closure.

Don't use plagiarized sources. Get your custom essay on
“ Measure for Measure-A Problem Play? ”
Get custom paper
NEW! smart matching with writer

The jokes at the beginning of scene 2 and the re-0ccuring references to se suggest that sexual activity is an indicator as to the popularity of sex and the sex trade with the confinements of the city. When mistress Overdone arrives in the scene the point is supported further. The state of the justice system is emphasised when Angelo undertakes authority.

As illustrated by Claudio’s situation, we are given the information that, as with many of the laws and statutes in Vienna, the laws that have condemned Claudio to death fail to take into account the mitigating circumstances.

There appears to be no logical sense to many of the laws held by Vienna. Claudio’s conviction illustrates that authority is able to demonstrate their power in controlling individuals as far as sexual related laws go, but they are unable to control the prostitution that is conducted illegally within their city, giving views the impression that the criminal justice system employed by the state does not really have as much control over the population as one would expect them to have.

In act 1 of Measure For Measure, the Duke hands over his authority for what we are told is a temporary basis to Lord Angelo. By doing this, we, as the audience, assume that he sincerely likes and has faith in Angelo. The Duke comes across initially as being a level headed man who appears to have sympathetic, understanding nature. He tells Lord Angelo in scene 1 that as a duke “mortality and mercy in Vienna live in thy tongue, and heart”, this, dim my view, is his subtle way of telling Angelo that he should incorporate his own beliefs and values when using the justice system, and to use his initive.

By the time the play reaches scene 3 of act 1, it is made clear to the reader that the Duke has an ulterior motive to his assigning his authority to Angelo. Not much information is actually given away about the Duke, as he only appears in two of the four scenes, both of which are conversational scenes that give away little of the Duke’s personality. He remains quite a mysterious character, which sets him apart from the other characters.

We are little to no information about his background or lifestyle; therefore the audience has little information on which to base their opinions. In the first scene of act 1, Angelo is asked by the Duke to assume authority in his absence, Angelo’s reaction to this, is asking the Duke to allow him to gain more experience before assigning a task of such importance and responsibility upon him.

This gives the audience the faint impression of low self-confidence and self-esteem, as we assume he does not feel he is able to meet the Dukes requirements. One of which is to use his initive in “morality and mercy in Vienna”. By the time the play reaches the end of scene 2, the perception we established of Lord Angelo in scene 1 as being insecure, changes dramatically by his attitude towards Claudio’s situation.

There appears to be no obvious sense to his decision to execute Claudio, as a result Juliet will be deprived of a husband and a father for her baby, it is implied to the audience that Angelo is making an example, this is going against all advice given to him by the Duke as he is only thinking with his head and is not incorporating his heart. This gives off a pre-conception of a cold-hearted man and sets his up as the ‘baddy’ of the play at this point and appears to be showing off his newfound power.

The other characters in the play pick up on this cold-heartedness and describe him as being “a man whose blood is snowbrooth; who never feels the wanten strings and motions of the senses”. In my opinion, this is a relatively accurate description of the man portrayed by Angelo at up until this point of the play. Angelo’s attitude until the end of act 1 regarding his authority is a some what arrogant one, Angelo himself does nothing apparent to suggest otherwise, again this reflects badly on him as a person as well as an authority figure. 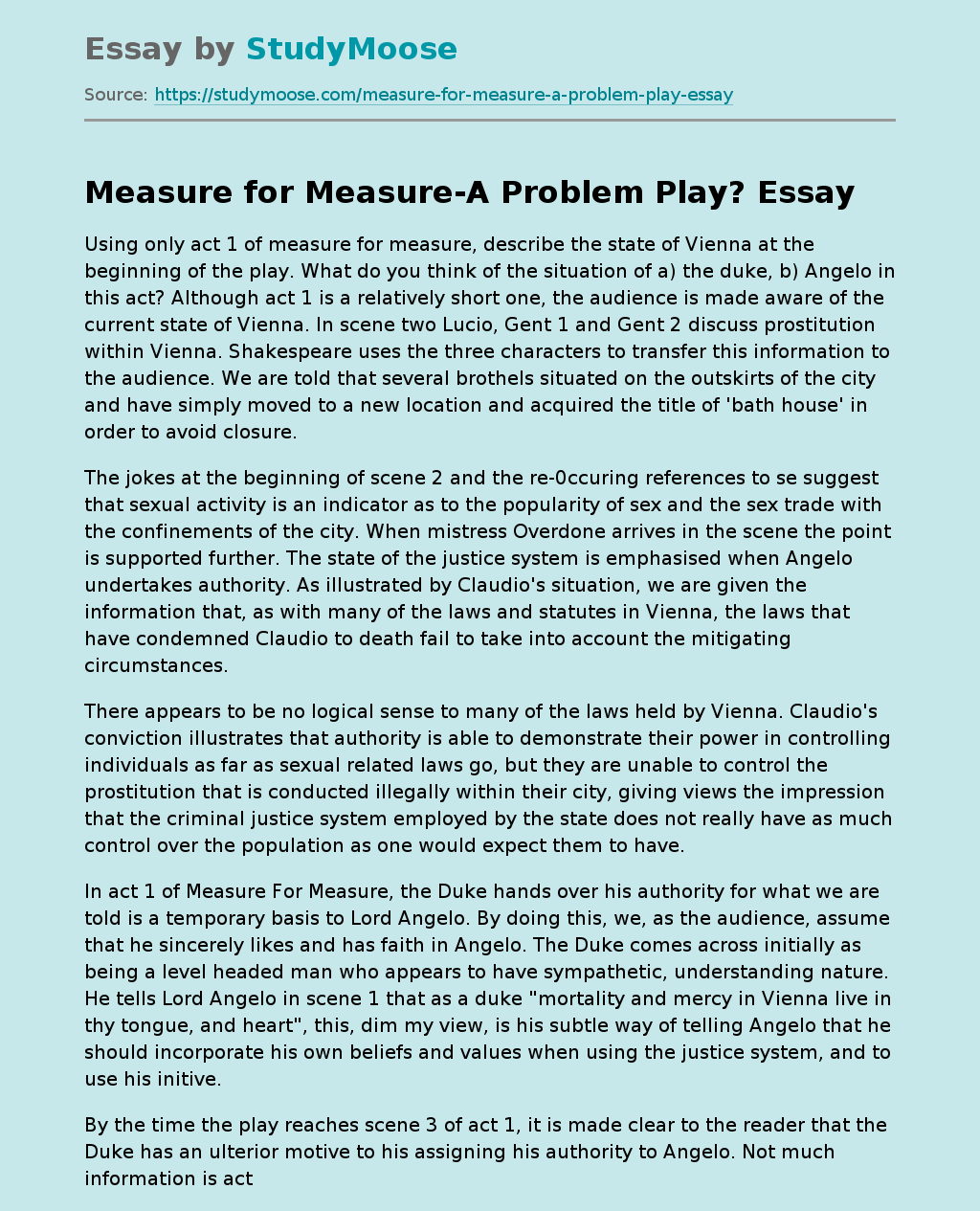