McDonald’s was invented in the year 1940 and has currently about 34 000 restaurants in the whole world. Since McDonald’s was found they established loads of shops especially in Europe and America. McDonald’s is obviously a private company and is owned by a head of shareholders. It was found by Richard and Maurice McDonald’s and until today they don’t get any support by the government. Today, the company is leaded by Andrew J McKenna as chairman and Don Thompson as president and CEO of the organisation.

Don't use plagiarized sources. Get your custom essay on
“ Mcdonald’s Business Type and Purpose ”
Get custom paper
NEW! smart matching with writer

These people are the main decision makers within McDonald’s organisational structure. This business is one of the main fast food companies in the world. This means they produce food, but get supplied by several other businesses. They are settled in the secondary and tertiary sector, cause they’re not actually producing each part of the food they sell, but they do combine products to another saleable product. McDonald’s is combining supplier’s goods to actual fast food products and I selling them.

Therefore they’re settled in the restaurant sector. McDonald’s is a franchise and public limited company.

Franchising a business means that the company, even though it is owned by a head of directors, they sell several shops to private people, who pay for using the companies name and selling the whole menu of this business. They still have restaurants which are actually controlled and managed by the McDonald’s company, but even the shops the franchised, they still own and control the actions and on- goings in each shop and restaurant.

By franchising the companies name they give people, who want to be independent, the opportunity to find a quick start into the worlds market of restaurants.

Loads of small business fail to get widely accepted and fail to make their name famous. McDonald’s is a name the public trust and it’s much easier to sell the services and goods. Independent managers of a franchised shop don’t just have to pay for using products and names, but have to stick to the companies rules and can’t produce or establish other products. Usually the franchisees are limited responsible and have limited liability for the on- goings in their shops. They are partly responsible for mistakes their employees do, but there are main subjects which lie completely on the actual business and their directeurs, McDonald’s.

McDonald’s is basically raising money by selling produced fast food products and fro example franchise contracts. The owner of any franchise organisation earns money from each franchised shop. They get a fixed percentage of the income of each shop and McDonald’s gets paid for allowing other people to use their name and produce their products. Public limited company means that the organisation is owned and controlled by shareholders. They have a limited liability, because the concept of them is it to sell shares of the company.

Therefore they’re no longer unlimited responsible for all their shops. They raise money by selling their shares, because the private people who buy them are able to use the product and the name of the company for their shop. In addition they raise funds by selling their products to costumers. They get profits from each franchised shop and obviously from the shops which are actually owned by McDonald’s. The profits are shared between the shareholders and the owners of the company. The percentage is fixed in a contract. 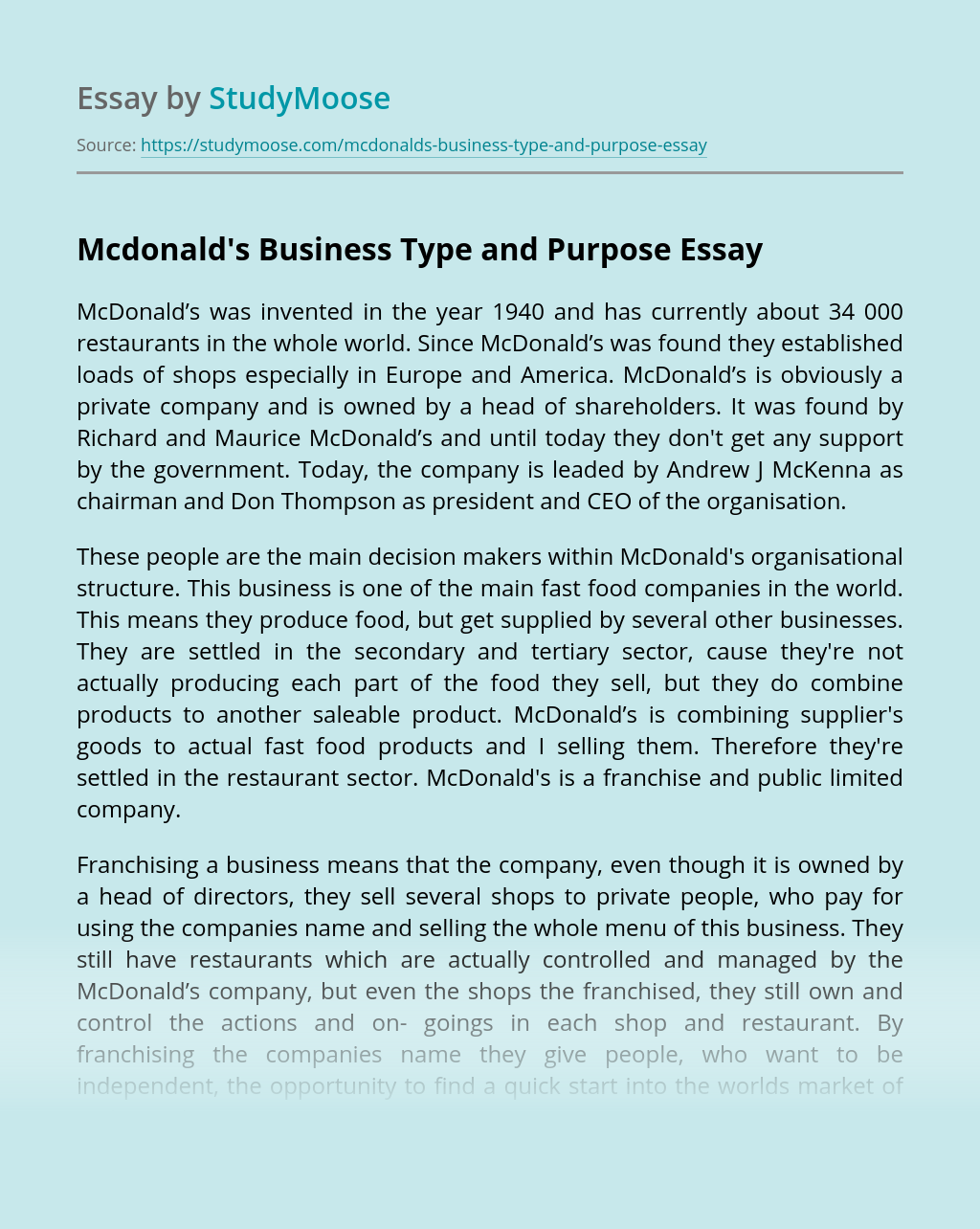