McDonald’s Corporation is the world’s leading food service organization. By 1967 McDonalds expanded its operations to countries outside the U.S.A. This unyielding expansion led the Corporation to open 23,000 McDonald’s restaurants in 110 countries in 1994, producing $3.4 in annual revenues. In addition, McDonald’s opens a new restaurant every three hours and has twice the market share of its closest U.S. competitor, Burger King, representing 7% of total U.S. eating-out sales. Similarly, McDonald’s serves about 1% of the world’s population on any given day through its 23,000 restaurants internationally.

Turn in your highest-quality paper
Get a qualified writer to help you with
“ Mcdonald’s Business Plan ”
Get high-quality paper
NEW! AI matching with writer

Big Mac, the world’s most sold hamburger was developed by Jim Delligutti in 1967 to feed construction workers. ‘Big Mac’ is the biggest attraction and backbone of the corporation. Moreover, McDonald’s maintains its competitive advantage by constantly creating new items to add onto its menu. This shows us that McDonald’s practices an analyzer type of strategy, introducing new items and defending its existing ones. This is a sample business plan and here we reflect our standard business plan model, some of the numbers shown in our following Financial Plan are fictitious, so be advised.

1.1 Industry
McDonalds Industry is one of the biggest food chain companies around the world; is the world’s largest fast food restaurant chain, with over 32,000 locations in over 110 countries. McDonald’s operates its own restaurants and franchises its brand to local businesspeople (about 70% of the world’s McDonald’s restaurants are franchised). In the U.S, McDonald’s focused on increasing sales at existing locations by renovating stores, expanding menu options and extending store hours.

Internationally, McDonald’s expanded aggressively, opting to franchise rather than operate its new locations, providing new income with little overhead. Domestically, McDonald’s continues to perform well despite a pullback in consumer spending and is even benefiting as consumers trade down from more expensive eating options and at the same time, international operations are driving profit growth. 1.2 Target Customers

McDonald’s uses demographic segmentation strategic with age as a parameter. The main target segments are children, young adults and the busy executive on the go. Kids reign supreme in FMCG (Fast-moving consumer goods) purchase related to food products so, to attract children McDonalds has Happy Meal with which toys ranging from hot wheels to various Walt Disney characters, the teenagers with the price on the products to satisfy their expectative as well as the facility of the WI-FI which it makes it attractive to most of the student’s college students.

Also, the strategy is aimed at making McDonald’s a fun place to eat attracting the young urban families wanting to spend some quality time while their children have fun at the outlet. 1.3 Competitor Analysis

McDonald’s is the clear leader of the fast food industry in terms of revenues generated and restaurants established; it faces competition from other fast food chains which are introducing new products themselves. The major direct competitors in the (hamburger-based) fast food industry that includes: Burger King the second largest hamburger fast food chain, Wendy’s which are the third largest hamburger fast food chain, and some others. McDonald’s also competes with non-hamburger-based fast food restaurants, local and national dine-in restaurants (such as Red Robin’s and Shari’s), pizza parlors, coffee shops (Starbucks), street vendors, convenience stores and supermarkets. But, even though McDonalds still the most famous and visited by the different types of families worldwide. 1.4 Company Description

McDonald’s was founded and started franchising in 1955. A man name Ray Kroc, who was a milkshake mixer vendor, came across brothers Dick and Mac McDonald, who were running a small hamburger stand. He saw how quickly customers were being served and suggested the brothers open a chain of restaurants. They did, and Kroc became their business partner. McDonald’s, and the signature golden arches, have since become internationally recognized symbols. Their signs proclaim “millions served,” and that is not an exaggeration. With over 32,000 locations worldwide, McDonald’s is the leading global fast food franchise. 1.5 Products / Service Plan

Customer perception is a key factor affecting a product’s success. Many potentially revolutionary products have failed simply because of their inability to build a healthy perception about themselves in the customers’ minds. McDonalds being an internationally renowned brand brings with it certain expectations for the customers that expect to be in a hygienic ambient and a little sophisticated brand that respects their values. The customer’s expect the brand to enhance their self-image. Customer responses obtained at the Vile Parle, Mumbai outlet confirmed the fact that they connect strongly with the brand. However, fulfilling some of the customer expectations like a broader product variety provide McDonald’s a great scope for improvement.

1.6 Mission and Vision
Vision: Is to be the world’s best quick service restaurant experience. Being the best means providing outstanding quality, service, cleanliness, and value, so that we make every customer in every restaurant smile.

Mission: Be the best employer for our people in each community around the world; deliver operational excellence to our customers in each of our restaurants; and achieve enduring profitable growth by expanding the brand and leveraging the strengths of the McDonalds system through innovation and technology. Marketing Plan

3.1 Market Description
There are close to 50,000 fast food chains across the United States, with McDonalds being the largest restaurant chain. In the world, there are more than 500,000 fast food places. Kids between the ages of 6 and 14 eat fast food 157,000,000 times every month. Ninety-six percent of kids in school could recognize an image of Ronald McDonald, the face of McDonalds. The only recognizable figure that ranked higher was Santa Claus. To top it off, Americans spend nearly $100 billion on fast food every year. There are around 13,000 McDonalds in the U.S. 40% of all of American family meals are eaten outside the home. 3.2 Market Facts

McDonalds has grown rapidly in the last 10 years, following are some points related to the fast food customers in the USA. * 40% of all of American family meals are eaten outside the home. * 1 in every 4 Americans eat at a McDonalds on a daily basis 11

* McDonalds sells more toys than Toys R Us each year.
* With all the tests scientists did, they came to the conclusion that many children can recognize McDonalds before they can even speak.
* Over 25 percent of Americans consume fast food every day 3.3 Market Growth

Fast food restaurants in the USA are getting more demanding with the passage of time. Following are some common demands that have arise in the recent past. 1. Affordable: Fast food is affordable people and families with low income are able to afford the food from fast food restaurants. 2. Convenience: Families today are always on the go between works, school, and after school activities the quick accessibility to be able to order, get served, and eat a meal in just minutes makes it convenient for families today.

3. Easy access: They are now the world’s leading fast-food retailer, with more than 30,000 restaurants serving more than 52 million people in more than 100 countries each day. This makes it easily accessible for everyone. 3.5 Market Opportunities

McDonalds offers a lot of opportunities for existing and potential investors. Their market is growing for many reasons some of them are the following: 1. More than 70 percent of McDonald’s restaurants around the world are owned and operated by independent local businesspeople. 2. The most frequently used method to buy a McDonalds franchise for sale is by buying an existing restaurant. 3.6 Barriers to Entry

Government regulations, economies of scale, customer loyalty, advertising budget, and an exclusive agreement with suppliers are some barriers to entry for the fast food industry.

3.7 Targeted Audience
McDonalds will be starting its operations in Miami, Florida. McDonalds target their advertising at children and students which is an important market for them. A parent with children might visit which gives children a treat. McDonald’s Happy Meals are one example, which includes a toy often, tied in with a newly-released children’s film, building playgrounds inside their restaurants, and creating one of the world’s best-known mascots, Ronald McDonald. The children want to visit McDonalds as it is a fun place to eat. McDonald’s was the first chain to put its restaurants near—and inside—schools as a strategy to market to children.

In Chicago, one of the chain’s biggest markets, more than 90 percent of the city’s McDonald’s were located within walking distance of a school. Children watch, on average, an hour of fast-food commercials on television each week—more time than many children spend playing outside. The average child sees about 20,000 fast-food commercials every year. In 2006, fast-food restaurants sold more than 1.2 billion kids’ meals with toys. An estimated 20 percent of public schools sell branded fast food, mostly in high schools, where kids have more discretion to buy “a la carte,” rather than from the regular lunch program.

3.8 Competition
In one sense, McDonald’s doesn’t have any real competitors, as they are the largest restaurant chain worldwide. But some of the other restaurant chains large enough to cut into its market share include Burger King Corporation. So how is it possible for Burger King to go up against history itself? Surprisingly they did and even though McDonald is still the best fast food franchise Burger King is trailing by not too far. One of the reasons why Burger King was so successful includes many factors but one of them was location. One of the best ways to explain it is Burger King has always found outlets where there is a large concentration of people but that wasn’t there only strategy because they also had the great idea of going head-to-head with McDonald across the street.

By setting outlets in front or near a McDonald outlet they were guaranteeing visibility of their franchise. McDonald can come up with new marketing ploys and new food but it couldn’t have the advantage of location like Burger King. Remember both of them are fast food franchises so for the common customer the closest franchise is enough. In most cases people who have ate at McDonald’s have tried Burger King and people who ate at Burger King have tried McDonald and that’s completely normal. At the end of the day there isn’t much difference except for the name of every meal. If you look at it both franchises have the same types of combo which includes a hamburger, fries and a soft drink. The process may vary a little bit but in general you’ll be eating the same thing at both outlets.

I. Product
The first p is product. Which is one of the important things to remember when offering menu items to possible customers is that there is a huge amount of preference available to those potential customers with regard to how and where they spend their money. Marketing constantly monitors the customers’ preferences. In order to meet these changes, McDonald’s has created many new products and removed old ones over time, and they will continue to do that depending on what the customers’ needs are. 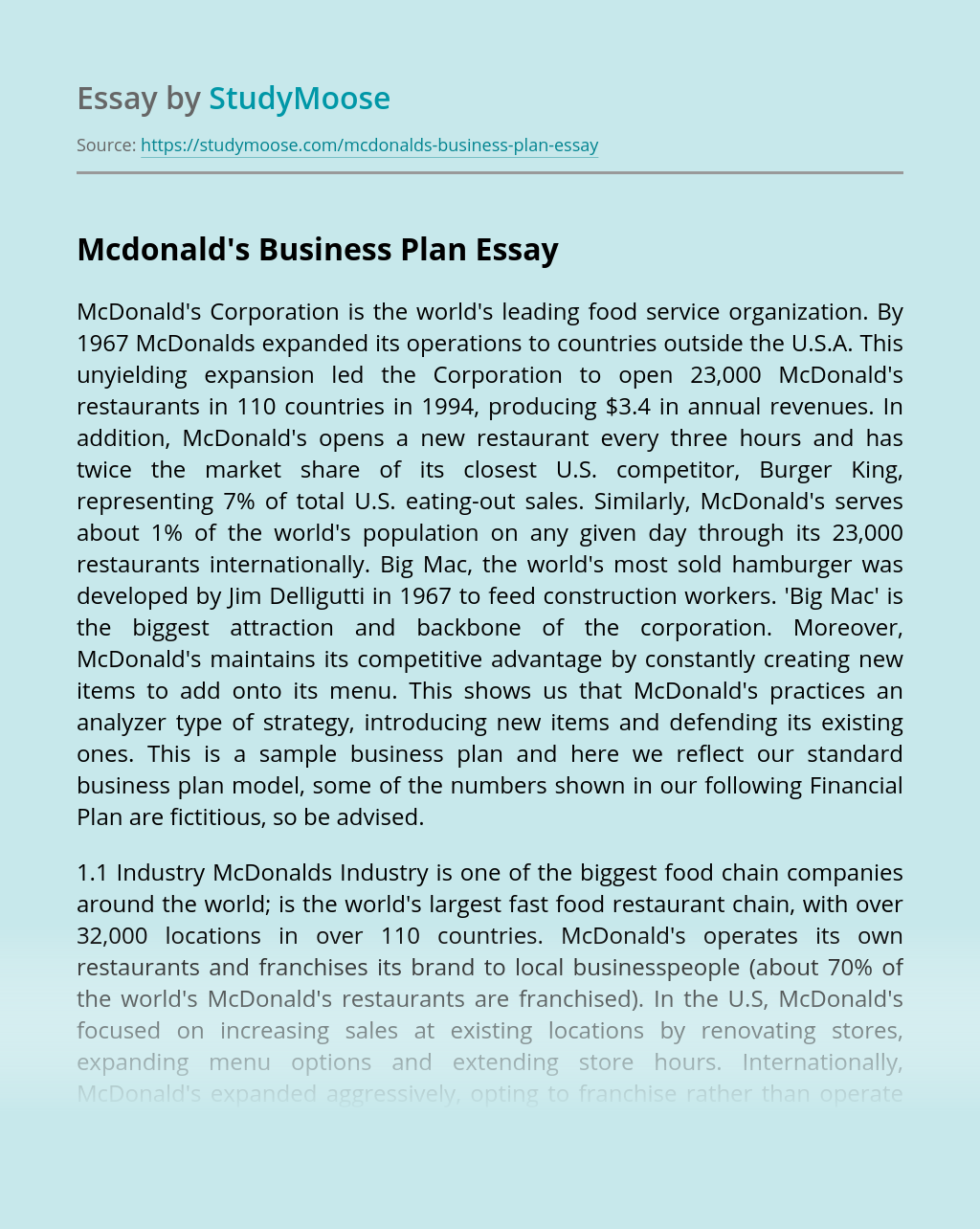 Turn in your highest-quality paper
Get a qualified writer to help you with
“ Mcdonald’s Business Plan ”
Get high-quality paper
Helping students since 2015
Stay Safe, Stay Original