Most people’s first thought of the West is romantic and ideal for a love story. The hundreds of shows and movies starring in the Wear show cowboys essentially saving the day from the villains of the town and saving the women he loves.This context is an attempt to remove the real background of the West, to remove the romantic and heroic atmosphere from a past of violence. but in this story thats not the reality, In McCarthy’s novel, “All the Pretty Horses” he establishes the place in between realism and romanticism along with other important literary elements such as setting, tone, and point of view.

Don't use plagiarized sources. Get your custom essay on
“ Mccarthy’s Novel All Beautiful Horses ”
Get custom paper
NEW! smart matching with writer

To begin, “All the Pretty Horses” time period is placed in the late 1940s to early 1950’s. The era of cowboys and the Wild Wild West. This novel has two rather than having the typical one placed setting. The two main settings are in Texas and Mexico and contrast one another. The significance of the settings contrasting is Texas represents realism for John and Mexico represents the romanticism and life that the John is wanting but soon finds out that it isnt his reality.

Proficient in: All the Pretty Horses

But he sets off for Mexico wanting this lifestyle. The setting is described as bare and as flat pieces of land with no vegetation or life. The descriptive language of the setting throughout the novel creates a unwelcoming and cold feeling for the reader. For example the description of the ranch in Texas that he lived all his life:

“It was dark outside and cold and no wind.

[…] Dark and cold and no wind and a thin gray reef beginning along the eastern rim of the world.’

Here, it gives a cold and also creepy feel for the readers almost as if the ranch had been abandoned. On top of that the sentence length is short which in just a few descriptive words, the author did a great job on creating that affect. Also, the lack of nearby life here is common throughout the novel, and is also described while on his journey through Mexico. The descriptive language from the narrator will linger over mostly the land.

Next, The tone of All The Pretty Horses is emotionless, not expressive, or the most cheerful. The tone is presented by John Grady Cole. Throughout the novel when John Grady talks there is no punctuation such as question marks or exclamation points. Almost as if he was monotoned. I believe the author presents the tone in this way, for readers to have a clear imagery of how bare and unexpressed John also exactly like how the setting and land is described which I believe is not a coincidence.

Also, Knowing what point of view in the story is important and can be critical when wanting to know if the narrator is creditable or not and overal whos side of the story is in view. In this novel, the point of view is third person (objective)The narrator in “All the Pretty Horses” tries to be anonymous and does not want their identity to be reached by readers. The narrator will be telling the story and suddenly throw a curve ball. The narrator describes the landscape in the most detail rather than the story itself. It seems as if he or she is preoccupied while telling the story. But occasionally the narrator does expand out beyond both the characters’ actions and even their thoughts. For example, when John gets a ride out of Saltillo, he comes across some people in the truck and they ask him it he is off to see his girlfriend. When John tells them he is, the narrator began describing the scene unfold, reaching into the future “Ah, they said. Qué bueno. And after and for a long time to come he’d have reason to evoke the recollection of those smiles and to reflect upon the good will which provoked them for it had power to protect and to confer honor and to strengthen resolve and it had power to heal men and to bring them to safety long after all other resources were exhausted. “

At the ending of the novel, John gets on his horse and rides off into a sunset that is instead heavily suggestive of violence, thick with the color red:

“The desert he rode was red and red the dust he raised […]. In the evening a wind came up and reddened all the sky before him. There were few cattle in that country because it was barren country indeed yet he came at evening upon a solitary bull rolling in the dust against the bloodred sunset like an animal in sacrificial torment. The bloodred dust blew down out of the sun.” Holy cow, the sense of imagery throughout the paragraph has me stunned and the description is beautifully written. The narrator wrapped up the story with this passage.

Literary elements can defiantly make a book come to life and keep a readers attention fulfilled. Mccarthy’s use of literary elements like the Setting, Tone, and Point of view make up the story. 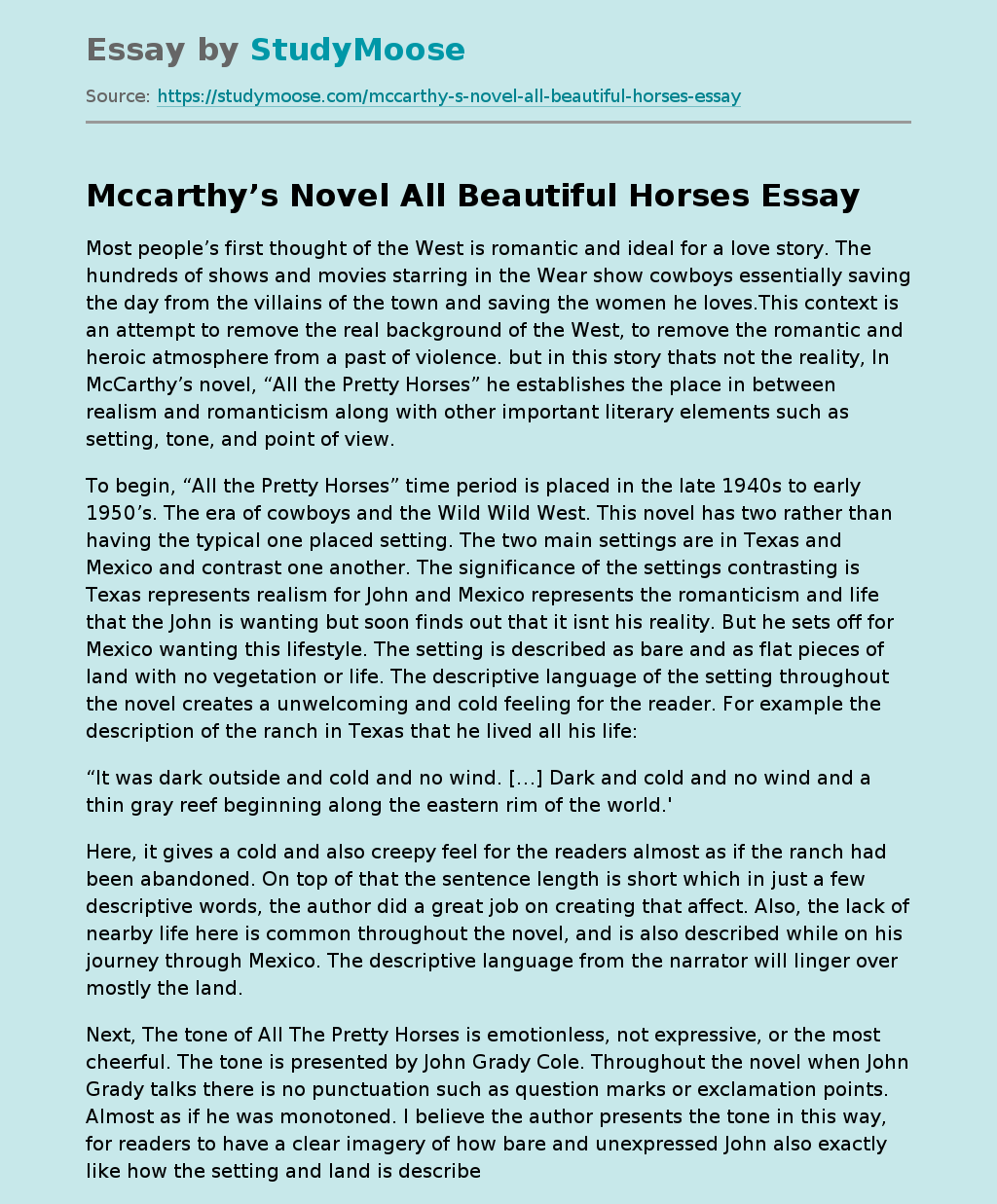