Maturity in "To Kill a Mockingbird" by Harper Lee

There are lots of marks that show one’s maturity. But maturity takes time, just like bread being ovened. Nonetheless, the bread has to sit for a consecutive hour, rather than in four breaks of 15 minutes intervals. Relating this to people means one needs to constantly be exposed to events that mature them. If the bread, like people, are exposed unsteadily and in odd breaks, they will not mature. Maturity In the novel, To Kill a Mockingbird by Harper Lee, has characters exposed to this heat throughout the novel.

Don't use plagiarized sources. Get your custom essay on
“ Maturity in “To Kill a Mockingbird” by Harper Lee ”
Get custom paper
NEW! smart matching with writer

Characters, despite being children, growing into more mature minds than some adults showcased through Scout\’s perspective. Maturity is clearly shown, at different paces, through Jem, Scout, and Dill.

Firstly, Jem matures from witnessing the Tom Robinson trial, he learns about how unfair life is to people born different. Chapter 13, Jem states, “I think I’m beginning to understand why Boo Radley’s stayed shut up . . . it’s because he wants to stay inside.

”(Lee, FIND PAGE NUMBER). In the beginning, Jem would spend his time with Dill, planning on ways to interact with Arthur “Boo” Radley because they did not understand his character. However, after witnessing the unfairness of the Tom Robinson trial, Jem understands why Boo Radley’s reclusive way of living. This shows Jem\’s mind grasping the concepts of people who are different and are treated differently. Lastly, Jem begins to make decisions he believes are right, even if they are unpopular. \”Atticus,\” his voice was distant, \”can you come here a minute, sir(Lee, FInd page number)?” When Dill sneaks out and meets Scout and Jem, Jem makes a grown up decision of involving Atticus in the situation.

Jem did this without apologizing even after Scout and Dill separated themself from him for a while. Apologizing would be Jem saying he was wrong and he shouldn’t have done it. Jem betrays Scout and Dill not to get them in trouble, but only to help them. This shows Jem is maturing because he made a decision that he thought was right and did not get influenced by peer pressure.

Finally, Scout absorbs the lesson of killing a mockingbird when Atticus has to bend the law for Boo Radley. “‘Yes sir, I understand,” I reassured him.”Mr. Tate was right. ”Atticus disengaged himself and looked at me. “What do you mean?”

“Well, itd sort of be like shootin’ a mockingbird wouldn’t it (Lee, 370)?’’’ Atticus is frightened that his children, after witnessing an unjust trial, will not respect him for moving around the law for Boo Radley because of his connections with the sheriff. However, Scout understands why Atticus should do this, and references Boo Radley to being a mockingbird. This means Scout absorbed the lesson of “killing a mockingbird”. Scout understands to not bend the law means Boo would be getting unwanted attention from the town. Thus, a reclusive man like Boo receiving so much attention would be like shootin a mockingbird.

Nextly, Scout’s whole perception of Boo Radley changes throughout the novel, making her understanding grow, ultimately maturing her. “‘His lips parted into a timid smile, and our neighbour’s images blurred with my tears. “Hey, Boo,” I said”(Find page number). In the beginning, Scout , Jem and Dill would spend a lot of time on games centering around Boo. These games were possible because Jem, Sout and Dill did not understand his character. Gradually the reader’s image of Boo changes. But to Scout, it changes drastically all at once. This happens when Scout comes face to face with Boo and bursts into tears. These tears are metaphorically all the nonsense she thought about Boo Radley leaving her. She sees Boo for the first time as her neighbour. Scout grows from this because Boo wasn’t like anything she thought he was. Through this, Scout understands to not judge people by gossip, but their actions.

Maturity in "To Kill a Mockingbird" by Harper Lee. (2020, Sep 07). Retrieved from https://studymoose.com/maturity-in-to-kill-a-mockingbird-by-harper-lee-essay?post 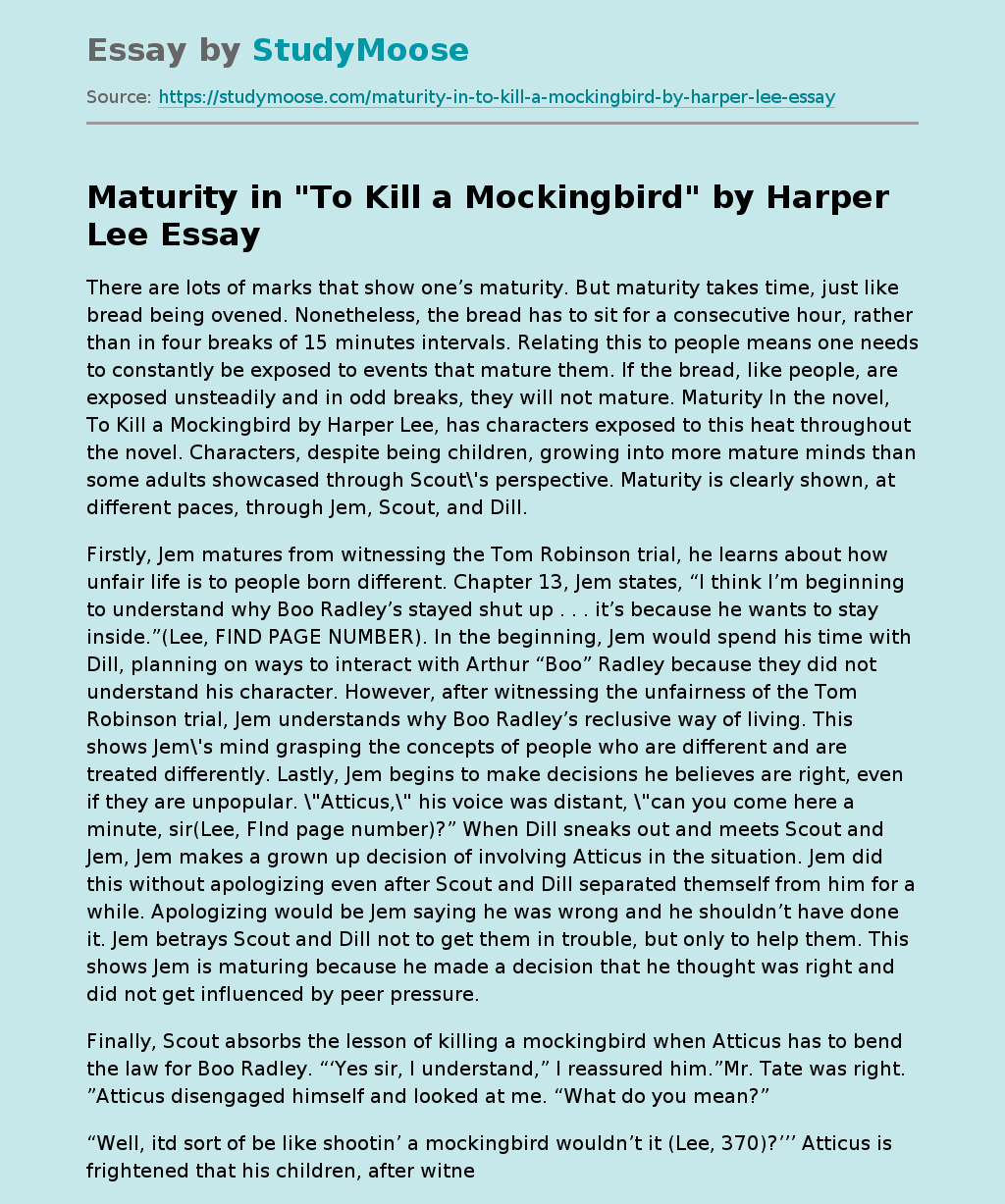