This case talks focuses on the event in the year of 2007 when Mattel – the leading global toymaker – voluntarily recalled its toys from worldwide stores. Mattel’s name is synonymous worldwide for its most famous product – the Barbie Doll. The recall was initially for 83 toys which had excessive lead paint and soon after 6 more products we recalled which had a design problem of small magnets coming off the toys in addition to the use of lead paints. The lead that was used could potentially be toxic for children and the magnetic parts that could come off the toys could potentially be fatal for the digestive systems of children if ingested.

All the toys recalled were manufactured in China and in total more than 1.5 million toys were called back. The initial diagnosis was that the main cause of the problem was “Made in China” however the case explores that the root causes for the default were defective designs.

* China had become the leading manufacturer of toys by 2000 * 80 % of toys coming to US were manufactured in China
* 65% of Mattel toys were produced in China
* Most Chinese toys were made in about 5000 factories located in Guangdon province in China.

These factories were majorly owned by Hong Kong

Mattel’s product fell into two broad buckets. First was the core products like Barbie dolls which sold through longer periods and the second bucket comprised of the non-core products which comprised of seasonal toys like movie characters. By 2007, more than half of the revenues for Mattel came from core products that were manufactured in Mattel – owned plants in china.

The remaining products which were procured from local Chinese licensed vendors. Mattel had an inspection program in place for its products. Off the 5000 products that it used to develop each year, it would randomly check products by taking them off the production line.

In order to supply paint to Mattel’s supply chain a vendor had to be a certified one. The complication with this arrangement was that on many occasions Mattel’s direct vendors contracted down to other suppliers who in turn contracted to other suppliers and thus the origin of certain products were difficult to trace – for example the lead paint. Even though Mattel had not allowed its vendors to sub contract to other vendors without its permission, it was not sure how well Mattel’s suppliers were adhering to this. Ironically, 200 of Mattel quality and vendor assurance employees were located far away from the production facilities in Hong Kong. As a good HR practice Mattel had hired a professor with international reputation for being a critic of worker treatment to report independently of any malpractices in Mattel. Reasons leading to the event

Most toy sales were coming from big box stores like Walmart, Target etc. The business model of these big retailers revolves around extreme cost pressures. This led to a lot of bargaining with Chinese manufacturers to cut down their costs. At the similar time, the Yuan had appreciated and increasing costs of raw materials (such as fuel costs) left little room for Chinese manufactures to invest in significantly progressive quality programs.

Lead in paint was a frequently occurring problem for toy manufacturers. Even though Chinese manufacturers had put processes in place that had checks to avoid having lead in the paints, it was increasingly difficult to monitor the quality of paints

In 2007 many toy products had small magnetic parts attached to them which could potentially get detached from the toys and then they could be accidently be ingested by the children. These magnets, once inside the digestive system were toxic and could potentially stick together and harm the intestines. Another design problem was that some of the toys were susceptible to being broken. Most of the designs were made outside China and thus this was not a manufacturing problem.

Some recalls of Mattel’s products were because of the potential misuse by children. There were choking or strangling hazards associated with some of the products that made the products dangerous.

The expected impact of Mattel’s recalls was to the tune of $30 million dollars which was about half of the operating income of that quarter. The media coverage and global attention aggravated the issue. In order to deal with this Mattel’s response was as follows.

As the first point check – for the lead paint every batch of paint could only be acquired from certified vendors. Second, the controls for vendors and contractors were made more stricter and random checks were constituted. Thirdly, the finished products would be subjected to final checks before they reach the customers

The company followed a proactive communication strategy to address the issue.

The consumers reacted strongly to Mattel’s response. The case elaborates how systemic failures can almost cripple a global leader. Most importantly, the ‘made in china’ brand lost significant reputation because of this episode. However, better measures and corporate controls resulted from this event and they eventually transformed the manufacturing world for the better. 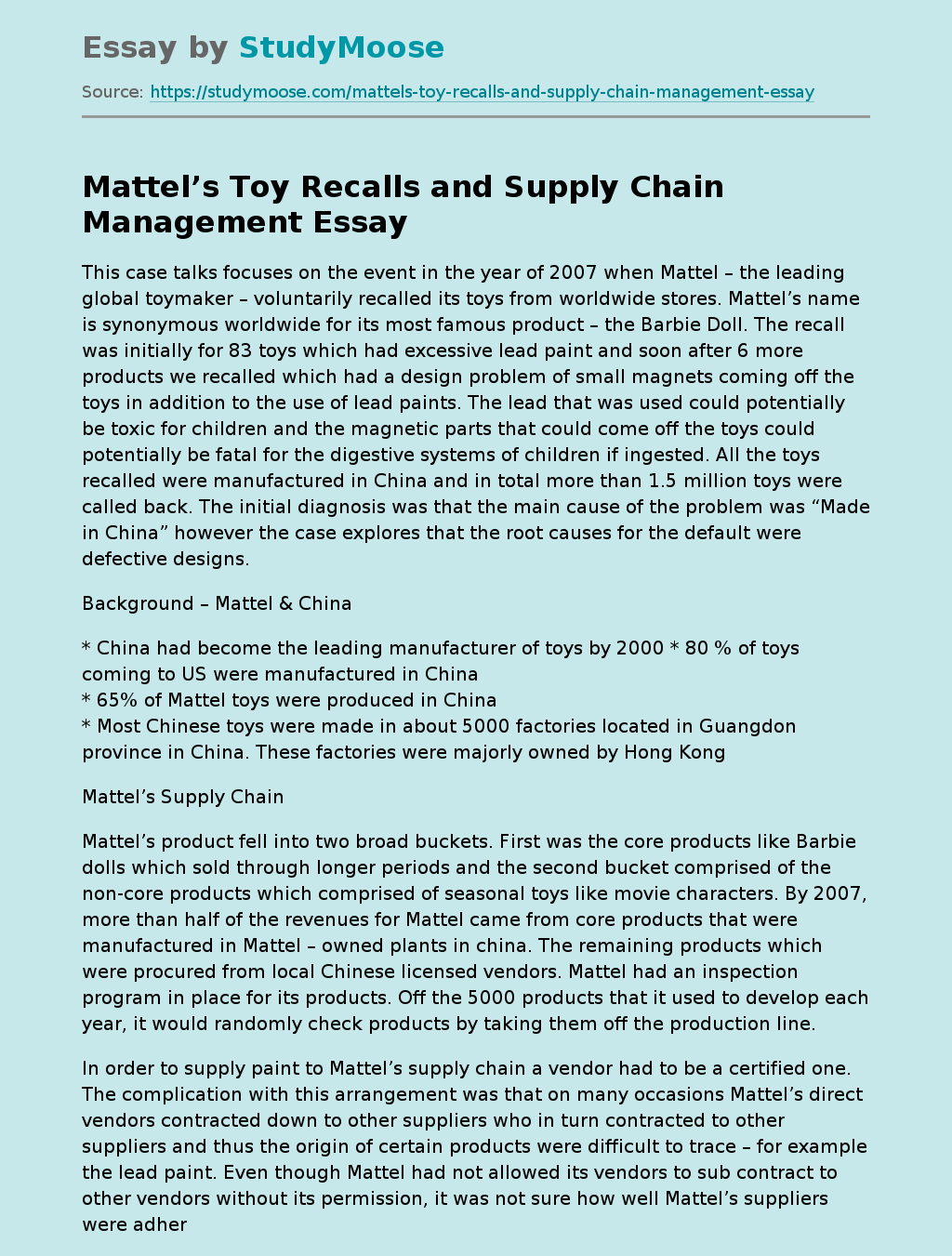