Mathew Restall’s Seven Myths of the Spanish Conquest is a well-written book that serves an important purpose. That purpose being: the debunking of generally accepted falsehoods about the Spanish Conquest beginning in the 15th century. Restall’s book is separated into seven chapters that specifically address general myths most historians and students perceive as basic — universal truths. Restall uses the term “myth” to describe the inaccurate/fictitious depiction of history “commonly taken to be true, partially or absolutely.” These “myths” are the progenitors of unintentionally self-centered perceptions of events historically recorded in subjectivity.

Don't use plagiarized sources. Get your custom essay on
“ Mathew Restall’s Seven Myths of the Spanish Conquest ”
Get custom paper
NEW! smart matching with writer

The Self-absorption, relating to the over exaggeration and mystification of the Spanish Conquest, germinated over time. Excitements about the “New World” took Spain by storm and subsequently lead to a heterogeneity of mythical depictions.

The chapters of the book discuss seven myths; the myth of exceptional men, the king’s army, the white conquistador, completion, (mis) communication, native desolation, and superiority. Too much credit is given to the men who were apart of the conquest.

These men are credited for innovating a unique skill set that allowed them to conquer the natives when in reality, they were merely utilizing strategies and techniques the Spaniards had been using for years in their conflicts in North Africa and other regions. Restall relied heavily on the writings of the conquistadors and natives to determine the truth behind all of the myth and folklore. A common myth is that the conquistadors were sent directly by the king of Spain to conquer the Americas as soldiers but Restall proves this myth to be incorrect based off of the writings of the conquistadors themselves.

These men had a variety of “identities, occupations, and motivations—and were far more interesting than that.”

Another common misconception speaks of the exclusivity and efficiency as to which the conquest was achieved. The myth is that the conquistadors conquered the America’s relatively quickly in a sovereign effort but Restall explains that the Spaniards had a lot of help from the Natives and African’s
and the “completion” of conquest was anything but; as mass portions of the land remained unscathed by the conquest. Restall effortlessly explains how the conquistador myths of superior communication between the Spaniards and Natives were just as fabricated as the modern misconception of inferior communication by historians.

The communication between the two, or lack thereof, fell somewhere between both myths. Restall uses his concise writing style to explain the resilience of the Natives, debunking the myth of Native desolation and how the myth of superiority derives from Eurocentric beliefs of racial dominance which lead to racist ideologies that “underpinned colonial expansion from the late fifteenth to early twentieth centuries.”

Restall’s work in this book administers a revitalizing dose of truth to historic and modern misconceptions of the Spanish Conquest. The book is not very long but it is written in an entertaining prose that fluidly transitions between concepts. The arguments are solid and detailed making it almost too easy to follow. Restall’s research seemingly taunts historic perspective and makes you question how you could have ever believed the contrary. His clear and concise depiction of events paint an obvious picture of subjectivity on the part of the conquistadors and embellishment on the part of historians.

The book challenges all major explanations of the Spanish Conquest and blames them on Eurocentric ideologies that boast racial superiority. It was this racist misconception that lead to an embellishment of circumstances over time. Historians rewrote history in a way that made them look far more superior then that of the Natives but Restall lays those misconceptions to rest. The book focuses on the big ideas that are – and have been – generally accepted as common knowledge, which is a much larger task than tackling ambiguous points that could be argued either way. Although this book isn’t very long, it is a very ambitious and bold correction of facile arguments that have stood the test of time.

Restall’s critique and correction of the Spanish Conquest should be read on all levels of education. High school students should read this book as they begin to establish a basic level of understanding of these historical events. College students can use this text to challenge their established beliefs and grow their knowledge of the subject matter by gaining a new and exciting perspective. Teachers and professors can gain to learn more about the subject so that they may foster engaging debates and discussion in class on the course material. While this book challenges the accuracy or lack-thereof, of a specific historical event, it subsequently forces us as student, teachers and historians to view all events in history with a healthy sense of skepticism.

Restall’s attempt to debunk common misconceptions or “myths” was very successful. Overall, his arguments were crisp, concise and convincing. The writing style of Restell made for an especially easy read that was as entertaining as it was informational. The ease at which he navigates through the subject matter makes you question your understanding of all major historical events. Not only should students on all levels who are interested in the subject be required to read this text but their teachers and professors as well. It’s important that teachers and professors make themselves familiar with the historical inaccuracies of this subject so that they won’t make the same mistakes and continue to proliferate the mis-education of the Spanish Conquest. 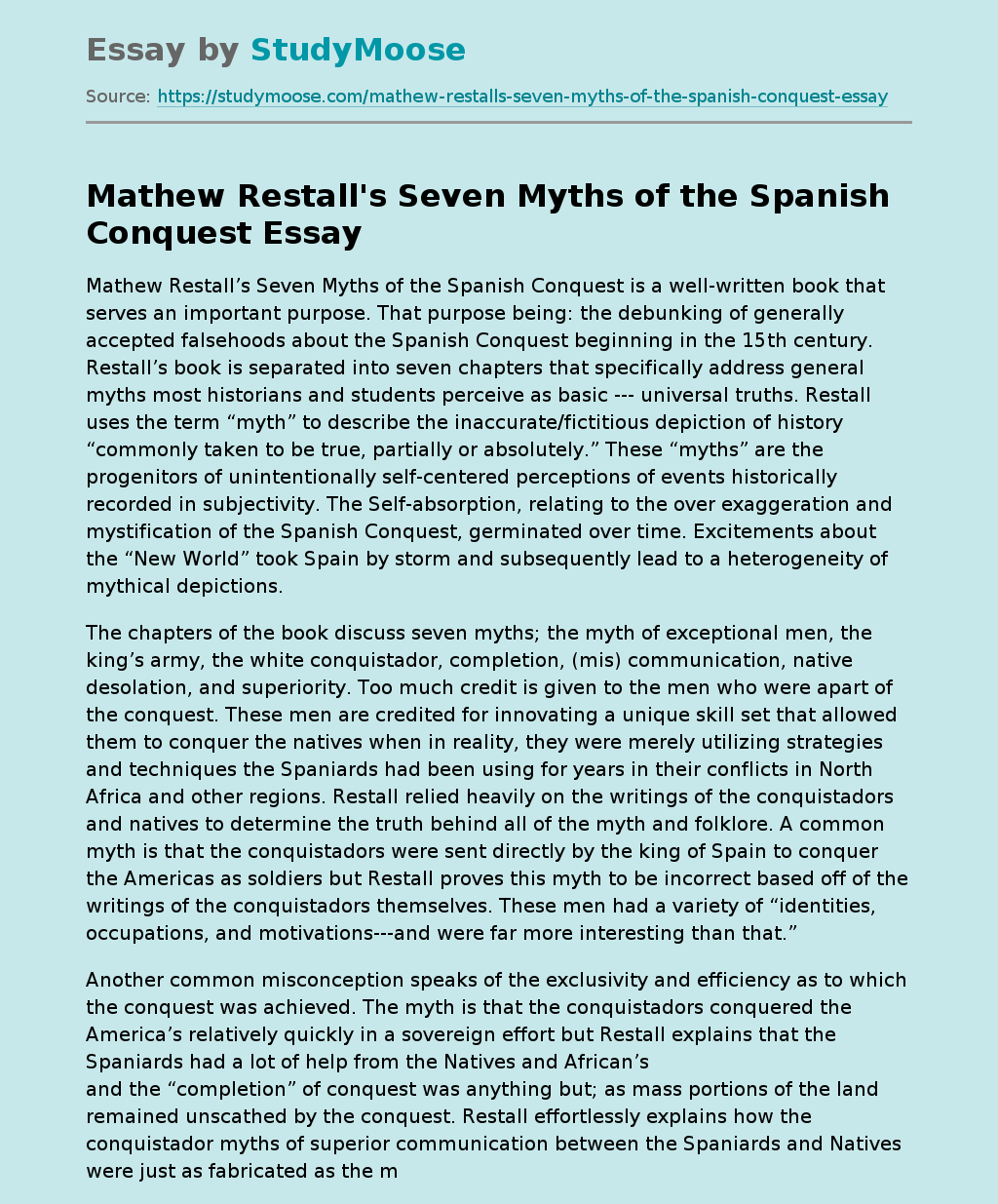