"Master and Commander" about organizational behavior

In the first part of the paper, I would elaborate the point of leadership in this movie. In terms of this, the captain has the power to influence the seamen. As the British crew pursued its opponent, the captain and his team were searching for a calculated strategy that would allow them to defeat the French captain and take the ship as a prize.

Don’t waste time
Get a verified writer to help you with “Master and Commander” about organizational behavior
Hire verified writer
$35.80 for a 2-page paper

As it turns out, their strategy was its greatest strength. By applying their knowledge about warfare they were constantly learning about the changing environment, such as the new technology used by the French ship. The British naval officers were able to create an emergent strategy. The captain used the Fiedler leadership model, which matches the leadership style of interacting with the seaman and the degree to which the situation controls and influences the leader.

For example, when the captain orders the seamen to fight again the battle, he gives orders to those who are responsible for doing the work.

All seamen coordinate together with the captain and follow all the orders of the captain. One proactive aspect of the story was the ability of the captain to embrace knowledge from other disciplines and accordingly act on it. The captain’s friend, who was a doctor, was an accomplished naturalist.

And his ideology was that insects disguise themselves well according to the situation around them. Naturally, the captain uses this knowledge to fool the French ship by using potential alternative. Master and Commander are sure to provide lessons in leadership and the captain’s character demonstrated many attributes of quality business leadership. For example, when the seamen place their trust on the captain, they are willing to be vulnerable to his action. In addition with the leadership concept, they learnt how to follow the captain’s instructions, knowing when to engage in the battle, inspiration to pursue achievable stretch goals, the delicate balancing of compassion and leadership of others in the ship, and proper leadership development, mentorship and succession planning.

The captain did not follow the rules of leader participation model as he was the sole person in the decision making process. For example, when he decides to fight against the French ship, his other co-members who had high authority did not agree but he still decided to fight the war. In organizational behavior terms, leadership plays a central part in understanding group behavior. In this movie, the captain shows accurate capability of improving the seamen’s performances. Other concepts used in the movie would be initiating structure, where the captain attempts to organize the battle strategy in order to fight against the French ship and attain their goals. Moreover in the movie some of them did not agree to fight the French ship because it was more sophisticated in terms of technology, but they trusted the captain’s decision.

The seamen practice leader member relation concept, where they trust and respect their captain. As mention above, the captain portrays good leadership skills in his approach to manage the ship. Therefore, this would contribute directly in gaining competitive advantage. The seamen would perform better to win the battle and attain the goal of the captain. In terms of organizational behavior, the company would be more productive and the employees would feel satisfied and contented to work under the organization because of the leadership style portrayed by the top management.

The other concept observed in the movie is motivation. The captain’s higher authority informed him that his mission should be to destroy the French ship, which till date has not been executed. The captain notices that this will not be an easy task as their ship was damaged from earlier warships. From this point on he becomes obsessed with completing the mission. His main motivation was to stop the ship at any cost and to execute this he drags the crew of ship to attain the obsession. This became his main goal in life. His sole aim now was to stop this ship. Even though he knew that the French ship was larger than his ship, he was still motivated to continue the battle.

Apart from that, the captain also portrays management by objective concept in this movie, where he has a specific goal to attain. For example, everyone’s goal in the ship was to fight the French ship and win the battle. Moreover, the captain provides motivation for the seaman in the ship. When one of his lieutenants was looking through the telescope, he noticed two ships approaching but when the captain went to confirm it, he did not see them. The lieutenant would have got discouraged if he had revealed the truth but he went ahead and complimented him for doing a good job. In the other part of the movie, two of his seaman presents to him the model of the French ship which gives him an idea why the French ship is superior to them. For the job done, he treats the seamen with wine.

This is an ideal way of motivating the seaman to perform better in future. Before the war the captain encourages his seaman with his inspirational quote “discipline will count as much as courage” and “this ship is our home, this is England”. This inspires and motivates the seaman to combat the French ship. This provides a competitive advantage over and above the other tasks. The captains approach results in complete satisfaction and contentment, which enables the seamen to perform better in the war. Moreover, he motivates the seaman during practice for war and he constantly motivates the seaman throughout the movie. In organizational behavior terms, this increases the productivity of the company and enhances employee performance.

The movie shows the effects of power. The captain has legitimate power because he has the formal authority to control, to order and to use resources available on the ship. For example, when the captain orders his seamen, all of them agree and act accordingly to his command. The captain has charismatic power which is really an extension of referent power steaming from his individual personality and interpersonal style. For example, the doctor said that he completely trust’s the captain for his capabilities. Moreover, the entire seaman respects him for his decision and as a charismatic person.

The captain once mentioned to his lieutenant that he should not make friends with the seaman but should gain respect from them as he is at an authorative level. This would also make things easier for the captain in command to gain a competitive advantage over the others. Since the captain is the most powerful person on the ship, all seamen would have to follow his command and act according to his needs. In term of organizational behavior, if you want a thing to be done in an organization, power does have an upper hand. Using power in an organization may upset some employees, but this is the one of the ways to attain respect and to give order to the employee.

Conflict can be considered as a part of the movie. The first conflict arises when the captain plans to fight the French ship. During the meeting, the other high authority person in the ship goes against his idea because they feel it is impossible to win against the French ship as it was better equipped than their ship. Conflict arises at this point of time but the captain remains with his plan to fight the French ship. Another conflict in this movie is when the doctor on board asks him to stop at an island because he wanted to see the natural beauty of nature as promised by the captain but he does not agree.

The reason being he wanted to continue his journey and stop the French ship. But ultimately both of them land up arguing about the topic. This can be related as task conflict because their goals did not match. In organizational behavior, conflict should be managed in order to gain competitive advantage. Apart from that, managing conflict in work environment is essential. When an employee is satisfied and the work environment is conducive, it would increase the company’s productivity and he or she will have better relationship with other employees in the organization.

Even though some of his fellow people do not agree with him in the earlier part of the movie to fight but later they all supported him and worked together to reach the common goal. In term of organizational behavior, decision making process can be considered as the most important concept. This is because without a proper decision a company will not attain competitive advantage and this will not benefit the company in any ways which will hamper their productivity.

“……any organization has to have a sense of where it is going, along with someone to help get it there. Like a ship at sea, all the technology in the world is useless without a firm hand on the tiller and a captain who has a good sense of direction” (Balancing on a Wire, 1998, p.39). This statement means that the captain should have foresight to manage and control activities towards achieving their goal. In conclusion the captain was in a win-win situation. His primary goal was to defeat his opponents and gain complete control and power over them.

"Master and Commander" about organizational behavior. (2016, Jul 31). Retrieved from http://studymoose.com/master-and-commander-about-organizational-behavior-essay 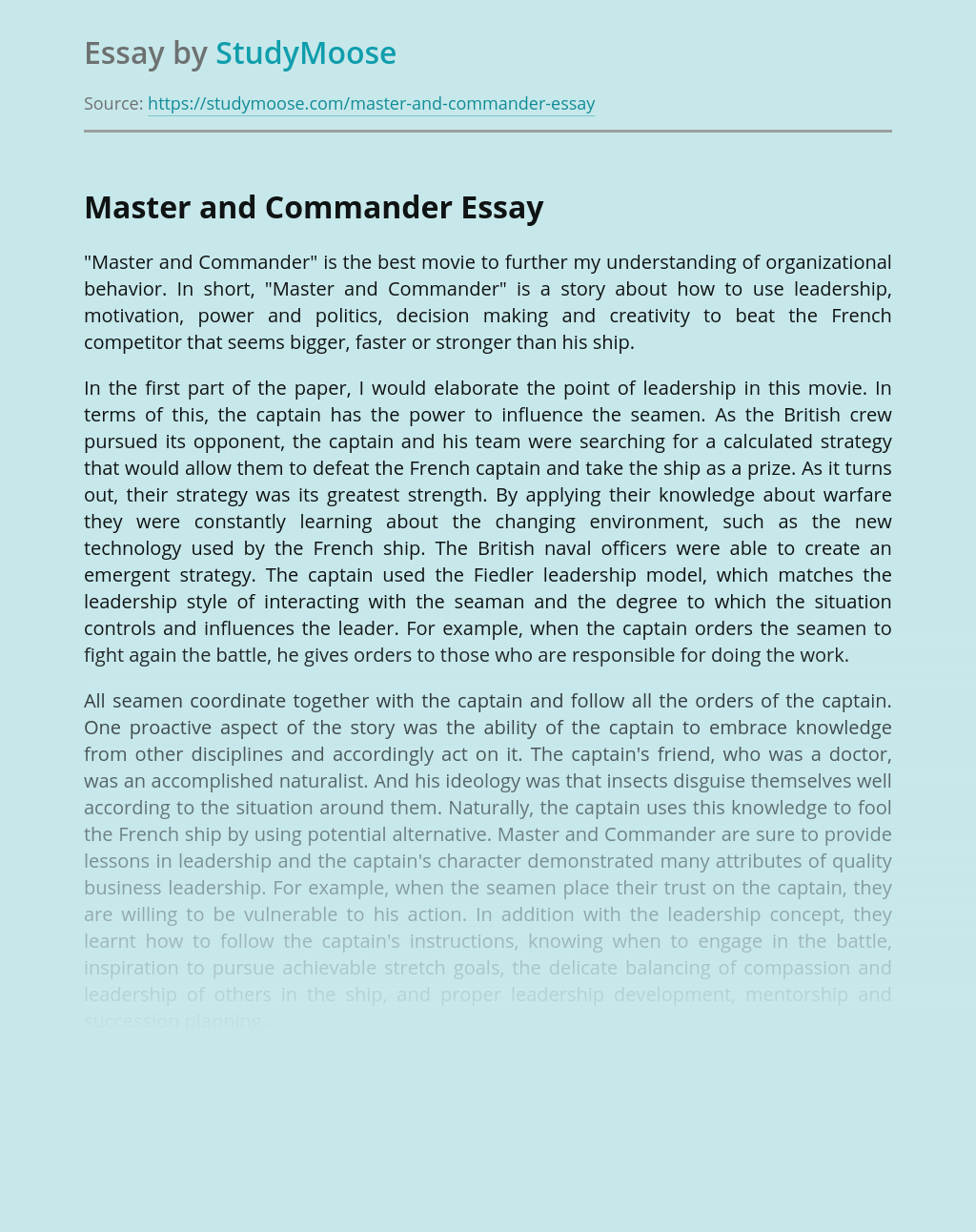 Don’t waste time
Get a verified writer to help you with “Master and Commander” about organizational behavior
Hire verified writer
$35.80 for a 2-page paper
Stay Safe, Stay Original