Massey Ferguson Limited an International producer of Farm machinery and diesel engine started its operations way back in 1847 and by the end of 19th century they had operations throughout 31 countries of the world. In 1978 Company had financial loss of US. $262.2 million .

History shows that Massey had been strong in Market outside North America and Western Europe. Massey Production facilities were also across the different region of the world (Exhibit 5). Largest facilities were located in Canada, France, England, and Australia. In less developed countries like Pakistan, Peru, Egypt, Iran, Libya, Turkey, Saudi Arabia, Sri Lanka, Sudan and Mozambique Massey was quite successful in carrying out the contracts and operations.

It is quite obvious as Massey got $360 million contract to update Peru’s tractor and diesel engine industry.

In 1980 Massey purchased diesel engines from Perkins Engine Group which was the producer of diesel engines in England. 50% of Perkins’s diesel engine export worldwide was to Massey’s subsidiaries and affiliates. Because of rising gasoline prices there was huge shift to diesel engines, so it was bringing in an effective market to Massey as well

During 1960’s and 70’s Massey was aggressively involved in expanding its operations and building up new assets which was majorly financed by Debts that of short term nature .By 1978 Massey’s Debt/Equity ratio= 214% (Exhibit 4) Same year Massey lost US. $ 262.2 million, management associated this loss to following reasons:

Imposition of Monetary policies and credit restrictions in Argentina and Brazil, which ultimately causes sales to decline. Decline in North American natives’ income and higher prices of products.

Beside this loss company laid off their employees from 68,000 to 47,000, reduced inventories from US $.1083.2 to US $.988.9 million, 24 plants were closed. Despite all these moves there were continuous losses all around the world especially on operations that was approx US $35.4 million or US $.2.38/share. At the end of first 3 quarters of 1980 company had unfavorable loss of US $ 62 million including currency adjustments of U.S $ 37 million.

Named: Deere & co and International harvesters. Massey was traditionally ranked 3 rd in sales of farm equipment behind Deere & Co and International Harvesters. However in 80’s Massey occupied 2nd position in market for small tractors and combine harvesters. In contrast with its competitors, Massey Ferguson chose to finance its expansionary agenda primarily through debt offerings and short term credit lines. This type of structuring had very detrimental implications for Massey Ferguson. The use of so much leverage would increase the risk of the projects they were undertaking beyond the industry standard. Firms in the same industry such as Deere and International Harvester throughout the 1976-1980 period maintained debt/capital and STD/capital percentages consistently lower than Massey Ferguson (a trend that exacerbated as time went on).

These types of restrictions can impede company financial options during down times (as they did when Massey Ferguson attempted an equity issuance in 1978). The emphasis on short term credit lines was also a questionable choice of finance structuring. Expansionary/market penetrating strategies typically pan out by taking losses in the short term in order to realize larger gains in the long term. Along with an expansionary strategy, Massey Ferguson was also increasing spending in R&D for production of higher horsepower tractors to market in North America and for diesel engine production.

High interest rates after the 1973 oil crisis and the 1979 energy crisis, the US economy was affected by stagflation. In an effort to fight excessive inflation, the Fed adopted a tight monetary policy, raising interest rates (as an illustration, the federal funds rate increased from 11% in 1979 to 20% by June 1981).This affected all players as it led to a plunge of stock market prices, on the one hand, and an economic recession, on the other. Furthermore, Massey was particularly hit hard: since it mainly financed its operations with short-term debt, its financing cost went up dramatically.

The above-mentioned monetary policy pushed the American economy into recession. Massey’s renewed drive into North America (by 1978, it had introduced a new range of large, high-horsepower tractors and an improved baler line) unfortunately demand went down and MF had to suffer

High exchange rates were another area of concern which damaged the MF as the pound sterling rate was increasing. MF cost of goods sold also had a direct impact which ultimately cut the profit of the company and company lost its competitive edge.

Massey’s financing choices over the years brought with them many problems, which aggravated the already grim situation in the product markets. First, during its expansion in the1970’s, Massey levered itself immensely. Compared to its two main competitors, it systematically had the highest Total Debt/Capital ratio (in 1980: 80.85% compared to 53.56% for International Harvester and 40.28% for Deere & Company). While this might have been justified by the growth strategy, it turned out to be very damaging for the company in view of the current situation.

What was more unusual was the fact that it used short-term debt to finance its business operations, fixed asset capital maintenance, and long-term principal and interest repayments. As a result, Massey was much more affected by the increase in interest rates than that of its competitors where MF lost its edge. Cost of debt of MF in 1980 was 229.9 million $ compared to net income of 225.2 million $ that shows the real story.

The major alternatives available to MF are:

Under the current scenario, no company will be ready to merger with MF as:

Company’s shares worth was around $100 million but at the same times additional capital of $ 500 million was required to carry on operations which was not possible under the current circumstances.

Companies short term debts were about to mature which was another additional burden on the part of company. MF had 100 million $ of receivables in this recession era. Additional 100 million $ inventories were there in demand decreasing market scenario.

Another option that MF has, to cover up its loss by selling any of its unit but financial side of the company and Product-market position doesn’t make this option viable.

If MF goes for Liquidation option same situation remains that:
Stakeholders will not get anything out of it as already company’s financial value is very much down to $5 from 25$ $ 1 million receivables and inventories will not be going to pay at their full that is again loss for the stakeholders. Under the current financial circumstances MF value will further go down if liquidation option is to be considered.

The last considerable option to MF was refinancing the capital structure so as to bring in the balance between the equity and debt structure. But under the circumstances bringing in stocks will not be easy consideration as investors will not be ready to finance such project which is already close to be defaulted. So company can consider

Financial Advice :
Refinancing is an alternative that is best to be considered, our suggestion to MF are:
MF should convert their debts to equity on immediate basis as debt holders will not get anything if company gets default and by getting shares they will be the part of company’s board of directors as well. On immediate base they can request their stake holders to hold on for certain time frame. Company will pay them interest with betterment in finance positions. Sweeteners or warrants are other option they can offer to debt holders that will bring in something positive to opt for as MF has good chance to come up with finances. Government being the key stakeholder is ready to guarantee the new equity investment in Massey as if company closes its operations ultimately thousands of employees will be direct burden on the govt.

Learning From the Case Study

The major learning’s from the case study are:

Organizations should not aggressively opt for aggressing financing when they are dealing in highly cyclical market where risk is high or highly uncertain. Aggressive debts in good times are not a good financial strategy, organization should create a balance between capital structures and bring in equity financing when in good time. Interaction of product market and financial risk should be carefully considered while carrying on various long term strategies for the organization. 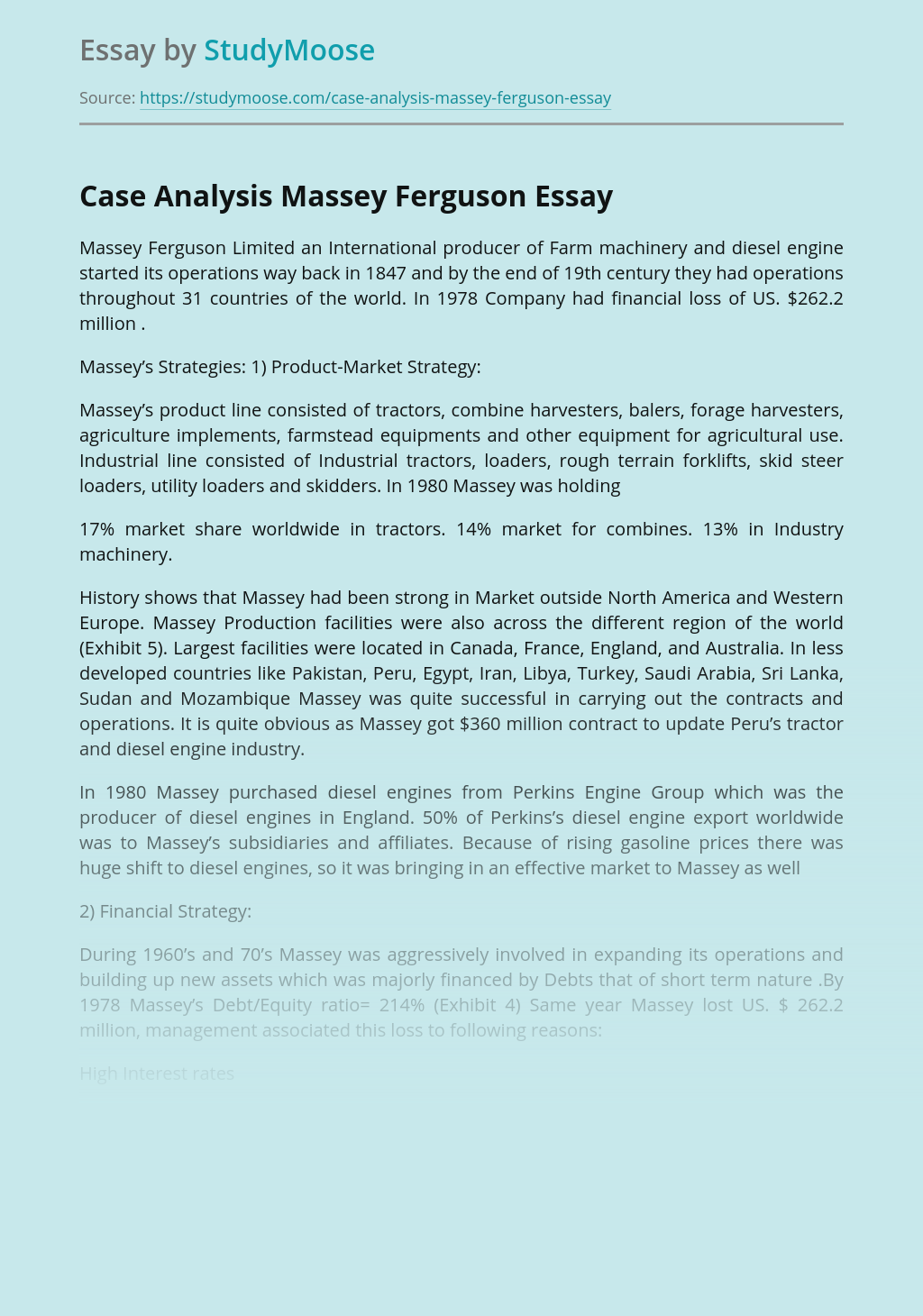 Economic Implcations for the Australian Economy

Rate this post (16.0 points) 1. Choose an example of a type of new company you could start, and then use this company idea to answer the questions below. You might choose a pet store, a restaurant, a tutoring business, or something else. This can be the same type of company you chose in assignment...

Rate this post Clearwater Seafood (Clearwater) is a seafood company located on the east coast of Canada, and Clearwater Seafood income Fund with operations around the world. As a result of the increasing importance of the Canadian dollar relative to other currencies of the world, Clearwater recently stopped paying their distributions. The decision faced by...

Rate this post 1. Choose an example of a type of new company you could start, and then use this company idea to answer the questions below. You might choose a pet store, a restaurant, a tutoring business, or something else. This can be the same type of company you chose in assignment 8 or...

Script of a Tour Guide

Rate this post Welcoming tourists: Hello everyone. My name is Luca. On behalf of Suntan Tours I’d like to welcome you all to Los Cabos. The bus ride to your hotel will take about fifteen minutes. Right now I’d like to take a minute to familiarize you with the area and discuss some brief safety...