1. The utilitarian approach seems to best describe Marv Heimlers turnaround strategy at Massengills. I think so because his decisions would result in the majority of employees keeping their jobs although a smaller amount would be laid off. This shows he is doing what’s best for the company and still seeks the interest of the greater number of people. To him, if he had not made the decisions he made, everyone would be out of a job. a) Individual approach was not applied

b) Moral approach was not applied: employees weren’t given reasons why they were being terminated and the way in which termination process was done was very harsh and inconsiderate.

Don't use plagiarized sources.
Get Your Custom Essay on Massengill’s Department Store Just from $13,9/Page

c) Justice approach was not applied, employees weren’t treated fair and equal. Example people with long years of services were treated the same as new workers .

2. I would place Heimler at the post conventional level of moral development because he implemented his plan for change knowing that there would be persons with different views.

He justified his actions by his personal beliefs and put the future of the company first. His actions showed that he was firm in his decisions, looked at the greater good of the company as a whole and and sets his own principles.

3. To avoid the problems he was facing, Marv Heimler could have met with employees and informed them about the state of the company and that layoffs were inevitable. This would have given the employees sufficient notice to seek out other jobs. 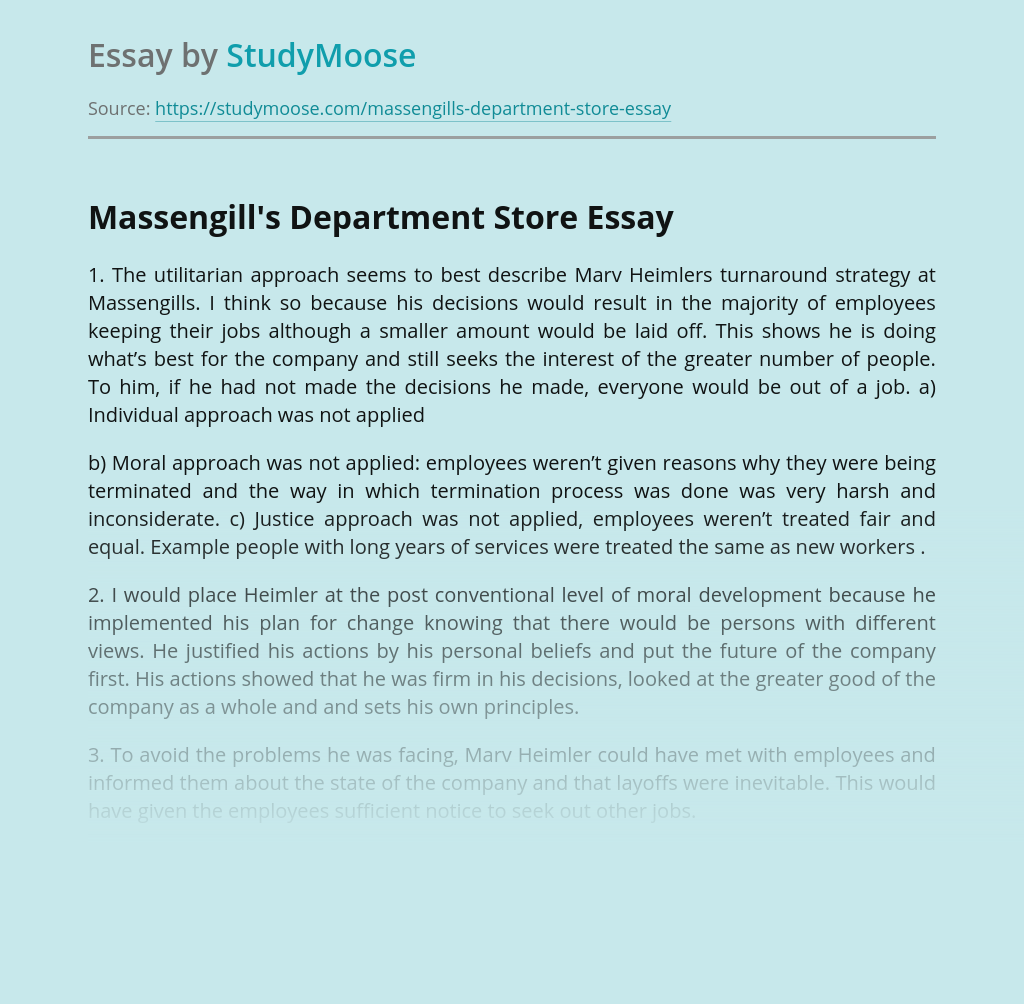 It is known how the cowboys won the West, as it is seen in so many films and TV shows that it seems impossible that anyone would not know about these tales. White civilized soldiers moving out of the East coast of the USA, having the wild natives and lands tamed. The wild natives who... VIEW ESSAY

View sample
Get Essay
"Dialogue with Trypho" by Justin Martyr

In his work “Dialogue with Trypho” Justin Martyr in a form of a dialogue presents the views quite contrary to what it is usually taught. A well-known idea of Jews being the chosen nation favored by God is rejected. Justin Martyr is trying to find logic underneath God’s wrath, and his line of argumentation, based... VIEW ESSAY

The history of violence in the world is well documented. However it is also possible to use non-violence to bring about change. This DBQ will look at two countries where a non-violent movement was successful. India and South Africa were two important nations on two different continents. But although they looked strong on the outside,... VIEW ESSAY