It shows his possessiveness more at the end of the chapter when the finishing words are “she was to be mine and mine only. ” This shows how actually possessive he is and how he really feels towards Elizabeth. He continues in chapter two about his relationships with his family and friends, he is also introduced, in this chapter, to electricity and galvanisms and starts to read scriptures and works by people such as Cornelius Agrippa, Albertus Magnus and Paracelsus, who he describes as the lords of his imagination.

Don't use plagiarized sources. Get your custom essay on
“ Infuence Of Mary Shelleys Life On Frankenstein Essay ”
Get custom paper
NEW! smart matching with writer

This tells us of his first interests in how the human brain works and that is worked using electricity. He gave up his former occupations and started reading more natural history. In chapter three, Victor’s mother dies of scarlet fever. Here is where we see that Victor is starting to think more deeply into creating a creature that will never suffer. He describes his feelings of despair and anger of his mother’s death.

He goes on to say, “when the lapse of time proves the reality of evil, then the actual bitterness of grief commences.

Yet, from whom has not that rude hand rent away some dear connections? And why should I describe a sorrow which all have felt, and must feel? The time at length arrives, when grief is rather an indulgence than a necessity;” this shows that his is finding grief more of an indulgence as time goes on, not a necessity as some people feel it is, this is showing us that he is trying to partially cut himself off from the world.

He then departs for Ingolstadt, the university that he will be studying at, thus so leaving a grieving father, Elizabeth and his younger siblings, Earnest and William.

He also leaves behind his best friend Henry Clerval. He the describes his first glimpse into his treacherous future as where he first meets his natural philosophy teacher M. Krempe, he describes this meeting as a, “Chance- or rather the evil influence, the Angel of Destruction, which asserted omnipotent sway over me from the moment I turned my reluctant steps from my fathers door- led me first to M, Krempe. ” Here he is describing the first steps he took to his destruction into meddling forces which were not his to meddle with.

He also talks about his “reluctant steps” from his fathers’ door, suggesting that, this is not the path that his father wants Victor to take, so in a way, for the fist time in his life. Victor has started to disobey. M. Waldman, Victor’s chemistry professor, said the following phrase, that Victor says enounced to destroy him: “The ancient teaches of this science, promised impossibilities and performed nothing. The modern masters promise very little, know that metals cannot be transmuted, and the elixir of life is a chimera……

They penetrate into the recesses of nature, and show how she works in her hiding places. They ascend into the heavens: they have discovered how the blood circulates, and the nature of the air we breathe. They have acquired new and almost unlimited powers; they can command the thunders of heaven, mimic the earthquake, and even mock the invisible world in its shadows. ” These words, as we can see were the start of Frankenstein’s downfall into glory, he takes from this, his thirst to create a life, to pioneer a new way, explore unknown powers and unfold the deepest mysteries of creation.

This is where I think that Frankenstein starts to take everything a bit too far and where he starts to become like a monster himself, absorbed in his work, not caring for anybody around him. In chapter four it starts to talk about how Frankenstein finds a friend in M. Waldman, but how M. Krempe starts to in a way, put him down for believing in the natural philosophy branch of science, it also tells us of how Frankenstein is starting to forget about things around him when he says “Two years past in this manner, during which I paid no visit to Geneva.

” In not going to visit his family in Geneva this shows that Frankenstein is becoming so absorbed in his work he is forgetting his own family, and ultimately his Elizabeth. He says that he thought of going home once, but something came up that stopped him. This was his fascination with the human frame, he wanted to observe the natural decay of the human body, and for this, he would go to the churchyard and observe the dead bodies, this darkness he said had no effect upon my fancy, and he was forced to spend days and nights in charnel houses and vaults.

Here he is showing that he has no remorse for what he is doing and that he is heading further and further down the dark tunnel of monstrosity. The beginning of chapter five, it sets the scene as a dark and dismal November early morning, he describes the rain pattering against the windows when he saw the errors of his ways, when the creature first opened its eyes and took its first breath. Here I think is where Frankenstein could have tried to make his error, more amenable by not leaving the creature to either die or fend for it’s self.

He describes his creation as a “wretch”, but then starts to describe its features and limbs as “In proportion, I had selected his features as beautiful. Beautiful! – Great God! His yellow skin scarcely covered the work of muscles of muscles and arteries beneath; his hair was of a lustrous black, and flowing; his teeth of a pearly whiteness; but these luxuriances only formed a more horrid contrast with his watery eyes, that seamed almost of the same colour as the dun white sockets in which they were set, his shrivelled complexion and his straight black lips. 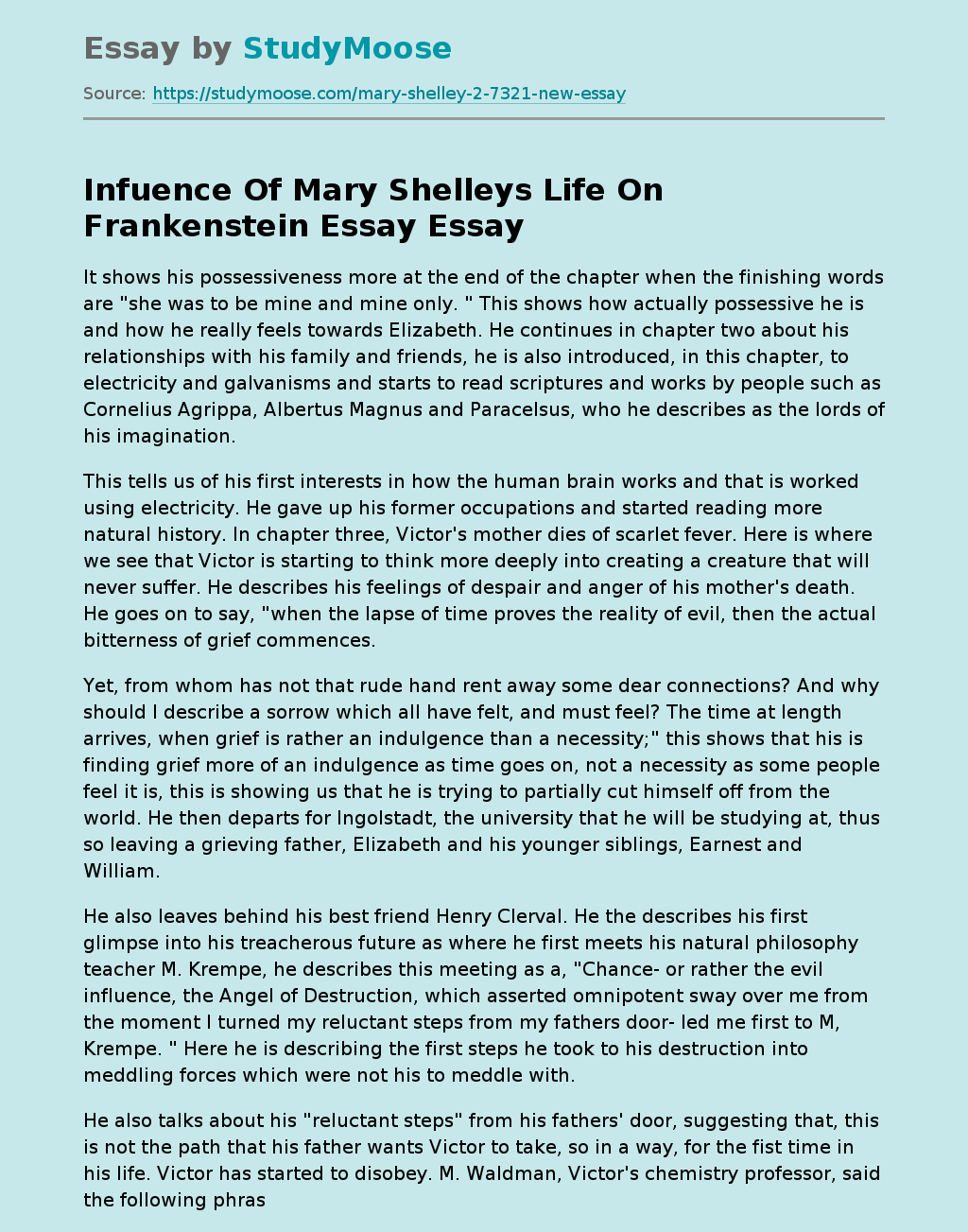