In the sixteenth, seventeenth, and eighteenth centuries of America, many settlers and colonists were taken captive by the Native Americans, commonly known as Indians. The Native Americans had many reasons and motives for capturing the settlers or colonists. Captives were often taken to be traded, ransomed, or “adopted,” which Native Americans did to replace tribal members who had passed or who had been killed. Two very famous captivity narratives are those of James Smith and Mary Rowlandson, whose stories are very different due to their captors, gender, and religion.

Don't use plagiarized sources. Get your custom essay on
“ Mary Rowlandson’s “The Captive” ”
Get custom paper
NEW! smart matching with writer

James Smith was 18 years old when he was captured by the Indians just miles above Bedford. Smith was captured by three Indians, one was a Canasatauga and the two others were Delawares. With the exception of being flogged, Smith’s experiences with the Indians were not terrible. He was essentially treated as an Indian. This stems from the fact that he was adopted by the Natives. James Smith was given many freedoms.

Smith was very trusted by the Indians. They allowed him to hunt with them or on his own, they expected him to act as an Indian, and they also trusted him to take care of them when needed. Smith also had the option to leave whenever he pleased.

He did not have to remain with the Indians for the four years, 1755-1759, that he did. These experiences are very different compared to those of Mary Rowlandson. Mary Rowlandson’s hometown of Lancaster, Massachusetts was destroyed by the Indians in King Philip’s War and she was taken captive during the destruction.

Mary Rowlandson was captured in 1676 and remained a captive for three months before the requested ransom was paid. Rowlandson had very different experiences from James Smith with the Indians. At her capture, she witnessed the Indians killing or harming many in her family. Rowlandson, herself, suffered a gunshot wound. James Smith was also harmed when first captured by the Indians; however, he had been aided by French doctors. Mary Rowlandson dealt with her gunshot wound on her own. She also had to carry her sick child for six days before the child passed away. Rowlandson was not able to read freely in front of the Indians, she was not given a fair share of the food, and was often forced to find other Indian tribes to spend the night with, or to receive food from.

Rowlandson was sometimes allowed to go and meet with family members who were with neighboring tribes. Compared to James Smith’s experiences, Mary Rowlandson had it tough when she was a captive of the Indians. Gender had a major effect on how the captives were treated. Native Americans often captured women because they were easier to capture, could bring in more ransom, and the Indians also believed that the women would be easier to control. Mary Rowlandson had to make clothes for others in order to either trade with them or to get money that she could then use to obtain food with. James Smith, on the other hand, was able to go out and hunt for the food he needed. The food that he and his fellow Indians gathered was evenly divided amongst the tribe. Rowlandson, however, was treated better by some tribes than the one she was being held captive in. Some Indians from other tribes would offer her food or opportunities to get money or goods that she needed.

This was likely due to the fact that women had more powers and were more respected in some Indian tribes. Smith was expected to help and fend for himself while Rowlandson was often provided with food, though it was not a fair share and was often not of the same value that Smith’s was. Overall, Mary Rowlandson was treated disrespectfully, unfairly, and as though she was inferior. Rowlandson had to fight harder to live, as her food was often stolen and her religion, her greatest hope and strength, was frowned upon during her captivity. Religiously, Mary Rowlandson was affected more than James Smith. Mary Rowlandson was very religious. Rowlandson was married to a minister of Lancaster. Mary Rowlandson’s faith and religion were the only things that kept her going during her captivity. The only thing she had to look forward to was reading her bible, though she had to do it secretly because once, her mistress caught her reading it, grabbed it out of her hands, and threw it outside. Rowlandson recovered her bible, but from then on she read it more secretly.

Mary Rowlandson believed that all of the trials that she survived and the blessings that she received were from God. Rowlandson wrote of leaving her captivity, “I have been in the midst of those roaring lions and savage bears that feared neither God nor man nor the devil, by night and day, alone and in company, sleeping all sorts together, and yet not one of them ever offered the least abuse of unchastity to me in word or action; though some are ready to say I speak it for my own credit; but I speak it in the presence of God, and to His glory. God’s power is as great now as it was to furnace. Especially that I should come away in the midst of so many hundreds of enemies and not a dog move his tongue.” Mary Rowlandson often quoted bible verses, one being Psalsms 27: “Wait on the Lord.” Rowlandson used this particular verse to persuade another captive against trying to escape and run away. and metaphorically related her experiences to stories of the bible.Mary Rowlandson depended upon her religion to survive her captivity.

Without, her faith, religion, and God, Mary Rowlandson would have had no hope, no reason to go on, or no encouragement to persevere through her captivity. James Smith was not extremely religious. Unlike Mary Rowlandson, James Smith did not depend upon religion to survive his captivity with the Indians. The Indians that Smith was with did not mind him practicing his own religion and they did not force their religion upon him. James Smith was, towards the end of his captivity, traveling with an Indian by the name of Tecaughretanego and his son Nunganey. After Smith laughed at Tecaughretanego’s religious ceremonies, Tecaughretanego said to him, “Brother,–I have somewhat to say to you, and I hope you will not be offended when I tell you of your faults.

You know that when you were reading your books in town I would not let the boys or any one disturb you; but now, when I was praying, I saw you laughing. I do not think that you look upon praying as a foolish thing; I believe you pray yourself. But perhaps you may think my mode or manner of praying foolish; if so, you ought in a friendly manner to instruct me, and not make sport of sacred things.” Smith learned a lot about the Indians’ religion through his experiences with them and learned to respect their beliefs.

Though the experiences of James Smith and Mary Rowlandson were very different, neither story will ever be forgotten. Perhaps that was their purpose for recording their exploits. The differences in their stories can be attributed to their sex, religion, and captors. Had Mary Rowlandson not been female, religious, or captured by the Indians she was, her story may have been very different. Also, for James Smith, had he not been male or taken by the Indians he was his story would have been completely altered. The qualities, beliefs, and characteristics of Mary Rowlandson and James Smith were essentially what saved their lives. 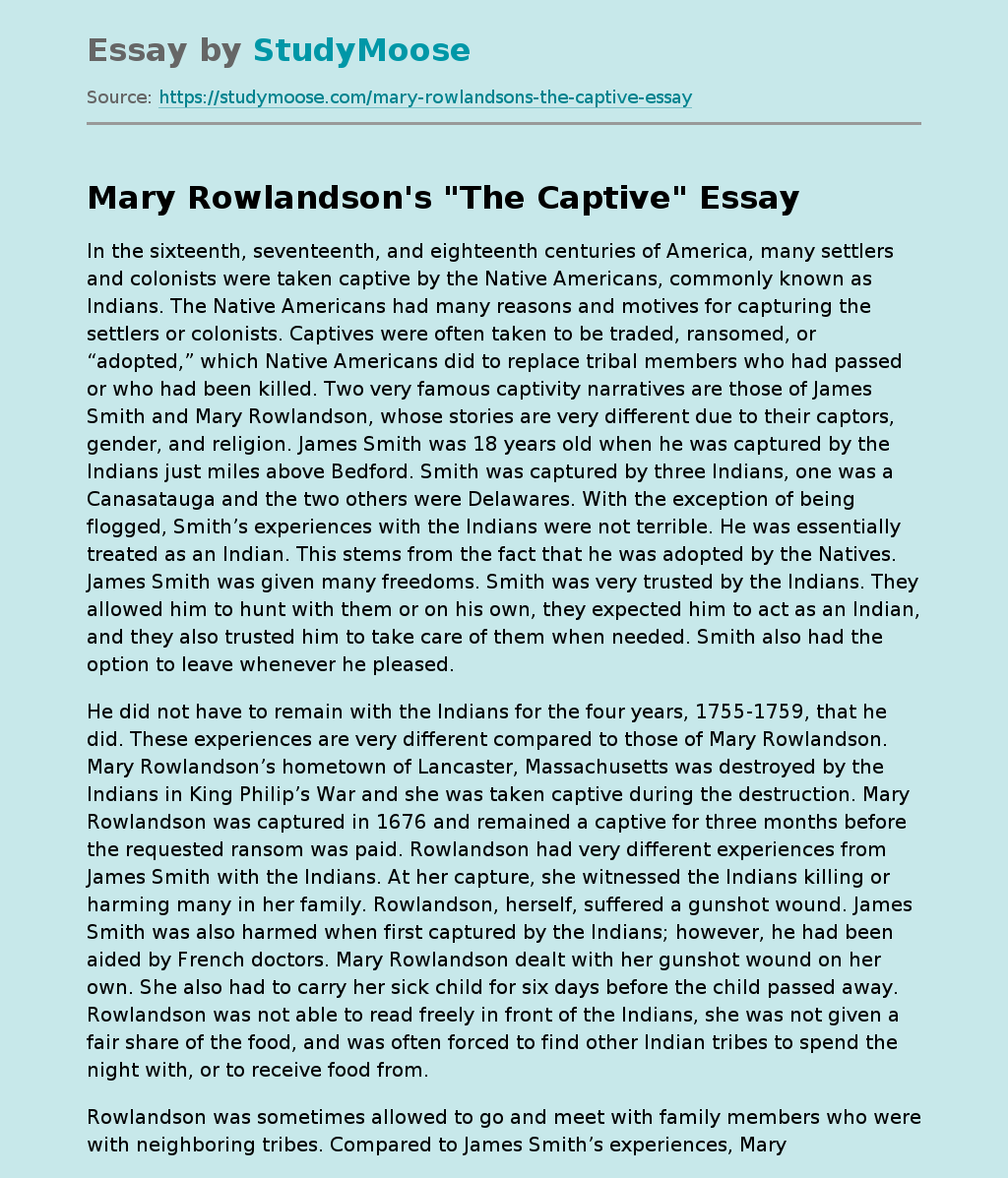