Marxism: Reflection Of The Problems In A Capitalistic Society

On the other hand, Marxism is a philosophic system that grew on, and intended to improve, on all of capitalisms injustices, such as lack of social justice and lack of care for the environment.

Don't use plagiarized sources. Get your custom essay on
“ Marxism: Reflection Of The Problems In A Capitalistic Society ”
Get custom paper
NEW! smart matching with writer

Marxism suggested that social justice should be achieved through two systems that would follow each other: Socialism, where the state would play a major role in the distribution of wealth and communism, where the ultimate goal of the human race where all the injustices would be entirely eradicated. Marxism calls for more social justice for workers.

Most modern labour laws are either based in the ideas of Marxism or were taken and extended by Marxism. Things like “minimum amount of sleep for workers,” “overtime,” “public holidays,” “maternity leave” and “education and pre-qualification for workers” were all promoted as the workers basic rights. Another major idea was the collective ownership of the means of production by workers which would take the unjust advantage of capital out of the hands of capitalist and return the added value into the rightful hands.

Social justice is prominent in another good idea of Marxism, the method of distribution.

In Marxism, everyone gets what they need and produces what he can. Also, the government is responsible for social justice by enforcing a universal health care system, a free schooling system, massively educating the poorest. Eradication of illiteracy was one of the main goals of Marxism. Marxism suggested production that was driven by need, and not by profit, thus living harmoniously with the environment.

One of the major problems of Marxism is that it left revolution in the hands of the most illiterate people who did not properly express Marx’s original ideas. By giving the government a greater role in education and health, the government also was given a disproportional role in governing. All of society formed on this idea, which turned the societies into dictatorships and tyrannies. The idea of “take what you need and work as much as you can” didn’t reflect true human nature, which resulted in non-existent productivity and lazy workers that were paid to do however little work they chose.

Also, the Marxist society abandons democracy completely in favour of the workers being represented by only one party which became equal to the state. Getting workers to decide about the fate of their factories resulted in poor decisions based on lack of knowledge in management. Lots of the ideas of Marxism were devised with great optimism for human nature, but could simply not function. Any type of governing, either on a national scale or within a factory was doomed to disaster as it could not be properly enforced by democratic means.

Lack of control of government always results in tyranny. The positives of the social justice system, especially regarding education, pension and health care, far outweigh the negatives. Where people would receive equality, a good education, a safe pension and great health care they would only really lose out on control, which would not even be a problem under Marxism’s assumption that people would want to work for the greater good.

Considering these points, the system of communism (which is promoted by Marxism) would appear to be a more just system, although is not practical at all. For Marxism to be successfully implemented, very high levels of social and economic development are needed. Almost all the countries in the world lack the development required for a successful transition. As far as fairness and equality goes, Marxism would be the winner. But because it is so difficult to implement, no matter how just it isParagraph 1, it is not a practical solution.

Marxism: Reflection Of The Problems In A Capitalistic Society. (2017, Jan 31). Retrieved from https://studymoose.com/marxism-reflection-of-the-problems-in-a-capitalistic-society-essay 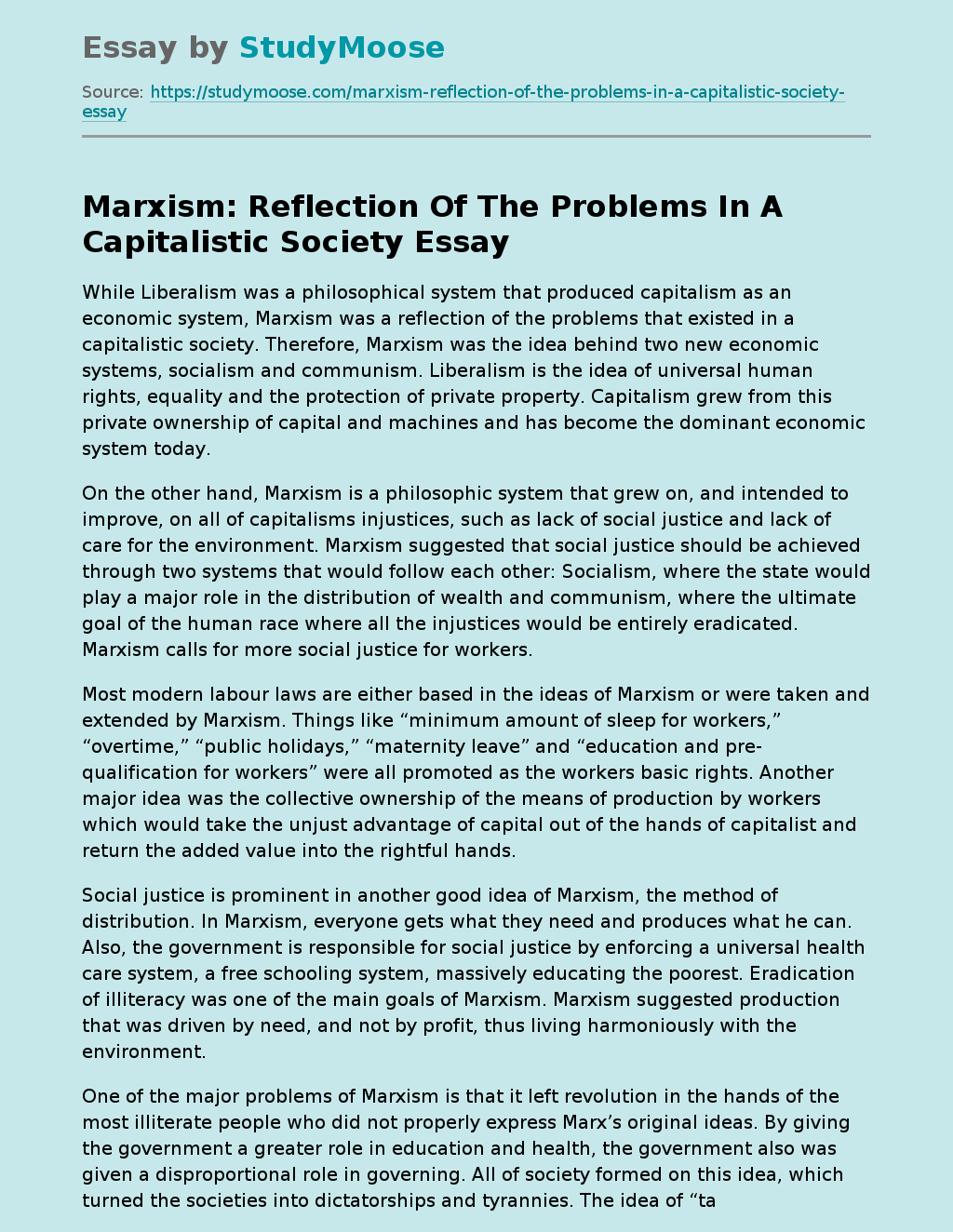