Martin Luther King Jr. the Most Important Individual in Our History

There are many important people that have helped shape our country into what it is today. But that included mostly just president and just a few other people in power. The most important individual in our history is Martin Luther King Jr. or the “King” as his followers would call him. It was surprising that he was never really mentioned in class he was in the book, but he was never discussed. We briefly mentioned Rosa Parks and how by simply sitting at the front of a bus she started a whole movement against segregation.

Don't use plagiarized sources. Get your custom essay on
“ Martin Luther King Jr. the Most Important Individual in Our History ”
Get custom paper
NEW! smart matching with writer

Martin Luther King Jr. was an inspiration to every African American who was too afraid to fight for the rights they deserved to have.

Martin Luther King Jr. is known mostly because of his speech “I have a dream” he starts his speech by saying “I am happy to join with you today in what will go down in history as the greatest demonstration for freedom in the history of our nation.

” (King) he knew that he would always be remembered in history from the moment he sat down to write his speech. In his speech, he talks about how President Lincoln freed the slaves yet 100 years later they are not truly free, that their lives are still being discriminated, and are being exiled of there own land. King talks about many challenges the African Americans are facing even though they are supposed to be free and equals.

The reason why Martin Luther King Jr. was an amazing speaker because before being a leader of the civil rights movement he was an American Baptist minister.

King comes from a long line of African American Baptist church this had a huge role on who Martin Luther King turned out to be. Because he was a Minister, he was 100% against violence, he had so many people following him and he could have easily told people to do violent things in other to make change happen, like the Black Panther Party, but he instead chose to do things peacefully making sure nobody got hurt but they would still be heard. In his speech, he says “We must forever conduct our struggle on the high plane of dignity and discipline. We must not allow our crea¬tive protests to degenerate into physical violence. Again, and again we must rise to the majestic heights of meeting physical force with soul force.” (King) even though he wants to change he wants to make sure everyone understands it must be done peacefully. Even though he stood for peace some of his protests ended in violence, in a protest against poor treatment of sanitation workers violence struck causing the death on a teen African American who was part of the protest.

Sadly, on April 4, 1968 King was killed in a Motel balcony in Tennessee. (History.com) King was in Tennessee to support sanitation works strike and was headed to dinner when a bullet hit him and severed his spin, he was announced dead in the Memphis hospital at the shortage of 39 years old. King fought for civil rights for the last 13 years of his life and fought until his final breath. Months before his death Martin Luther King was fighting for equal pay because most African Americans and other minorities would get paid less than a white man, even though the minorities had more difficult jobs with unhealthy and unsafe environments. Martin Luther King Jr. lived a remarkable and inspirational life so many intellectual, cultural, and political developments were inspired because of him and what he stud for. People like the King never really die because he will forever be remembered for his bravery and commitment to make the United States a free and most of all equal country for every citizen.

Martin Luther King Jr. the Most Important Individual in Our History. (2021, Feb 04). Retrieved from http://studymoose.com/martin-luther-king-jr-the-most-important-individual-in-our-history-essay 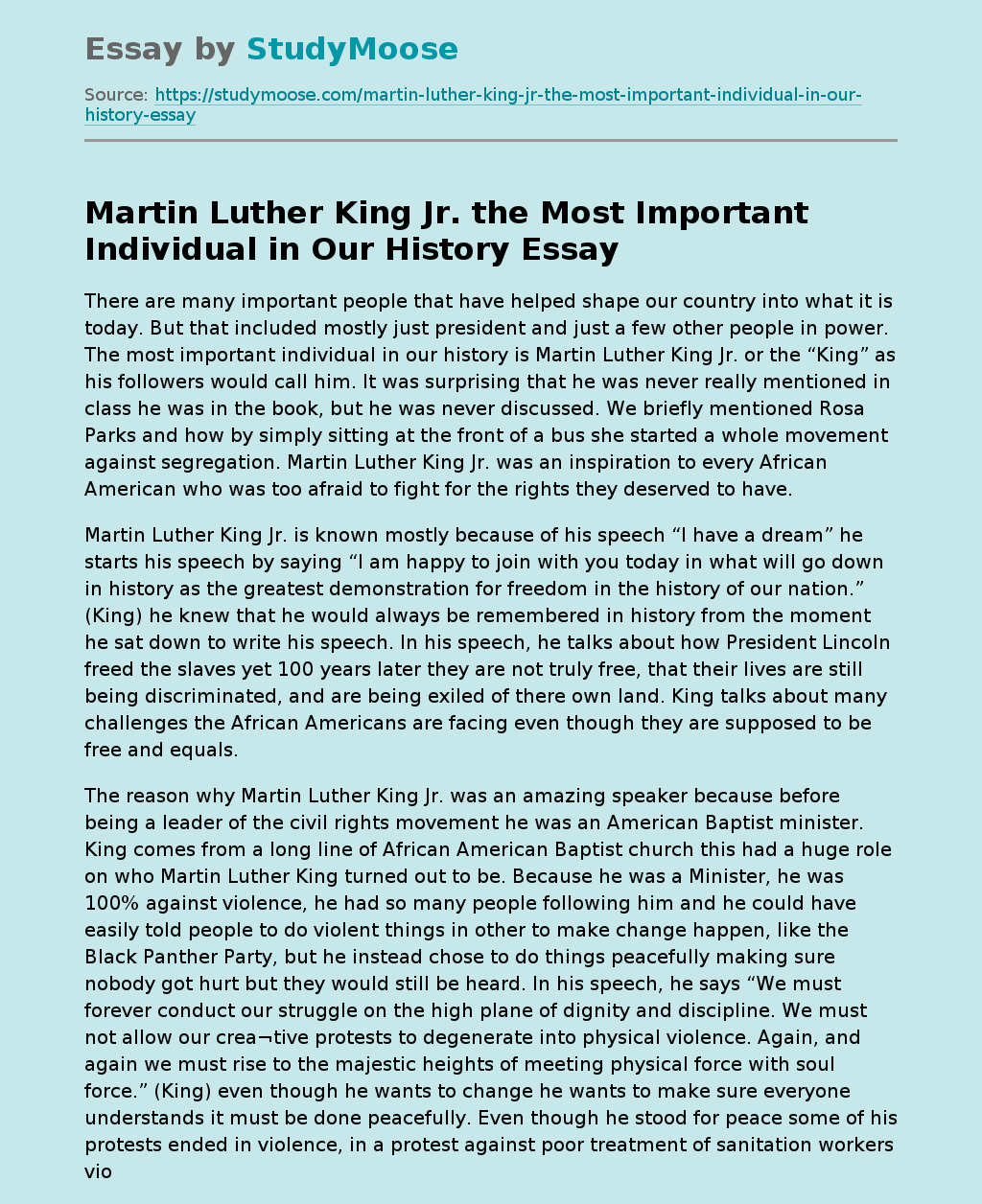