Martin Luther King and Malcolm X: Whose Philosofy Made Most Sense

Don't use plagiarized sources. Get your custom essay on
“ Martin Luther King and Malcolm X: Whose Philosofy Made Most Sense ”
Get custom paper
NEW! smart matching with writer

He was a smart student and passed the enterance exam to Morehouse University at the age of 15.

Malcolm X was was raised in a completely different place than King, an a place of and anger. Becaue of the burning of his house his father died. His mother then suffered a nervous breakdown and his family was split up. After his mother had a mental breakdown, the he was placed in foster homes. Malcolm X’s anger was increased as he went through integrated schooling.

he was driven by hate and a desire for revenge. he decided to drop out of school and move to Boston with his half sister. Because of the life that Malcolm X and Martin Luther King lived was responsible for the distinct different responses to American racism.

Both men were important to the African-American culture and had a great influence on black Americans. However, King had a more positive attitude than Malcolm X. He believed that through peaceful demonstrations and arguments blacks were able to someday achieve full equality with whites.

Because Malcolm X’s life was based on angry belief he thought that equality was impossible because whites had evil. King basically adopted on a more peacefull philosophy that thought that blacks and whites should be united and live together in peace, but Malcolm X promoted nationalist and separatist doctrines.

For most of his life, he believed that only through revolution and force blacks and white wuld be equal and live in a better inviorment. Education was also important. Blacks and whites. they where segregated and the conditions in sertain schools where not good. King knew that black people were’nt completing high school as much as white people. Malcolm x also was intersted in desegregated education, and stoping segregation in schools. They wanted schools to be equal and they both worked hard trying to break it.

Malcolm x and martin luther king had different views on economics. One thing that martin luther king thought that black people should do is black people should try to go to protest for their belives. Malcolm x belived that if black people where to defeat with violence. The white people would give blacks what they deserved. Martin Luther king and Malcolm X both had different views on how america should be and people also saw them as two different people but they both had the same target. That target was to make blacks and whites free and equal.

Even though Malcolm X belived in violence in order to get his way for the people he made a huge in america. So did Martin Luther king. He wanted people to show peace and Non-violence in order to get equality. In conclution, whose philosophy did make the most sense for America in 1960’s? Well martin luther kings philosophy mad more sense because he wanted to bring peace to the people, he was fair to all white and black people, and he connected more with the people since he belived in Cristian religion.

Martin Luther King and Malcolm X: Whose Philosofy Made Most Sense. (2017, Jan 26). Retrieved from http://studymoose.com/martin-luther-king-and-malcolm-x-whose-philosofy-made-most-sense-essay 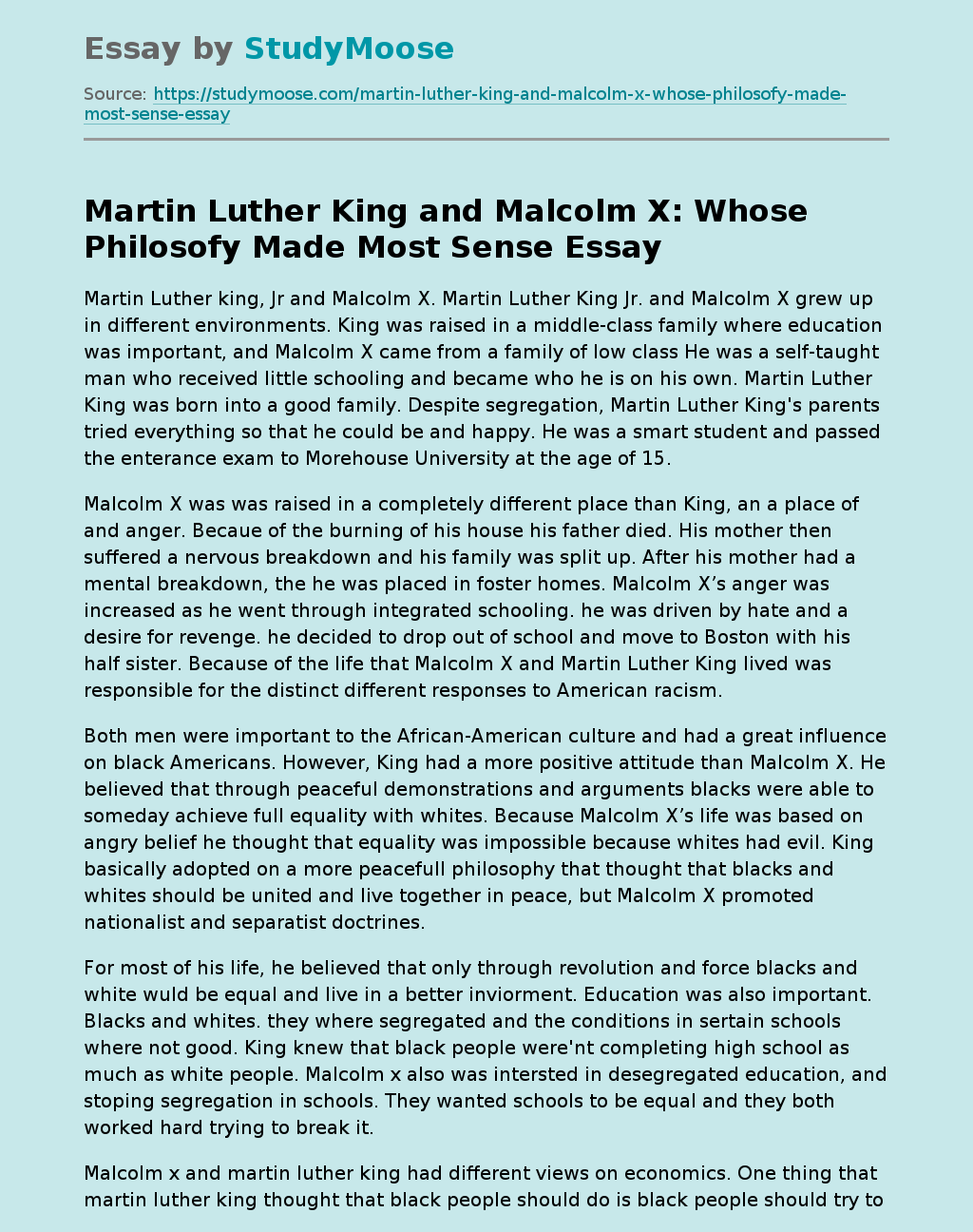