Marriage in the 19th Century

Marriage in the 19th century was mainly dominated by the men. Women had very little importance in marriage. Their role was to raise children and the men were in control. Both of the stories take place in the 19th century during which time women were treated unfairly. Both stories showed and criticized the male dominance and how women were treated.

Kate Chopin, writer of “The Story of an Hour”, was born in 1850 in St Louis. She was born with the name Catherine O’Flaherty.

Don't use plagiarized sources. Get your custom essay on
“ Marriage in the 19th Century ”
Get custom paper
NEW! smart matching with writer

She was the third of five children. She married Oscar Chopin in 1870 and lived in New Orleans. She and her husband had 6 children. When her husband suddenly passed in 1882, she moved back to St. Louis with her mother. After moving to St. Louis she soon lost her mother. She became very depressed so her doctor encouraged her to write in a journal. This empowered her and encouraged her to write short stories.

Charlotte Perkins Gilman was born in 1860 in Connecticut.

She had one brother. Her father abandoned them. She married an artist named, Charles Walter Stetson in 1884. They had one child together. After giving birth she suffered from what we now call Post-Partum Depression. She later divorced her husband and moved to California. This is where she became a feminist and reformist on women’s rights. She later wrote and published magazines, poems, and short stories. It wasn’t’ until she wrote “The Yellow Newspaper” her career sky rocketed and she began lecturing on Nationalism.

Both the “The Story of an Hour” and “The Yellow Wallpaper” are based on women finding their freedom.

The way Mrs. Mallard in “The Story of an Hour” locks herself in her room after discovering that her husband suddenly died and she looks out the window and sees a bird in the open sky. She at that point is feeling as free as the bird.

While Jane in “The Yellow Newspaper” is driven into a mad depression. She felt trapped in a marriage once she gave birth by being trapped in a house/life. She became insane as she locked herself in a room with yellow wallpaper. She felt free when she could choose “when the sun came in”.

There are different points of views about marriage and women’s rights. During the time the stories were written there is controversy about women’s roles. In the 19th, women’s roles were to raise the family and keep the house.

Kate Chopin is somewhat relating to herself in the “The Story of an Hour” When her husband suddenly passed in 1882. She became very depressed so her doctor encouraged her to write. She felt freedom with the passing of her husband just as Mrs. Mallard did in the story.

In “The Story of an Hour” Mrs. Mallard is somewhat confined to her life by marriage, her ailing heart, and to her home which she doesn’t leave. She felt powerless over her life no freedom at all. She is overcome with grief after learning of her husband’s death until she comes to the realization that she is free.

She is overwhelmed inside about her new found freedom she can barely speak. “When the storm of grief had spent itself she went away to her room alone. She would have no one follow her” (Chopin 10). She went to her room “alone” no one following her as in the past her husband would always follow her to her room.

She even seems to be exhausted at times thinking about her freedom. “Into this she sank, pressed down by a physical exhaustion that haunted her body and seemed to reach into her soul”. (Chopin 15) IT’s like she is still not free her tiredness has her confined to one room and its pressing on her soul.

Mrs. Mallard feels as though she is still powerless. “as powerless as her two white slender hands would have been. When she abandoned herself a little whispered word escaped her slightly parted lips. She said it over and over under the breath: “free, free, free!” Although she free she still cannot grasp the ideal so she cannot be freed from her thought of her freedom

It makes sense that Chopin would write a story about a woman longing to be free. Since Chopin thought herself to be a forerunner on women’s freedom. She points out in the story that Mrs. Mallard although is free is unable to show her freedom. Much like Chopin although she was a feminist she still had yet to speak out publically about women’s rights.

There is liberation that takes place within Mrs. Mallard. She is finding peace since is no longer bound to her life by her husband. Women’s rights were just beginning in the 1840-50’s. Women made these changes happen by standing up for themselves. She shows how are it is for a woman to express her new found freedom.

“The Yellow Wallpaper” shows how the roles of women in a home. It details how having no ability to make decisions can make a person go crazy.

Charlotte wrote fiction and poems. She had a desire to be useful in world-to have a purpose. “The Yellow Wallpaper” was partly based on Gilman’s own works like “Women and Economics”.
Similar to “The Story of an Hour”, “The Yellow Newspaper portrays a woman with have less importance in a marriage, being confined to the life of a housewife. It shows how women much like slaves to her marriage and life.

The woman’s role in “The Yellow Newspaper” was shown when her husband and male doctor decide she needs rest to cure her state of mind. “Rest is the cure. (Gilman ) They seem to know how to cure her. She has no say in the matter at all as her husband takes her away.

They confine her to a mental hospital/country home to help her rest. How being in the room alone she is never freed. “Its as if she is behind the bars” (Gilman ). Although they think they are freeing her of her mental state she still sees herself as being in a prison behind the bars.

She tries to set herself free by tearing off the wallpaper. Gilman tries to show how women are repressed in the world. She wants to show that women don’t hate men but that they too need roles and voices.

During Gilman’s writing was during great change in the world. Women’s way of thinking was changing but yet they were so vunerable. They wanted a place in the world. She talks about how women have challenges in the 19th Century.

Gilman shows us how women are trying to literally tear their way into the world with the tearing of the wallpaper.

Chopin takes on issues involving women’s independence in marriage although the freedom was short lived in “The Story of an Hour”. Chopin was trying to show that women can do just fine without a man bossing them. It is hard for me as a male to give examples of a female’s place in society as I have never had to deal with that stereotype. From my findings the late eighteen hundreds were a rough for women and they didn’t have any other options.

Gilman write about woman in the room to show her part of her own personal experiences in narrowly escaping mental melt down in her own marriage. She tells readers how motherhood, marriage and women’s roles in the 19th Century play a big part on women’s health. 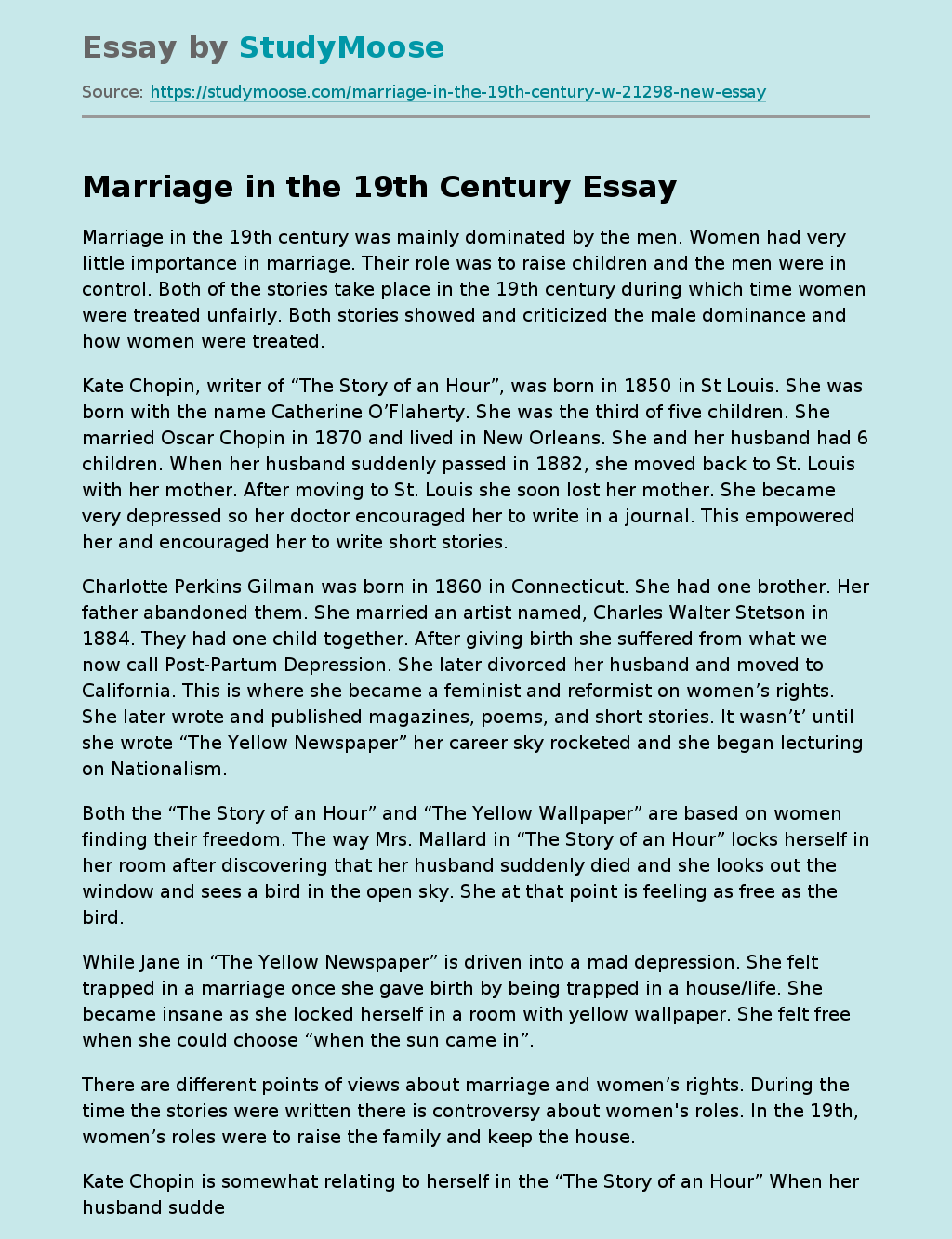