Tesco, the third largest retailer in the world, underwent a change of leadership in March of 2011. Sir Terry Leahy stepped down after a highly successful 14 year run with the company that saw the retailer reach 30% control of the British market (Anonymous, 2012). However, the last year and a half has seen declining market share and stock prices. Additionally, the long-term growth strategy of penetrating the US and Chinese markets has not gone as well as anticipated (Anonymous, 2012). This fact, combined with the declining British market share and corporate stock price has created a sense of urgency and has brought about the need for Tesco to rethink their current marketing management strategy.

Turn in your highest-quality paper
Get a qualified writer to help you with
“ Marketing Recommendations for Tesco ”
Get high-quality paper
NEW! AI matching with writer

When looking at Tesco’s base business model, the majority of their revenues come from the British market. They saw net income of 2.8bn last year (2011), versus 800m when Sir Terry Leahy took over the company in 2002. However, income is expected to drop to 2.6bn in 2012 (Oliver & Armstrong, 2012). This lost market share and drop in revenue is directly attributed to Tesco’s failure to maintain its focus on its core business at home in Great Britain.

Instead, the focus of the company was, arguably, too forward focused on global growth in both the US market with its Fresh & Easy stores and the Chinese market (Oliver & Armstrong, 2012).

This will be vital to the long-term success of Tesco, as its competitors have been doing everything to capitalize on Tesco’s lapse of attention.

Tesco’s idea of becoming a global competitor is not a mistake. It is a great plan, especially with the growth that many companies have experienced with the opening of the Chinese market and the explosive growth of Chinese spending power and lack of growth in the British market. However, Tesco is guilty of being overly aggressive in their desire to become a global player. They have been very successful in diversifying their business endeavors within their home market. They have expanded into soft drinks and banking, very successfully. Their positioning as a global player could be likened to an army attempting to fight a war on three different fronts (Britain, US, and China).

They lack the resources to handle such an ambitious endeavor. I was pleased to read that Philip Clark, Tesco’s CEO, finally ended the Fresh & Easy experiment, and is pulling out of the US market. While this may be interpreted as an admission of failure, I think it shows that Tesco is ready to refocus on their core business. I am not the only one to feel this way, as Tesco shares climbed three percent following the announcement (Oliver & Armstrong, 2012). Tesco is still involved in the Chinese market, which has the greatest upside when compared to the US market. This move allows Tesco to focus on a two front fight – attempting to recapture lost British market share while successfully growing share and revenues in the Chinese market by using a well thought out market focused strategy.

The withdrawal from the US market should allow Tesco to refocus on the product quality that has been neglected over the past five years. Even though the British market is not growing, Tesco needs to maintain its market dominance and can only do this by investing in its existing product (Oliver & Armstrong, 2012). The departure from the US market means that capital expenditures and operating capital should be diminished, allowing those funds to be reallocated to the British stores. This will help support the refocus on product quality announced by Mr. Clark, with a promise to invest 1 billion pounds to revitalize the British operations. With properly spent funds, Tesco should be able to recapture lost market share, consequently shoring up its core business.

When considering the four factors of marketing (price, product, placement, and promotion) Mr. Clark needs to continue with the differentiation strategy they have employed with Tesco’s forays into soft drinks and banking. Utilizing Britain’s largest distribution chain, Tesco could capitalize on the strategy utilized by the US retailer Wal-Mart, and differentiate their stores by offering a variety of businesses (fast food, optical, banking, hair and nail care) under one roof. These moves, if effective, would also provide additional foot traffic to their core retail operations, further increasing market share, and revenues. Tesco must carefully consider the market mix and pricing decisions needed with a strategy such as this. If properly implemented, they could secure Tesco’s market dominance for years to come.

Tesco is the largest retailer in Britain, and the third largest retailer in the world. However, being big does not guarantee success, and being a key player in Britain does not mean that you can be a key player in the rest of the world. Tesco has effectively demonstrated these facts over the past four years while trying to break into the US and Chinese markets while ignoring their core British business. Philip Clark, the CEO of Tesco, has realized that the company does not have enough resources to continue to attempt to penetrate the US and Chinese markets and keep their market share in Britain. Mr. Clark has withdrawn from the US market and is refocusing the company’s marketing orientation back to its core business and China.

Tesco is refocusing on its product quality by taking the funds that had been allocated for US expansion and reinvesting in their existing store British product. Mr. Clark should consider further differentiation of their British product by following the highly successful model employed by US retailer Wal-Mart of putting multiple businesses under the same roof. Mr. Clark should also continue to focus on succeeding in the Chinese marketplace, the fastest growing market in the world in 2012. If Tesco is able to recapture lost British market share, and can grow at a profitable rate in China, the company will be well positioned for 2013 and the future. 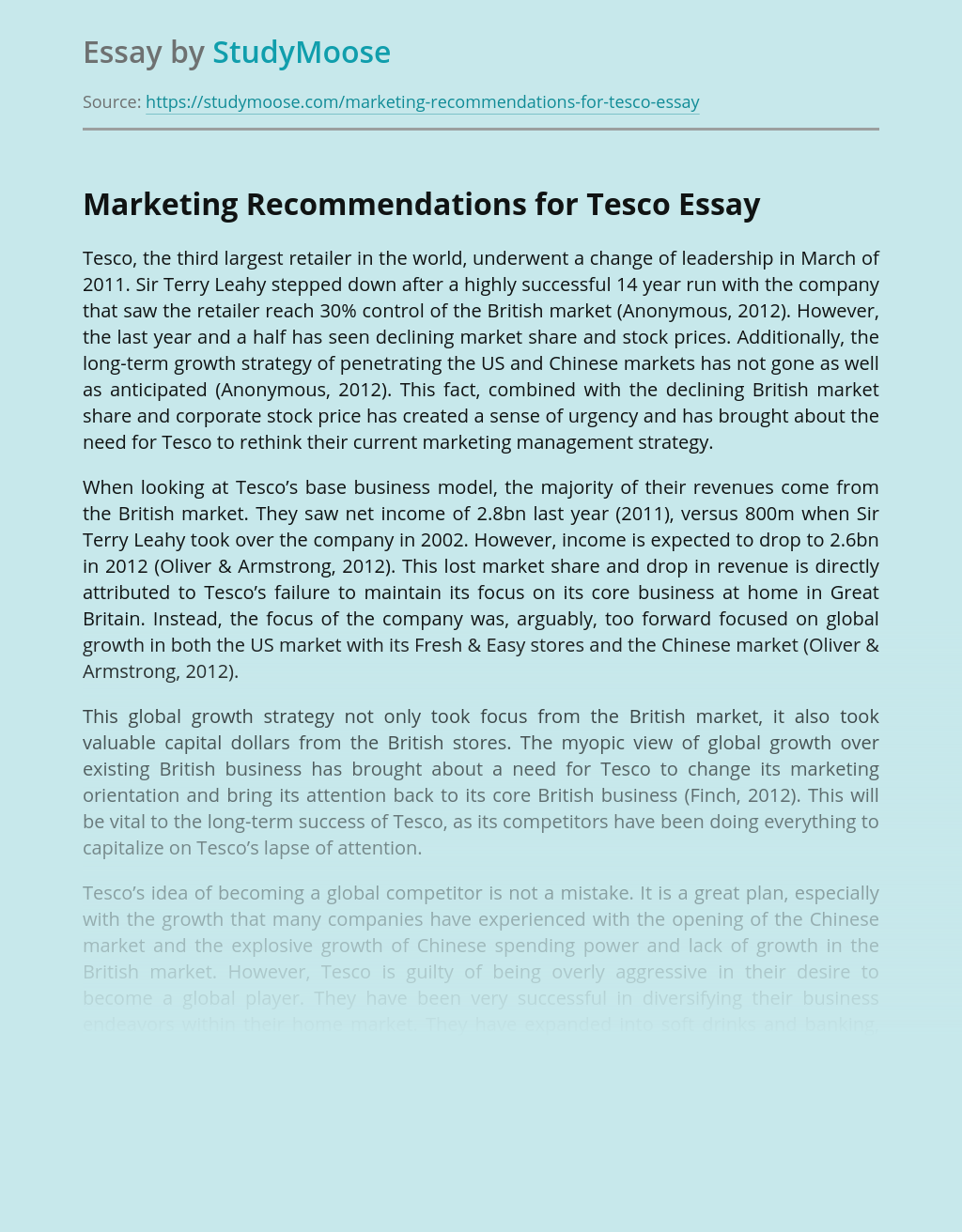 Turn in your highest-quality paper
Get a qualified writer to help you with
“ Marketing Recommendations for Tesco ”
Get high-quality paper
Helping students since 2015
Stay Safe, Stay Original