A well-known health and beauty company, Paramount is launching a high-technology nondisposable razor, Clean Edge. They are searching for the most efficient way to gain market share. Their concerns come down to three main problems: whether they should target niche market and price the product in the super-premium segment, or aim mainstream market and gain broad appeal, ;whether they should just emphasize the product name “Clean Edge” or add “Paramount” at the front to broaden brand image;whether they should sustain current market allocations and focus on niche market or increase the marketing budget for extensive advertisement in the mainstream market.

Don't use plagiarized sources.
Get Your Custom Essay on Marketing Recomendations for Clean Edge Razor Just from $13,9/Page

In the past, nondisposable razors merely served as hair removing tool for the vast majority of the population. However, as personal images became important in social life, hair removing routine became a means of gaining confidence for some people. For this reason, customers started to seek nondisposable razor that not only effectively removes hair but also protects skin, and further gives them sense of luxury by utilizing the best technology.

Understanding customers’ tendency to always search for newest and advanced products, Paramount developed Clean Edge using their unique technology. Although they were confident about quality of their product, their competitive position was not stable. They had two big competitors, Benet & Klein and Prince which already had loyal customers throughout the world, not to mention other new competitors that started to threaten Paramount with their groundbreaking products. Moreover, because Benet & Klein and Prince’s expenditures in advertising exceeded those of Paramount, it was difficult for Paramount to take away the market share and brand recognition. Using 4P strategy to analyze Paramount’s potential was helpful.

Clean Edge is a very competitive and advanced product that can attract a lot of men of all ages. They also have increasing retail channels that allow them to sell Clean Edge in a diversity of venues. The problem occurs when determining the price of this product and finding promotional outlets. If the price of Clean Edge is lower than other existing nondisposable razors, it certainly would gain broader appeal, but will not be welcomed by customers who are looking for high-end products. This possibly would bring about cannibalization, eating out their own brand image. On the other hand, if the price is higher than other existing nondisposable razors, it may successfully enter niche market, but customers who are already loyal to Paramount may be wooed away to seek for other brands. Their decision on a proper price point also influences their promotional strategies. If they decide to remain in the niche market they only need to target a specific customer group who would be intrigued by their products, thus, their expenditures in advertising would likely decrease.

This is more effortless and direct, since Paramount is already aware of the demographic segment of the market. However, they would have to cultivate certain promotional strategies to build firm and intimate relationship with potentially would become loyal customers of Paramount. If they maintain a mainstream position, their revenue would increase since they would sell more, but they would have to conceive ways of getting more customers involved, from advertisements using media to discount promotions. Although in niche positioning, production unit cost is higher and unit volume is much lower than in mainstream positioning, advertising and promotion costs are more than two times lower. Their effort of reaching out to more people is revealed in promotion costs.

Niche Market – it is clear that Paramount’s market share is steadily increasing while other competitors’ market shares are slightly fluctuating. This is definitely the perfect timing for Paramount to improve their brand quality by entering to the niche market, at the same time slowing down strong growth of new competitors. According to financial data (see appendix 1), it is true that net profit is much higher in mainstream positioning, due to higher volume and lower unit cost. However, considering that Paramount’s nondisposable razor market share is continuously increasing from Paramount Pro and Avail, which are not super-premium products, suddenly introducing Clean Edge in the mainstream market to get mass appeal would cannibalize Paramount’s existing brands, potentially degrading Paramount as a ‘cheap brand’. Do not keep “by the Paramount” label – Considering that Prince and Benet & Klein are still better known to customers not just for the razors but also for other health and beauty products, it is uneasy for Paramount to get their brand name widespread in the market, especially when they are spending less budget on advertising. Radiance, the new competitor that specifically targeted super-premium razor market and spent $16.1 million dollars on advertising in 2010, successfully entered and survived the competition, and gradually gained title of ‘super-premium’ brand.

On the other hand, because Paramount originally started with mid-low priced value products, it is difficult to predict customers’ reaction when they launch Clean Edge with the name of Paramount. Predictions may vary but some customers would not trust the high-end products made by Paramount. Since some Paramount executives believe design is the major breakthrough that will differentiate Clean Edge from other nondisposable razors, Paramount can start off with a whole new image, without having to attach their brand name. A good example is Lexus, the luxury vehicle division of Japanese automaker Toyota Motor Corporation. One of the biggest reasons why Lexus gained worldwide profit was because they did not emphasize the quotidian brand of Toyota. Sustain current allocations but partially increase advertising budget- Advertising is a necessity when it comes to launching new product. Nonetheless Clean Edge has a groundbreaking design, without the support of advertisement, it is impossible to attract customers to try new products.

It is reasonable to put more budget allocations, but using a completely different approach from mainstream positioning. Promotions such as free trials or cents-off coupons are for customer groups that are easily affected by fluctuating prices. What Paramount is aiming for is the customer groups that are seeking for high-end luxury products that would generate social and emotional satisfaction. Traditional TV and Newspaper advertisements may suit such a niche market, since a lot of customers who tend to use nondisposable razors are in older age groups. Accordingly, good customer service in making them feel special is essential to the niche market. Especially because involved razor users believe shaving is a way of improving their self-esteem, they would want to be treated in a way that they are being cared. Using social media to constantly connect with the customers is a great approach to win over customers’ mind. Allocating budget in customer service therefore, is another way to gain loyal customers.

Marketing Recomendations for Clean Edge Razor. (2016, May 17). Retrieved from https://studymoose.com/marketing-recomendations-for-clean-edge-razor-essay 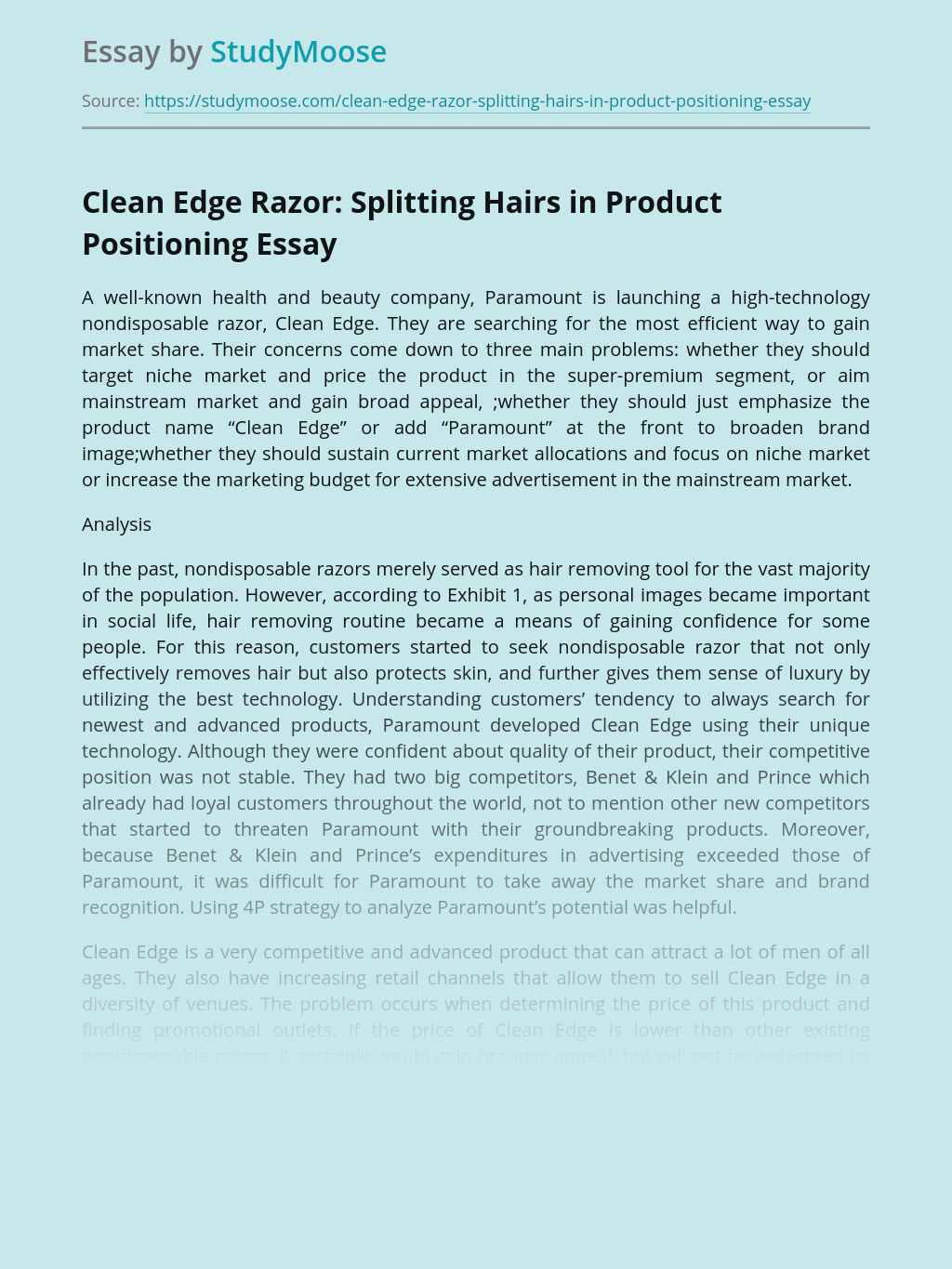 The effectiveness of business information

D2 – Evaluate the effectiveness of business information and its communication as key contributors to the success of an organisation, using examples to illustrate your points. For a company to be successful, it is essential it has a efficient communication and information management system. Aldi, in the last decade, have become globally dominant within the...

MARKETING EXCELLENCE- NIKE The case explains how Nike successfully marketed it products by getting it endorsed through top athletes, who influence the buying decision of brands and products of others and created its brand image by associating the products with their persona. By signing the Michael Jordan and relating it air Jordan shoes to his...

Qn 1) Explain what is Levi’s brand image and what makes up its brand equity. In this regard, assess the role of its flagship 501 jeans product. (40 marks) Brand image can be defined as perceptions about a brand as reflected by the brand associations held in consumer memory. It is basically what exists in...

The Role of Advertising Appeals

Abstract: The importance of our research work is for marketing and advertising concerns that how they can make their advertisement more effective and efficient. It also gives direction for marketing managers and advertisers for the application of appeals in their ads. TV ads attitude is made by using different appeals and celebrity expert roles and...

The Influence of Political Advertisement

The effect on TV ads on voter impressions is related to the political advertising on TV, which has been taken place for most political elections since television ads have become the primary tool of communication in American campaigns. A political ad “advertised whose central focus is the marketing of ideas, attitudes, and concerns about public...