The marketing plan which will govern the company’s marketing endeavors in its Five Year plan is created by the co-founders of ABC to apprise all internal stakeholders of the current situation of the business and the direction the company is preparing to take for the next five years, so that everyone is onboard and ready to contribute effectively. In the recent years there has been a dramatic shift toward healthier eating habits, which has resulted into a robust market for vegan and organic products.

This has led to growing opportunities for existing businesses but has also led to a number of new entrants, thus requiring the existing players to adopt robust marketing strategies to remain ahead of the curve. ABC has been able to attain a dominant position in the local market and it now aspires to embark on a growth trajectory by consolidating its gains and expanding country wide within the next five years by adding more outlets and going into franchising within the next five years.

ABC is a growing urban café which has all the features of a restaurant but at the same time maintains its cozy and intimate coffeehouse core. The café focuses on providing its patrons healthy options without a compromise on taste. The cafe’s unique selling proposition is being an exclusively vegan and organic eatery. The café was started by two culinary arts majors in their final year of college out of their home kitchen. Their startup business soon acquired a reputation as a healthy yet economical food choice for college students deprived, for the most part, of well balanced food options in and around the campus.

Their business grew exponentially making them turn it into a full fledge specialty café.

The café’s focus college students has remained at the core of what they do but they are now starting to branch out to become a place of choice for young professionals looking for a quick and healthy bite going about their busy days.

Mission and Goal Mission: ABC’s mission is to be the leading all-purpose brand in the healthy organic and vegan café products while retaining its welcoming and intimate feature of a small coffeehouse. Goals ABC has come up with a number of financial and non-financial goals which it envisages to achieve in the next five years.

‘ ABC hopes to move towards renewable energy sources for its location with green financing obtained from banks. ‘ Additionally, ABC plans to obtain financing from creditors to open new outlets in the downtown area. ‘ ABC also plans to increase its revenue numbers by a solid 100% on the back of consolidation of their existing market in addition to widening its target market and introducing new product lines with expansion in distribution through strategic alliances and partnerships. ‘ ABC also plans to increase reliance on analytics from their web presence to be able to improve their inventory management systems leading to better anticipation of stock outs and consequent sunk costs.

Non-Financial Goals: ‘ ABC plans to open an outlet in the downtown area with an aim to make inroads in the bustling financial and economic hub of the city. ‘ Towards the end of the next five years, ABC plans to start franchising to take the brand from being a statewide name to country wide name.

Following are some core competencies of ABC. ‘ Crafting new and unique products, making transitions to vegan and organic food options, much easier and actually enjoyable. ‘ Crafting vegan ‘meats’ to provide a fully vegan experience without a compromise on set taste preferences. ‘ Fresh supplies through a lean and robust distribution system direct from the farmer’s markets. ‘ High degree of customization available to customers to craft their choices of burgers, pastas, pizzas and salads. ‘ Focus on providing a vegan/organic variant to everything found in a regular fast-food and coffeehouse. ‘ Rigorous focus on following ethical best practices across all facets of business.

ABC has been able to gather a strong core customer base. While ABC might be doing well for the time being, there are a number of other situational elements that need to be considered for ABC to have a well rounded strategic view of all the strengths, vulnerabilities and constraints it is faced with.

To do that the following SWOT (Strength, Weakness, Opportunity, Threat) analysis is conducted. Strengths ABC has the advantage of being a first mover in the vegan and organic healthy eating business within the context of a college campus eatery. This enables ABC to charge somewhat premium prices with flexibility and margin to reduce prices to sustain competition if need be. The perception of ethical and healthy eatery results in a positive brand image of ABC among ethically conscious and healthy food enthusiasts on college campuses.

The inherent weakness in tapping into a niche is the size of the market opportunity in it. It especially becomes a bigger challenge if more players enter the market after the initial movers are successful. Additionally, the promise of providing food made from everyday fresh produce sometimes results in wastage of raw materials on a daily basis, which if not checked can lead to a large hole in the revenue stream of the business.

The opportunity to laterally branch out in this niche is tremendous. One of the reasons why ABC was successful on college campuses was it provided quick on the go, economical and most importantly, nutritious and healthy food options to busy college students. Demands from busy professionals during lunch hours are somewhat similar, which is why opening outlets in busy downtown areas can help in growing in this niche.

Furthermore, there is a tremendous opportunity to partner up with animal rights and vegan/organic food advocacy groups, to further consolidate ABC’s brand image as a truly considerate and ethical brand.

Threats: The greatest threat that ABC faces is entry of a leaner operation with a more innovative combination and offering. The development of new product offerings in the vegan/organic food game is not an inimitable proposition due to which the barriers to entry in this niche are not very high. With a burgeoning startup scene in the city, and a successful initial business idea already in place, it is only a matter of time a more efficient startup aims to supplant ABC unless ABC is able to stay ahead of the curve with constant innovation and effective brand management.

ABC operates in a niche for the moment. As highlighted in the situational analysis, it is not difficult to improve on the business model and product offering, which is why larger players already in the food business catering to college students (The Starbucks, Dunkin Donuts and the like) are the biggest head on competitors for ABC. With a large corporate setup, such entities are able to enter this niche space by undercutting prices and sustaining short term operating losses. At the same time, the vegan and organic specialty is something which would require these large scale franchises to tweak their business models to compete effectively on quality and perception, which is why ABC is able to handle competition well so far.

ABC has traditionally defined its target market as college students who have strong ethical considerations with regards to animal rights and at the same time are conscious about healthy nutritious options with an eye on economical pricing. ABC has been able to hit all these areas with its pricing strategy (to be covered ahead) and a demonstrably strong affiliation with vegan and organic food trend, leading to a brand image of an overall ethical and nutritious food option.

Now ABC is looking to branch out by targeting young working professionals with similar characteristics as college students with regards to ethical leanings on the issue of animal rights and a preference of quick and healthy food options but with more disposable income. This provides ABC with an opportunity to charge a premium for the outlets it opens in the downtown area to target these professionals.

The following is a description of ABC’s marketing strategy which goes into the elements of its marketing mix. The marketing mix consists of four elements.

Price: ABC is able to price its food options on the basis of value provided to the customers. So, for orders with a greater deal of customization, a certain premium is charged, whereas for standard, off the menu items, standard prices are charged. With plans of expanding into the young professionals’ market, the pricing will be adjusted upwards to capture the higher disposable incomes while providing greater value to this category of customers as well.

Place/Distribution: The placement strategy initially has been to market and sell products off of the outlet’s shelves. In recent months ABC has moved into providing catering services for working lunches and breakfasts, mostly in the downtown area. It has also been providing catering services for corporate treats, student treks and outdoor picnics. ABC has also formed strategic partnerships with small, chic and likeminded coffeehouses to market its range of vegan products (meals and desserts) with these coffeehouses for a certain fixed commission.

Promotion: ABC has been promoting itself, from day one, on social media with primary modes being Facebook and Instagram. Soon after, the website was launched through which the brand story and the underlying business values were promoted. The website hosts a blog that features articles on the benefits of vegan and organic food options by advocacy groups promoting vegan and organic food options. ABC, through a robust social media marketing strategy, has been able to build a community of like-minded people integrated across Facebook and Instagram as well as on the website, which provides a top of mind place to ABC in its targeted market.

Five-Year Sales Growth Projections After starting operations in 2016, ABC raked in almost $57,000 in the first year and by 2018 it has an annual sales standing at $174,420. With plans in 2019 to open an outlet in the downtown area to target young professionals, ABC expects annual growth of 100% with a steady growth of 40% over 2020. In 2021 with franchising kicking in, the growth rate is expected to jump to 70% as ABC goes country-wide. Graphical and tabular representations of these projections are given below. 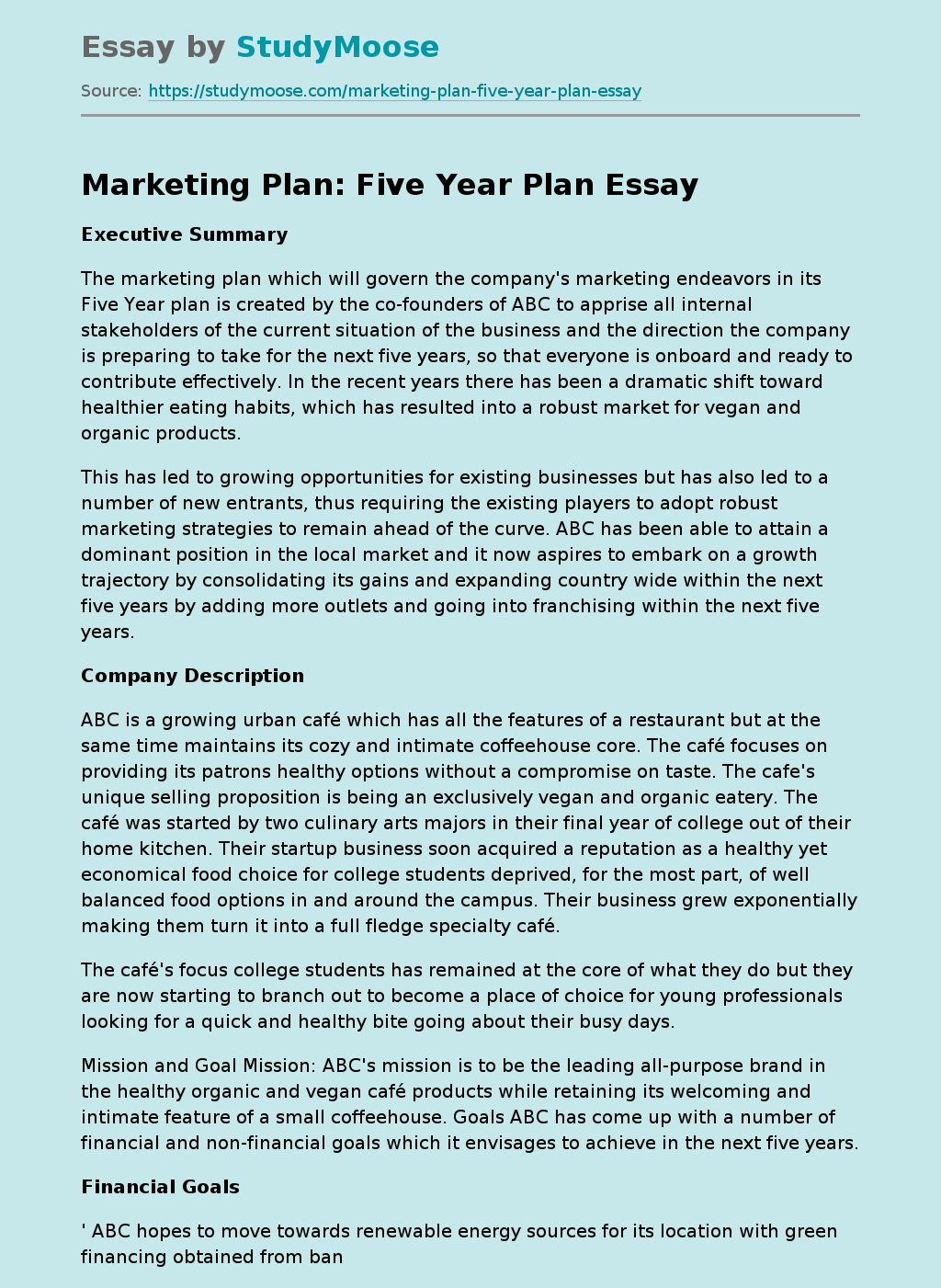