Audi is a German based car manufacturing company, known around the world as part of the big three luxury car manufacturers. Along with Mercedes and BMW, Audi is the biggest luxury car manufacturing company globally. Audi oversees all its global production from its head quarters in Bavaria, Germany, and has further nine production facilities world-wide that manufactures their vehicles. Audi has been a majority owned subsidiary group of Volkswagen since 1966, after a purchase by Daimler-Benz of Audi’s predecessor group Auto Union.

Don't use plagiarized sources. Get your custom essay on
“ Marketing Mix Of Audi ”
Get custom paper
NEW! smart matching with writer

Volkswagen re-launched the Audi brand with the F103 series, and Audi has gone on to carve itself a niche as a quality manufacturer of automobiles, producing aesthetically pleasing designs combined with a satisfying drive and being mechanically reliable as well. Audi has been selling their luxury cars in India since 2004, but in 2007 Audi India was established as a division of Volkswagen Group Sales India, and began to set up long term plans, involving large scale investments, recruitment drives and high quality sales services to meet its goal of becoming the number one luxury car to be driven in India.

Audi is represented in 110 countries world-wide.

Product in the Marketing mix of Audi

In the early 1990s, Audi had some problems with its microprocessors, causing electronic failures that threatened the company’s reputation, especially in the American market. Audi have worked hard to remedy the problems, and their new motor cars today have much less issues with the electronics, as new and improved technology is found. Audi have added to their range and now offer a wider variety of cars, from the A1, through to the company’s venture into the 4×4 market with the Q5 and Q7.

The Audi A4 remains popular, as does the impressive looking Audi TT. As part of the Big Three of car companies in Germany, Audi are one of the top selling luxury sports car brands in the world.

Place in the marketing mix of Audi

Presently, Audi has 28 dealerships across 11 states in India, and in 2010 Audi India reported an increase in sales, compared to the previous year, of 81%. In mid-2014, Audi India will start production of its premium sedan, the A3 at its facility in Aurangabad, and go on to sell it across its dealerships in the country. Although based in Germany, Audi has a world-wide presence, and continues to be a prolific seller of motor cars. The company has set out major plans and investments in markets such as India, to achieve long term goals, and it continues to grow in the Asian countries. Establishing and maintaining a presence through exclusive dealerships and excellent after care services are being used by the company to build on its European reputation. Production numbers for the Audi Company are impressive, with well over a million vehicles being produced in total in 2013.

Promotions in the Marketing mix of Audi

Audi are involved in many sports and sponsorship ventures, such as sponsoring some Italian football teams, and having a permanent feature in Sony’s Playstation Home. Audi manages to keep itself in the public eye without over doing it. Advertised on billboards and in magazines, and with advertisements on television (TV commercials) over the years, the company was famous for its slogan “Vorsprung durch Technik” meaning progress through technology and today still uses the same words on its adverts.

Recently, it was changed, in the USA only, to ‘truth in engineering’. Audi relies on the quality of its cars, as well as its reputation as one of the Big Three, to ensure that sales and production figures continue to grow. Its cars in India are often launched by celebrities like the recent launch of Audi RS 7 Sports coupe was done by Bollywood biggie Salman Khan. Because of its niche market, Audi never takes part in mass marketing but instead advertises only in the very premium segment so that it can pull its target market towards the brand.

Price in the Marketing mix of Audi

The cost of a new Audi A1 in the UK is around 14,000 GBP and in India it is around 19 lac rupees, which shows that Audi has premium pricing or skimming price. Off course, the pricing is completely justified looking at the quality and the brand image of the car. This pricing is also necessary for the proper positioning of the brand. People like the reputation of the company, and this is reflected in the production of this car – 123,000 plus units in 2013. Dealerships and showrooms offer repayment plans allowing a wide variety of people access to the brand.

Of course, Audi has a well respected range of sports cars, such as the Audi TT RS Coupe or the R8 Coupe, but continues to show a steady growth in production of most of its cars over the last 15 years. Audi has witnessed a stellar performance during the last year and the first quarter of 2014 in India. There has been a price rise off late which has been attributed to the increase in the forex rates. However, the company tries its best to rationalize the prices and provide innovative finance options through their own Audi Finance making the purchase attractive. It has it closest competitors in BMW, Volkswagen and Skoda among others. 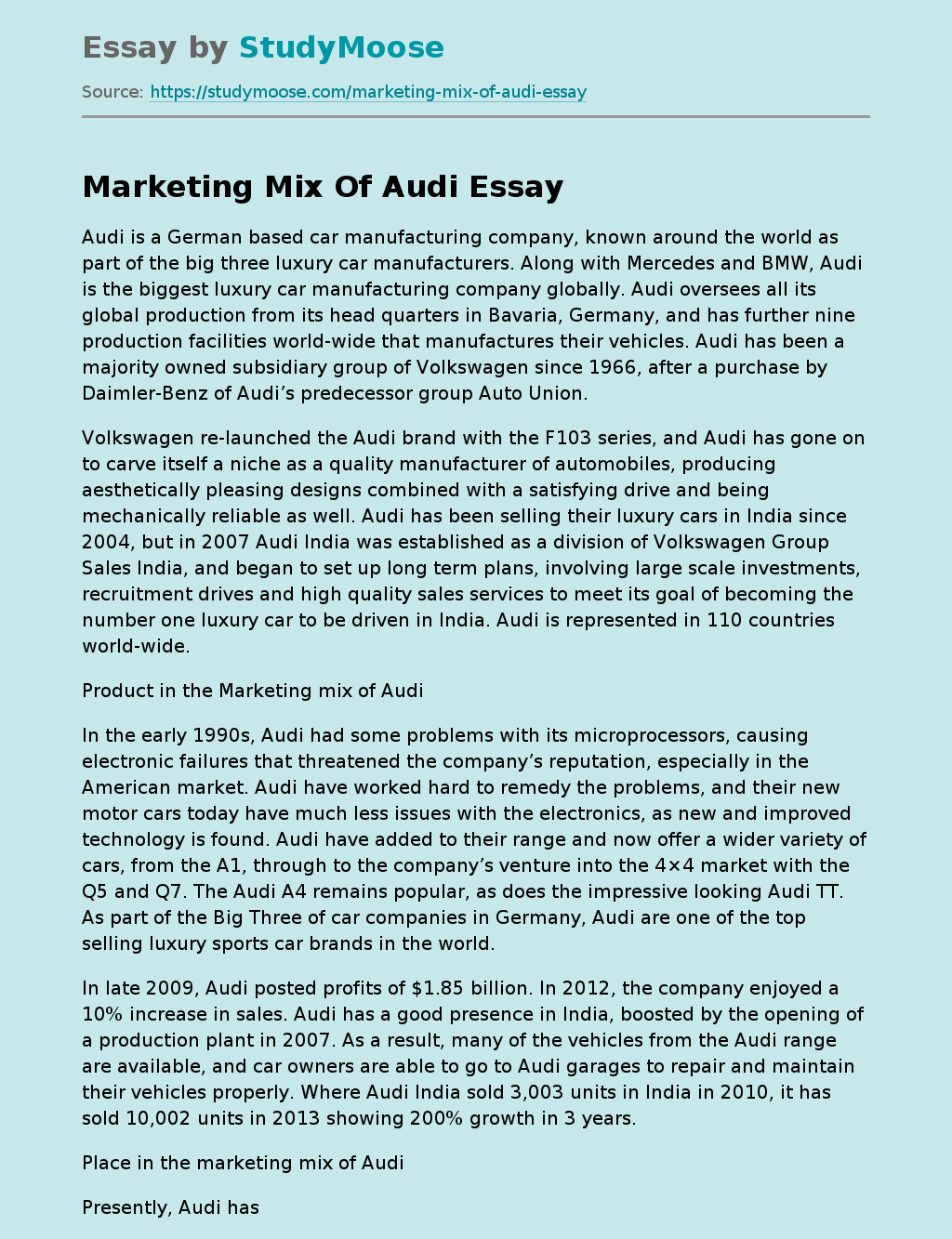