Blizzard Entertainment® is a premier developer and publisher of entertainment software. After establishing the Blizzard label in 1994, the company quickly became one of the most popular and well-respected makers of computer games. By focusing on creating well-designed, highly enjoyable entertainment experiences, Blizzard has maintained an unparalleled reputation for quality since its inception.

Blizzard’s track record of back-to-back number one selling games spans more than a decade, and with blockbuster hits such as World of Warcraft®, Warcraft® III: Reign of Chaos™, Diablo® II, and StarCraft®, the company has earned several consecutive Game of the Year awards.

Don't use plagiarized sources. Get your custom essay on
“ Marketing Analysis of Blizzard Entertainment ”
Get custom paper
NEW! smart matching with writer

In addition, Blizzard’s online-game service, Battle.net®, is one of the largest in the world, with millions of active users.

The high-quality products based on Blizzard’s games have also proven popular and garnered much critical acclaim. These products include action figures, novels, manga, board games, pen-and-paper role-playing games, apparel, and the World of Warcraft Trading Card Game, which is a bestseller in its category.

Extending the reach of its game universes even further, Blizzard is currently at work with Legendary Pictures, the studio behind the feature films Batman Begins, Superman Returns, and 300, on a live-action Warcraft movie.

The reason that the Blizzard became so successful on making games is that the company interacts with the customers.

Firstly, all the staff of Blizzard are the game lovers, they know what is hot, and what the customers want to play and see. This will help the company knows the target market better, also give a direction for gaming development.

For example, in the early 90s, when the real-time strategy games came out, Blizzard launched their Warcraft I, and quickly became popular. After the success of Warcraft I, the company launched Diablo I during the 1998 to 2000, this created the new generation of the third person role-play games, which has copied by other companies in the last ten years.

Secondly, after the Blizzard’s big success of the Diablo and Warcraft, the company still wanted innovating its products and services through analyzing gamers’ information, the survey questions were posted on its homepage and other big software media, such as computer gaming world, PC gamer and computer life. They were hearing from the Diablo and Warcraft fans for their thoughts of developing new games, and what they want the next games to be. Then the glory days of Blizzard has came—— the Starcraft had launched in late 1998, and became the best real-time strategy game in the 19th century, because the game was perfectly balanced for the 3 species battle in the galaxy. Blizzard could not achieve this without analyzing what the customers want and the data which collected from the gamers.

Thirdly, Blizzard is a computer games maker and also providing online gaming servers for the players, such as World of Warcraft and Starcraft. The objective of relationship is more like the cross-selling, once the games are launched by the company; they are going to the market through the dealers such as: Best Buy, Future Shop and also through online shopping, directly from the Blizzard company homepage. Furthermore, Blizzard develops and publishes its own games, then provides them into the market, so they save a lot of avoid selling its games through a publisher like EA Games.

Finally, the Blizzard has achieved its success by connecting with the customers; both analyze the data from customers and hire professional gamers giving ideas for the future development. It became more and more important for the company’s marketing in the nowadays. 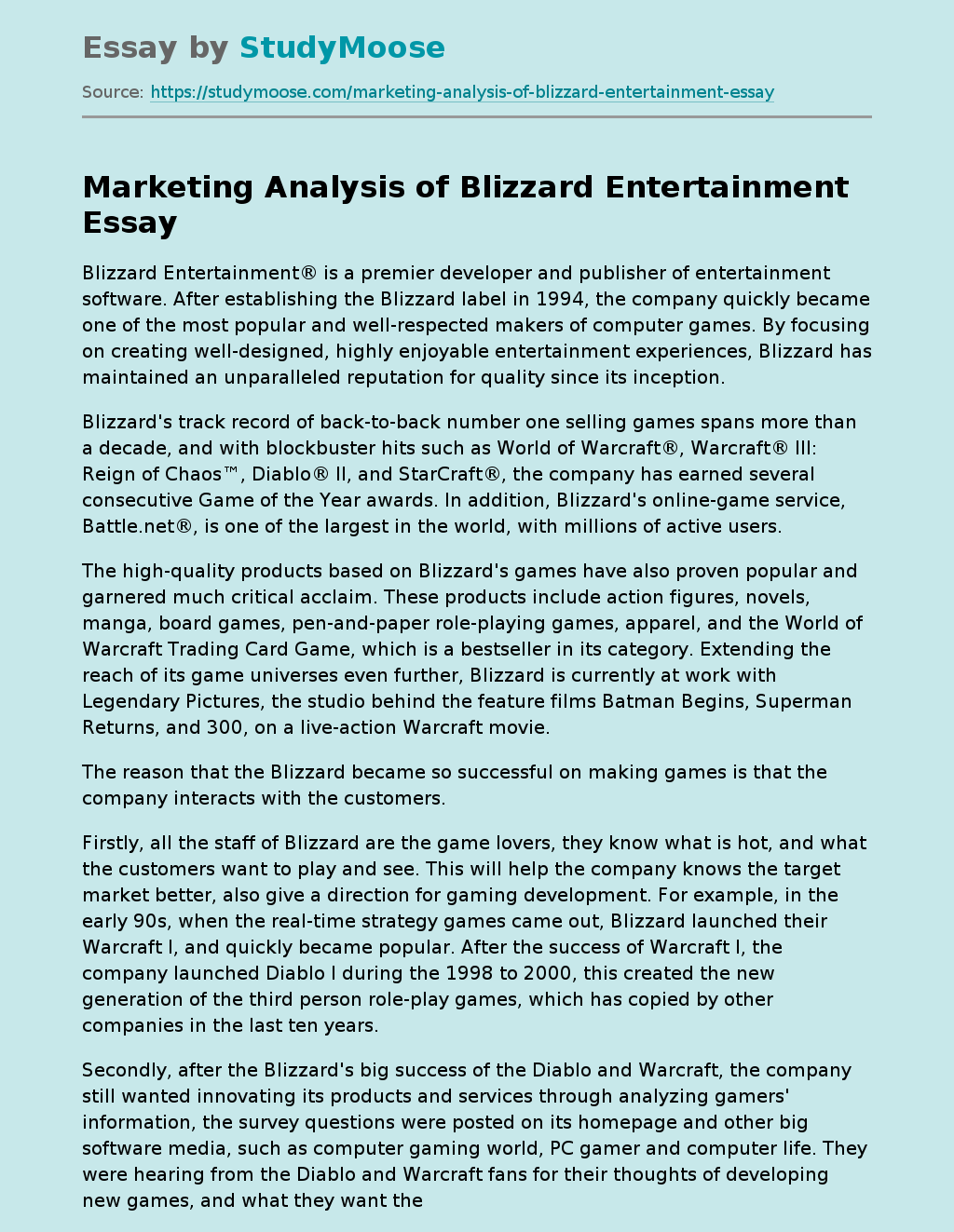