Mark Twain’s Racist Use of Jim

In Mark Twain’s Adventures of Huckleberry Finn, Twain attempts to write an anti-racist novel; however, his intent is not consistent with his writing. He uses the supporting black character, Jim, to further Huck’s maturation and move the narrative’s plot along, rather than giving him any real character development. Although Twain does give Jim some background and depth, he only focuses on Huck’s reaction to it, rather than how it influenced Jim’s life. By ignoring the influence of Jim’s background and trying to use him as a tool to fulfill the plot, Twain writes inconsistencies in his character, hurting Jim’s development in the story.

Don't use plagiarized sources. Get your custom essay on
“ Mark Twain’s Racist Use of Jim ”
Get custom paper
NEW! smart matching with writer

He reaffirms stereotypes through a racist view of Jim’s personality and intelligence. Twain’s supposedly anti-racist novel treats its only main black character as a literary device, not as an actual, rounded character, and while Twain’s message in Adventure’s of Huckleberry Finn is not racist, his application of Jim, as a writer, is.

Throughout Adventures of Huckleberry Finn, Twain gives Jim moments to share his thoughts and feelings and actually develop his character, but Twain puts Jim’s insights in the background, putting the emphasis on Huck’s reaction and maturation. Jim’s character is often reduced to a piece of the puzzle in Huck’s development. For example, when Jim shares a story about his deaf daughter, whom he beats for not understanding what he says, Jim has an emotional breakdown: “‘O de po’ little thing[Jim’s daughter]! de Lord God Amighty forgive po’ ole Jim…O, she was plumb deef and dumb, Huck…en I’d ben a treat’n her so’” (Twain 170).

The purpose for Jim’s moment of vulnerability was not to give him depth, but instead to prove Huck’s assumption that: “he [Jim] cared just as much for his people as white folks”(Twain 170). This piece of Jim’s character is not mentioned again proving that it had no specific purpose for Jim, and was only there to give Huck insight on a black person’s emotional depth. Twain chooses an anti-racist message, but writes it using a black character as nothing more than a tool to do so. In the Phelps farm episode, Jim is not developed at all and instead serves as a prisoner whose only purpose is to sit and be rescued. In other words, Jim is written as an important plot point used to tug Twain’s narrative along. Not only is his role diminished, butJim simply does as he’s told with little to no objection or insight because: “he [Jim] couldn’t see no sense in the most of it, but he allowed we [Huck and Tom] was white folks and knowed better than him, so he was satisfied and said he would do it all just as Tom said” (Twain 256). Twain uses this line to make Jim a puppet; he “[does] it all just as Tom [says]” and has no action of his own. Jim is reduced to a dependent and mindless character, which lessens his impact on the overall story and hurts his character. He becomes a goal or objective that Huck and Tom have to take up and complete. Jim gets stationed in the background of the story, while the main focus becomes solely on the growth of Huck’s character.

Twain also creates inconsistencies in Jim’s character by trying to change him so that he can fulfill multiple purposes in the story. He alters Jim’s nature and personality, so that he can fit into roles and be used get past plot points. In the back end of the Phelps farm chapter, after Jim is freed, he shows no sign of anger or a grudge against Tom for making him go through hell, even though he was already free. Instead he becomes this extremely compliant character who accepts forty dollars from Tom as payment for all his abuse: “Dah now, Huck, what I️ tell you?—what I️ tell you up dah on Jackson islan’?…I️ tole you I️ Ben rich wunst, en I️ gwinter be rich agin” (Twain 294). Twain has already established Jim as not a completely subservient character, but writes him perfectly happy even after Jim knows that Tom put him through all those uncomfortable situations for no justifiable reason. Twain uses Jim as a plug to put into a plot point, which keeps the novel going smoothly, but sacrifices the integrity of Jim’s character. Another inconsistency in Jim’s character is his role in Huck’s life throughout the novel. Earlier in the story, Jim acts as a father figure for Huck, and when Jim and Huck find a dead body on the river, Jim tells Huck: “Come in, Huck, but doan’ look at his face—it’s too gashly” (Twain 62). Jim protects Huck from the dead body, telling him “it’s too gashly,” but in reality, he knows it to be Huck’s father, and looks out for his well-being and mental health. Jim acts as Huck’s protector in the beginning of the book, but by the end of the book Jim is very much Huck’s responsibility. Twain does a complete role change to keep the story flowing. He diminishes Jim’s character in the latter chapters; he falls from this authoritative, fatherly figure to a compliant prisoner that Huck and Tom need to rescue. Jim’s oddities in his personality stem from Twain’s poor use of his character. By changing his character to further the narrative Twain lessens the overall impact and strength of Jim’s disposition.

Mark Twain’s depiction of Jim’s character does not meet his anti-racist polemical intent. Twain depicts Jim as an uneducated (though logically intelligent), gullible oaf, who relies on white people to accomplish anything. He is the epitome of a stereotypical negro character. In the Phelps farm chapters, Huck and Tom free Jim before actually rescuing him in order to move a heavy grind stone into his shack: “We [Huck and Tom] see it warn’t no use, we got to go and fetch Jim. So he [Jim] raised up his bed and slid the chain off his bed-leg…” (Twain 266). Jim helps Huck and Tom push the grind stone through the hole, then he goes back into his shack and remains there. He knows he can get out of his shack whenever he wants simply by “rais[ing] up his bed and slid[ing] the chain off,” but instead he waits for two teenage boys to come to his rescue. Twain writes Jim as a helpless captive who can neither think nor act for himself and portrays Jim as if he is the child, and Huck and Tom are the adults. He helps to reinforce the stereotype that blacks need whites through Jim’s lack of independence. Twain also gives Jim a child-like logic that makes him seem less intelligent and oafish. When Jim and Huck are arguing over King Solomon’s wisdom, Jim is unable to comprehend the metaphors and finer points of the story saying: “‘would a wise man want to live in de mids’ er sich a blimblammin’ all de time? No—‘deed he wouldn’t. A wise man ‘ud take and biler-factry’.” (Twain 87). Jim is unable to grasp the meaning of the story, and can only think of it in literal, modern day terms. By allowing Huck (but not Jim) to understand the fine details and meaning of the story, Twain makes Jim seem less intelligent than a child. Twain reaffirms the stereotype of black unintelligence by portraying Jim as uneducated and foolish.

Mark Twain’s Adventures of Huckleberry Finn was intended to be an anti-racist novel, but it falls short of its goal by using its only significant black character as a tool to develop the story’s plot line and push Huck’s maturation forward. He doesn’t give Jim any real character development, and uses most of his insights as fuel to help Huck develop. Twain even sacrifices the integrity of Jim’s character by creating inconsistencies in his behavior in order to progress the narrative. Lastly, he reenforces stereotypes through a racist depiction of Jim’s personality and overall character. Twain fails his polemical intent of writing an anti-racist novel, and actually writes a novel that reaffirms stereotypes and uses it’s only main black character as a tool.

Mark Twain’s Racist Use of Jim. (2021, Sep 21). Retrieved from https://studymoose.com/mark-twain-s-racist-use-of-jim-essay?post 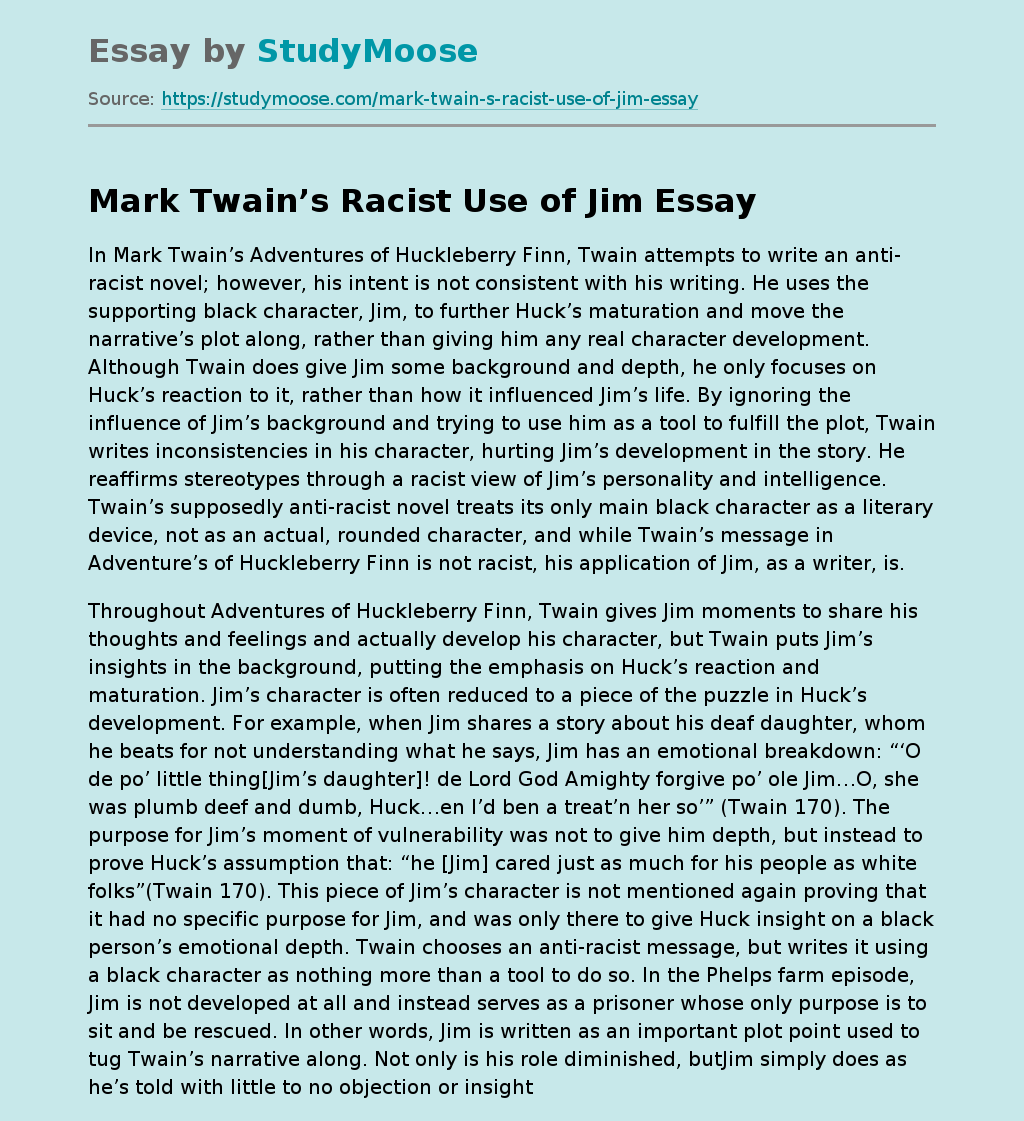