The sample included single, married, widowed and divorced women. The majority were married women, representing 8 followed by widows then single women. The reasons for the predominance of married women in this area are the low rate of school enrolment in rural areas and the custom of early marriage for young girls. This is partly due to the Family Code.

Another explanation for the predominance of married women in this area could be the constraints of marriage, which mean that a wife has to stay at her husband’s side, whereas many unmarried girls had the opportunity to leave the rural areas to find refuge in urban centres long before the violence became rife.

Don't use plagiarized sources. Get your custom essay on
“ Marital Status ”
Get custom paper
NEW! smart matching with writer

Almost all the widows in the sample said that their husbands had died during the past years of brutal conflict, leaving them completely responsible for their family. Among the single women, some of the rape victims were under 19 years of age, so they were still expecting to be married.

9% of the sample. This is not surprising, as girls living in rural areas in the DRC generally get very little education. According to national public health surveys carried out by UNICEF in 2001, 49 the illiteracy rate among Congolese women is 46%. The literacy rate is even lower in rural areas and the longer the distance from towns, the less schooling children have. Many of the women were farmers and their tasks include cultivating the fields (ploughing, hoeing and sowing), harvesting, gathering firewood for cooking and fetching water: They made up 76% of the sample.

Unemployed women accounted for 9. 6% and school pupils or students 7. 1%. Since most of these activities are carried out in relatively isolated places, the women are exposed to assaults of all kinds by the combatants who, when they are not looting houses, roamed the fields in search of agricultural produce for their own consumption. Four have responded in French, four have conversed in French which being their mother tongue and seven in regional mother tongue the Lingala. Religious backgrounds are Animist, Roman Catholic, Christian, kibanguiste….

These victims live actually in refugee centre, relatives and parent. The instrument of personal interviews was chosen for collecting data. The aim of using instrument was to understand, rather than explain or predict the cause or effect of the violence against women and girl and the behaviour of the predictors of sexual violence against women. Data that emerged from the interviews is of qualitative in nature, this made it difficult to analyse and interpret. In addition some people spoke more or some spoke less, so data collected is not uniform.

The interview require translator from mother tongue (Lingala….. ) to French and writing in English. I hope the analysis will offer an understanding of violence against women in conflict objectivity, which is rooted in cultural specificities of how gender and sexual men supremacies and pagan ritual, tradition and customs are engaged with in DRC. Being African and having western influences of feminism, human right and sexual identity politics, I come with a perspective that may impact on questions framed and interpretation and translation of narrative.

I hope that my African roots and education in African cultural context has yielded a sensibility to the people I am interviewing, so that despite these influences, the interpretation will not be biased. Personal interview allowed me to pick up threads and take it in a variety of directions which a questionnaire would not have granted. The venue of each interview was arranged according to the convenience of respondents. Availability of space was not difficult. Further, it was crucial to ensure privacy for the respondents.

Using the instrument of in person interview presented some limitations, the foremost being time constraint especially on psychological trauma respondents. It would have been ideal if longer periods of time could have been spent with respondents to get a sense of their lives across a span of social locations. Some victims who have attended the interview but could not speak because of their traumatic situation. Language was an additional constraint. Questions had to be rephrased, without being leading or closed, before eliciting responses relating to question. Some concepts were difficult because of the translation.

Being enabled to speak the language of some respondents meant that I was unable to pick up on finer details of their responses. The DRC speak French, translation during the interview took some time and writing from French to English took additional time. Then, sometimes, the translations was truncated or in broad sweeps of the response. Another limitation was insufficient field-testing of the instrument. I began this study with the help and support of UNFPA (United Nations Population Fund) which worked with victims across the country in Democratic Republic of Congo (DRC).

I did change my draft proposal twice and my dissertation outline because of the different field reality I encountered during my data collection in DRC. I did not anticipate difficulty in finding a sample of violence against women and girl. On approval from the University Ethics Committee, I developed an outline stating the aim of the study, my approach to interviewing and areas of enquiry. I sent this to UNFPA overseas agency in DRC. In Kinshasa, I visited the Sociology and Anthropology Department where I met two professors to discuss women issue in DRC.

The aims and significance of the study were explained to the participants before the interviews . The principle of voluntary participation was therefore applied, and it was made clear at the start of each interview that anonymity and confidentiality were guaranteed. The informants were also told that a tape recorder would be used, so that their replies could be accurately recorded and then written down. The tapes were erased after the data had been analysed. 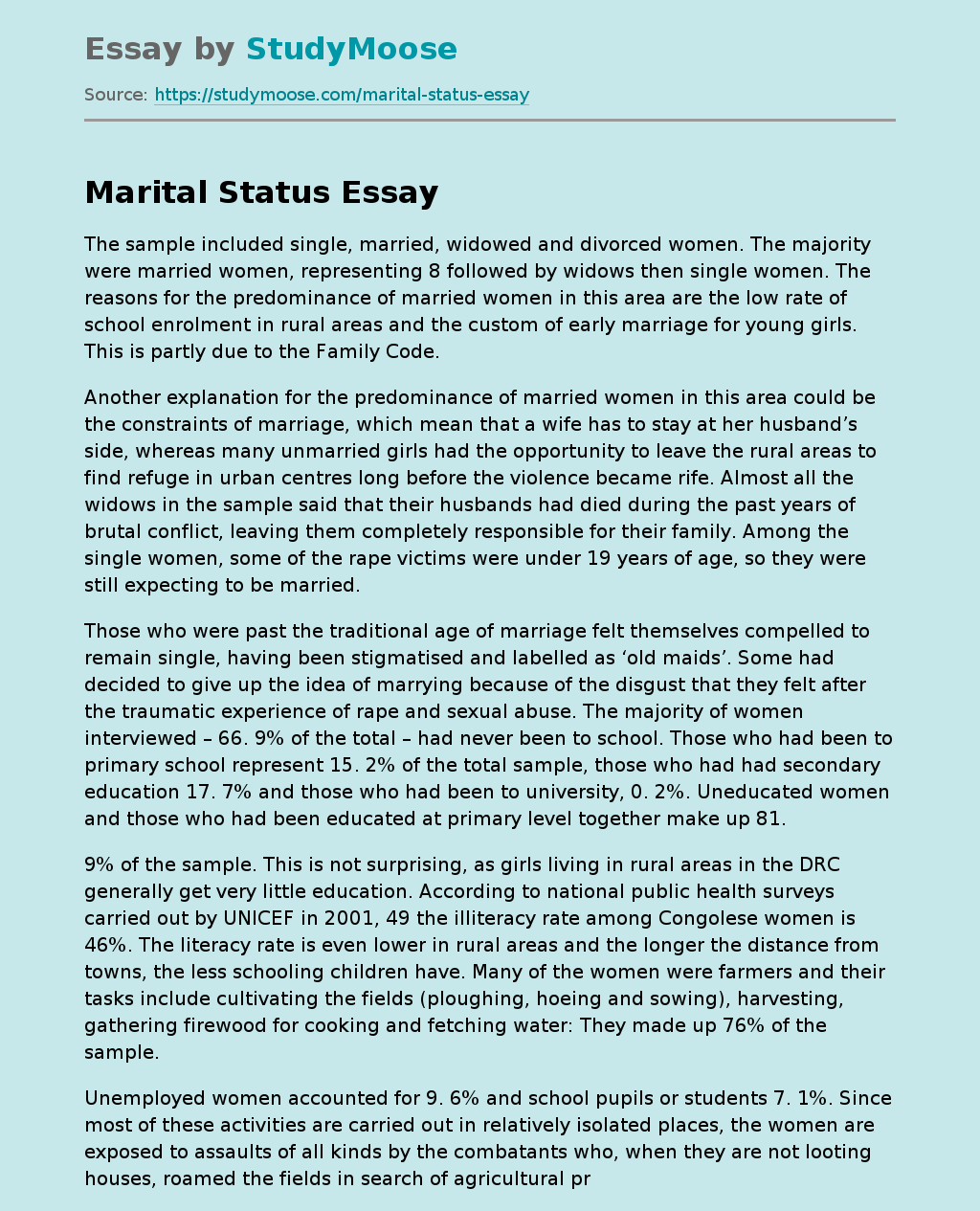