Marine pollution is a serious environmental, and economical problem; its tentacleshave reached to the whole depth of our blue planet; from the green swamps of the amazon, tothe buried caves i n the oceans (UNEP 2005b, UNEP 2006a).These marine debris have altered the ecosystem dynamics for us;humans and for the whole environment. Marine pollution,according to UN definition, is the introduction of substances orenergy to marine environment by human, which results indeleterious effects. The issue of marine pollution has beenchasing scientists and environmentalists for a long history.

Don't use plagiarized sources. Get your custom essay on
“ Marine pollution is a serious environmental and economical problem its tentacleshave reached ”
Get custom paper
NEW! smart matching with writer

Mostscientists believed that oceans are not affected by this kind ofpollution because oceans are pretty big, hence they thought thatwe have unlimited ability to dilute the oceans, and they took itfor granted; no matter how much chemicals and waste We throw,nothing would happen. The real pursuits for resolving the issuesof marine pollution became moved to the spotlight in thebeginning of 1950s. One of the most alarming threats tour oceanhappens to be the land based wastes, which we are going to beconcerned with on this short article.

Land based wastes, mildly put, are the wastes from land whether brought by rivers inrun offs or dumped directly into coastal waters. Most of the wastes we produce on landreaches the ocean, thus more than 80% of marine pollution come from that. The majority ofmarine pollutants come from land based activities such as inflow or discharge of chemicals,solid wastes, industrial and agricultural effluents, sediments, and oil. Air pollution alsocontributes; air carrying dust and pesticides from farms into the marine environments.

Landbased wastes have proven to be harmful to marine life and its habitats.Marine pollution poses one of the most severe threats to the sustainability of thenatural resources of sensitive habitats and wildlife and people ofthe region (UNEP 2008). The quantity of waste is linked to theeconomic state in the country according to the CaribbeanCommunity Secretariat (2003). Wealthier countries produce morewaste than others do. Population growth, lack of land areas, thegrowing tourism activities, and the increase importation ofhazardous substances all contribute. People generate a lot of solidwaste such as bottles, papers, glass, metal, plastic containers, foodand kitchen wastes, bricks, tiles, rubbers, and hazardous wastesuch as batteries, paints, chemicals … Etc. If all of these wastes are not recycled or disposedproperly, they will wind up in the oceans. Eight million items of various types and geometry aredumped every day and five million of them from ships. According to Moore (2002), the amountof plastic pieces in the Pacific has tripled in the last ten years.Solid waste can destroy habitats of the blue sea: seabed,coral reefs, and see grass bed. Nevertheless, plastic waste canfiguratively choke fish to death. As we saw sperm whale found dead in with 13pounds of plastic in its stomach including 115 drinking cups, 25 plastic bags, 2flip flops, plastic bottles, and a bag containing more than 1,000 pieces of string.Sperm whales feed on shrimp, fish, crabs, and small sharks and they are listedunder endangered species. Sea turtles mistake plastic bags for jellyfish and diefrom internal blockages. Solid waste also destroy the beauty of our coasts.Second source of land based waste is oil leakage andspills. Oil spills is the release of liquid petroleum intothe marine environment due to human activities;causing a huge damage to marine environment. It maybe the release of crude oil from offshore platforms andtankers. It also may be the released petroleum productssuch as gasoline and diesel from large ships such asbunker fuel. Because of the density of the oil, it floatson the surface of water, spread out and pushed bywinds and currents. Spilled oil affects the near surfacecreatures such as sea birds, jellyfish, and planktons.When birds float on water surface, oil destroys theinsulating ability of their feathers or fur, thus exposedto harsh elements. They may be poisoned, whilstcleaning themselves from oil. When shellfish and fishexposed to oil, they experience reduced growth,changes in heart and respiration rates, enlarged livers,fin erosion, and reproduction impairment, it also affectseggs and the survival of larval.There are marine mammals like seals, whales, or porpoises needto surface to breathe. Then, they become oiled, and this Irritatetheir eyes or skin, or they may breathe in harmful oil fumes. Sealsand sea lions are especially at risk of oiling when their haul out orpupping areas have been oiled.Fertilizers are the third source of land based waste. Fertilizers cause a huge problem in coastalareas; when they runoff from farms. Fertilizersare toxic and create undesirable organic reactionsthat affects the marine environment. Once theyreach the ocean, the nutrients- Including highlevels of nitrogen- are released into water. Thehigh level nutrients helping algae growth. Somealgae species explode in growth and then itreleases harmful toxins. In normal levels, theyproduce these toxins but in a level that is notmuch harmful to marine life. These toxins poisonother types of marine life. Moreover, some areasmay become dead spot that is no longer have normal marine life in it. In addition the huge amountof algae use oxygen to survive and then increase the oxygen demand in water, thus affecting othertypes of marine life and leading them to die due to lack of oxygen.Sewage disposal is one of the causes of marine pollution. Sewage originates primarilyfrom domestic, commercial, and industrial sources. Disposal ofbio- solids, a semisolid byproduct of the sewage treatmentprocess, often called sludge. Sewage, even if it was partiallytreated or untreated, brings high microbe concentrations into theocean. Human diseases can be caused by waterborne pathogensthat contact the skin or eyes; waterborne pathogens that areaccidentally ingested when water is swallowed, or foodbornepathogens found in the tissues of fish and shellfish consumed asseafood. Beach pollution is public health problem. It may causebeach closings because they find high levels of disease-causing microbes in the water. Sewageoften is responsible for the harmful microbial levels. Seafood contaminated by sewage-relatedpathogens sickens untold numbers of people worldwide.Chemicals also enter the sea from land-based activities. Chemicals can escape into water,soil, and air during their manufacture, use, or disposal, as well as from accidental leaks or fires inproducts containing these chemicals. Industrial toxic chemicals can adversely affect the growth,reproduction, and development of many marine animals. Once in the environment, they cantravel for long distances in air and water, including ocean currents. In addition to theenvironmental and ecological issues, there is growing concern over the potential human healthimpacts in aboriginal communities whose residents depend on fish and marine mammals for dailysustenance.Heavy metals (e.g., copper, lead, mercury, and arsenic) can reach high levels inside marineanimals, and then be passed along as seafood for humans. A well-known case of humanpoisoning occurred in Japan, where one industry dumped mercury compounds into MinimataBayfrom 1932 to 1968. Methyl mercury that accumulated in fish and other animals was passed alongto humans who consumed them. Over 3,000 human victims and an unknown number of animalssuccumbed to what became known as “Minimata Disease”, a devastating illness that affects thecentral nervous system.

Marine pollution is a serious environmental and economical problem its tentacleshave reached. (2019, Aug 20). Retrieved from https://studymoose.com/marine-pollution-is-a-serious-environmental-and-economical-problem-its-tentacleshave-reached-essay 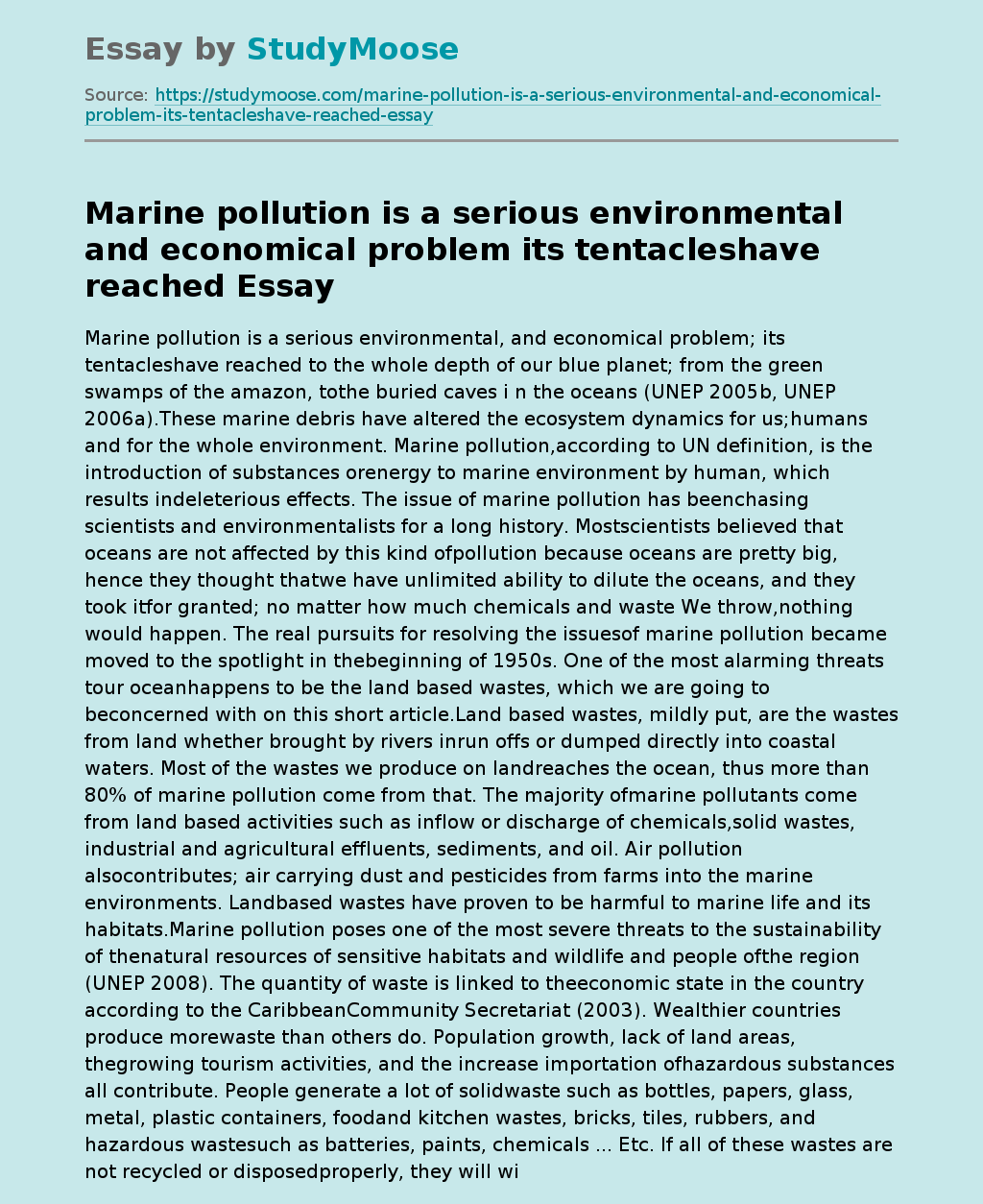