And makes one a bard! —that was the situation in which the lovers, Pierre and Marianne found themselves placed at the altar of love. A novel is the mirror of the feelings of the writer’s mind. One may cleverly try to hide and suppress one’s true feelings by super-imposing imaginings. But the authors are bound to reflect something genuine and special about the author’s private life. George Sand is no exception. George Sand (1804-1876) is the Pseudonym of Amandine-Aurore-Lucile Dupin.

Don't use plagiarized sources. Get your custom essay on
“ Marianne by George Sand ”
Get custom paper
NEW! smart matching with writer

Compared to the period to which she belonged, her thinking was much advanced. She was a French Romantic writer.

She translated fiction-like romances into her actual life. The numerous love-tangles would put any modern socialite into shame. The beginning of most of her love-affairs was at the intellectual level. Perhaps she had experienced every type of love, except true love. Her love-affairs were all motivated for one reason or the other. “Sand’s early writings show the influence of the writers with whom she was associated.

In the 1830s several artists responded to the call of the Comte de Saint-Simon of cure the evils of the new industrial society, among them Franz Listz and Sand who became friends, not lovers.

On a personal level, Michel de Bourges, who preached revolution, was more important for her view of society. After de Bourges, came Pierre Leroux, who was against property and supported the equality of women, and wanted to rehabilitate Satan. ”(George…) In the traditional sense of the term, she lived unhappy married lives.

As for the concerns of her writing, she toyed with many novel ideas, like cure the evils of the new industrial society, preached revolution, equality of women, ideals of Socialism, etc. Marianne…. Marianne is a peculiar character created by George Sand.

She lost her mother at the young age of twenty-two, and if she were an ordinary girl, she would have settled down to marriage. Though many proposals came in her way, George Sand writes, “Marianne, however, had preferred to remain living alone in the country house of her parents had left her. Occupying a secluded position surrounded by hills and woodland some four kilometers outside La Fille-sur-Gouvre, the house was in excellent condition and very adequately furnished within. ”(Sand, 1998, p. 82) The dying declaration is accepted as the true declaration even as evidence in the Court!

George Sand wrote the novella in the year of her death, when she was 72. This is the right age when an individual feels the compulsion to tell the truth about one’s life. The plot of the novella is the same old story. It is between him and her—it is between Adam and Eve! Pure love doesn’t differentiate between young and old. It transcends all artificial barriers. Presently, Pierre arrived as a tutor to impart secular education to a shy but wealthy country girl and promised to select reading material for her. He came as protector of her intellectual garrison, but turned into a true, ardent soldier of love.

Marianne began to respond favorably in this game of the heart. But the role of Pierre must change—from that of parental feelings to a true lover, who must protect the essential independent dignity of the women, which is part of the genuine love! Marianne illustrates Sand’s philosophy about life by being a strong woman, who is not afraid to swim against the social currents relevant to the era to which she belonged. She doesn’t say about the profound philosophy about the woman’s liberation movement etc. She candidly illustrates a beautiful, soul-stirring love affair transcending age.

She cuts across the defined barriers of the society, and beats the conventions. The situation is described with great restraint, without the traces of rebellion. It is molded as an affair between the two intellectual equals. A cursory glance of some of the comments about the personality of George Sand makes an interesting and objective reading! One sees the reflection of Marianne, in those observations: “She was a thinking bosom and one who overpowered her young lovers…”,”What a brave man she was, and what a good woman. ”,”The most womanly woman,” etc.

Marianne, like Sand was a bold individual from the beginning. Marianne, though denied the family support at the very young age, did not rush to marriage, to secure herself. Instead, she decided to face the life squarely and live the life of her choice. So is the case with George Sand, though her familial problems were somewhat different. The very fact that she was able to carry on with so many love affairs, and yet live up to the age of seventy-two to have a go at one more affair, speaks about her relentless grit and determination to do what she considered right in the circumstances then prevailing in her life.

“I am by nature poetic and lot legislative, war-like if necessary, but never parliamentary,” she had written in the late 1830. ” Conclusion: The novella is autobiographical, in many of its characteristics. With all the adventures in her life, George Sand was a private person. Hence her description about Marianne that peoples around her thought her to be a ‘difficult’ individual given to eccentricity is to highlight her own self. Sand says, the village community thought strangely about such individuals.

So also, the literary world and the Society was not kind to George Sand. At the beginning of the story, Pierre was nearing forty. By that age, his enthusiasm about life and living had waned. By the age of forty, George Sand also suffered many a setbacks and was frustrated in her private life. At the young age, every individual possesses high-pitched ambitions. But time tames one with ups and downs, trials and tribulations. Destiny plays its own part. To have talents is one thing.

To get fame and public recognition for the talents is altogether a different issue. Many extraneous factors like patronage, protection count. Also, one needs to have the guts to make the right moves at the right time. On this aspect, the lives of Marianne and George Sand have much in common. To write about such a romance and to experience one in the nineteenth century is great. The comparable life of a Hollywood actress makes kindergarten stuff! She could visualize the modern feminist twist, in the life of Marianne, ipso facto, her own life!

She also takes the potshots at the French politics of the era—how it was not possible for a young, talented and ambitious youth to come up in life, without the necessary backup! Was she not complaining about the treatment meted out to her by the Society? 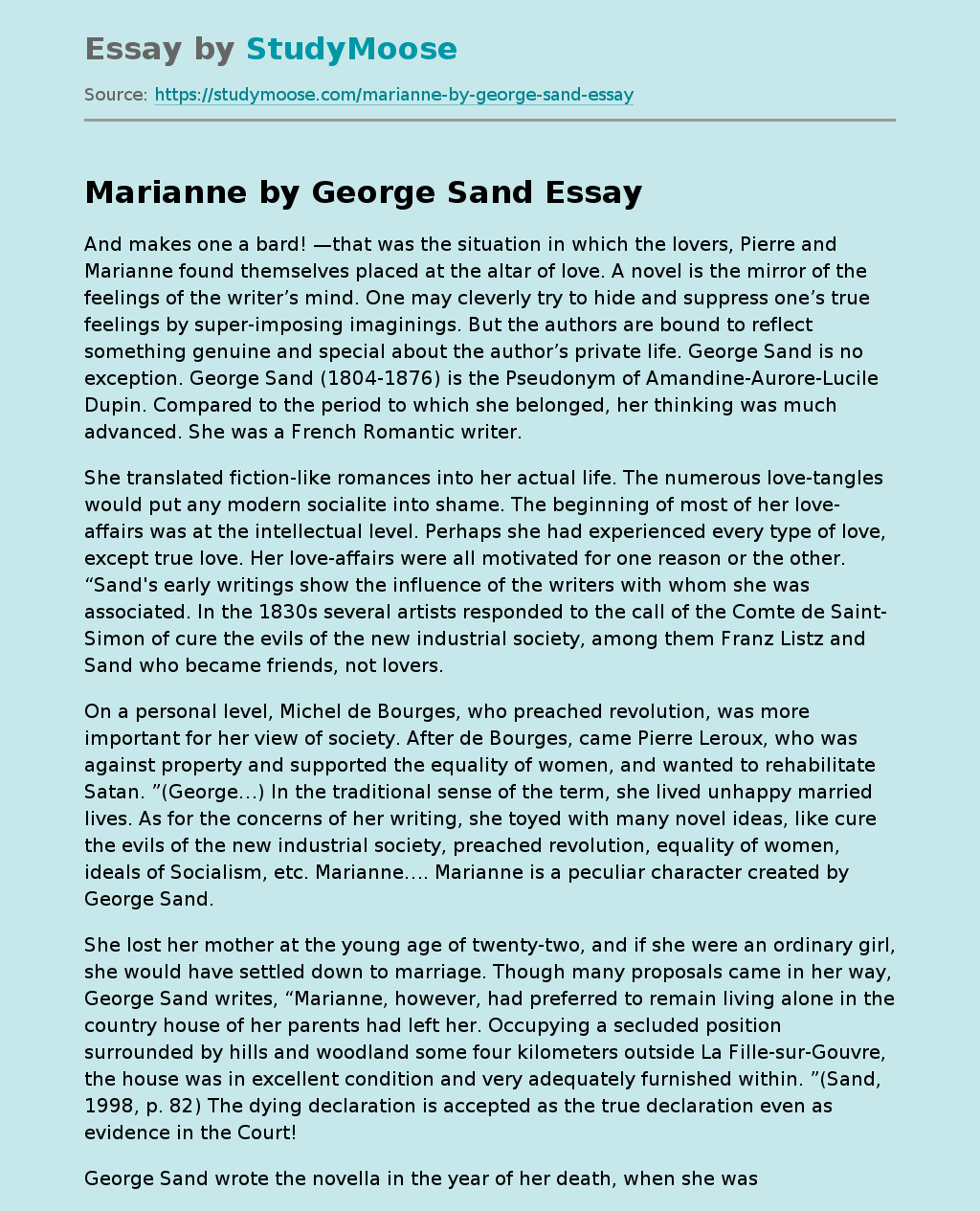