Marbury v. Madison and the Concept of Judicial Deference

In 1803, a judicial review was established. There was a reason why it was made. The case that was called Marbury vs Madison was a case that inspired the supreme court to make the judicial review.

Don't use plagiarized sources. Get your custom essay on
“ Marbury v. Madison and the Concept of Judicial Deference ”
Get custom paper
NEW! smart matching with writer

When the case started, John Marshall was really happy that for the first time ever he could use the judicial review. The Marbury vs Madison case was about four commissions that weren’t sent to something that really important to the other side of the war. Marbury was furious of the four men who were withheld and sued the secretary of state, James Madison. Knowing that both were really high in the government, we knew that it was going to be a tough case.

The only reason the whole case started was because of Thomas Jefferson. Even though Marbury didn’t know, he blamed James Madison for the whole thing. James Madison knowing about what Thomas Jefferson did, defended Jefferson and giving many reasons why the constitution didn’t need this. It felt like James Madison put himself in Thomas Jefferson’s shoes and already knew what to say.  James and Thomas were the ones who had won the case. The two pointed out various facts that even Marbury was shocked and getting nervous.

Madison was able to defeat both at many times, but it wasn’t enough to beat the two. Marbury was furious that he lost the court and the money he used to sue them.

There is no information on how Marbury was punished. Most people were executed but I’m going to leave that as that. A week after the case, the Judicial review was released by John Marshall. It wasn’t only used on cases, but on a few presidents. The judicial review would judge the president on how they helped or saved the government. George Washington had the most points out of 20 out of all the presidents.

The case was known as a precedent. It made a debate on how much power the government actually had. After the case, the debate of power was stronger than before. This debate was held for more than two centuries. Even to this day, the issue has not been resolved. Most people think this happened because the case was held mostly around republicans. Who knows if this problem will ever be solved?  Marbury vs Madison was a very high-profile case. It made the judicial review and was the first case ever to use the judicial review. Even though the judicial review wasn’t invented or even existed, the case had a big impact on it. The case was against two people who were high in the supreme court.

This case did many events that led to what is our today. No one will ever find out if the balance of power of debate will ever end. If it weren’t for that case, we wouldn’t have the judicial review. Who knows what our today would be without that day happening. People may overlook this event, but most of us appreciate it.

Marbury v. Madison and the Concept of Judicial Deference. (2021, Mar 05). Retrieved from https://studymoose.com/marbury-v-madison-and-the-concept-of-judicial-deference-essay 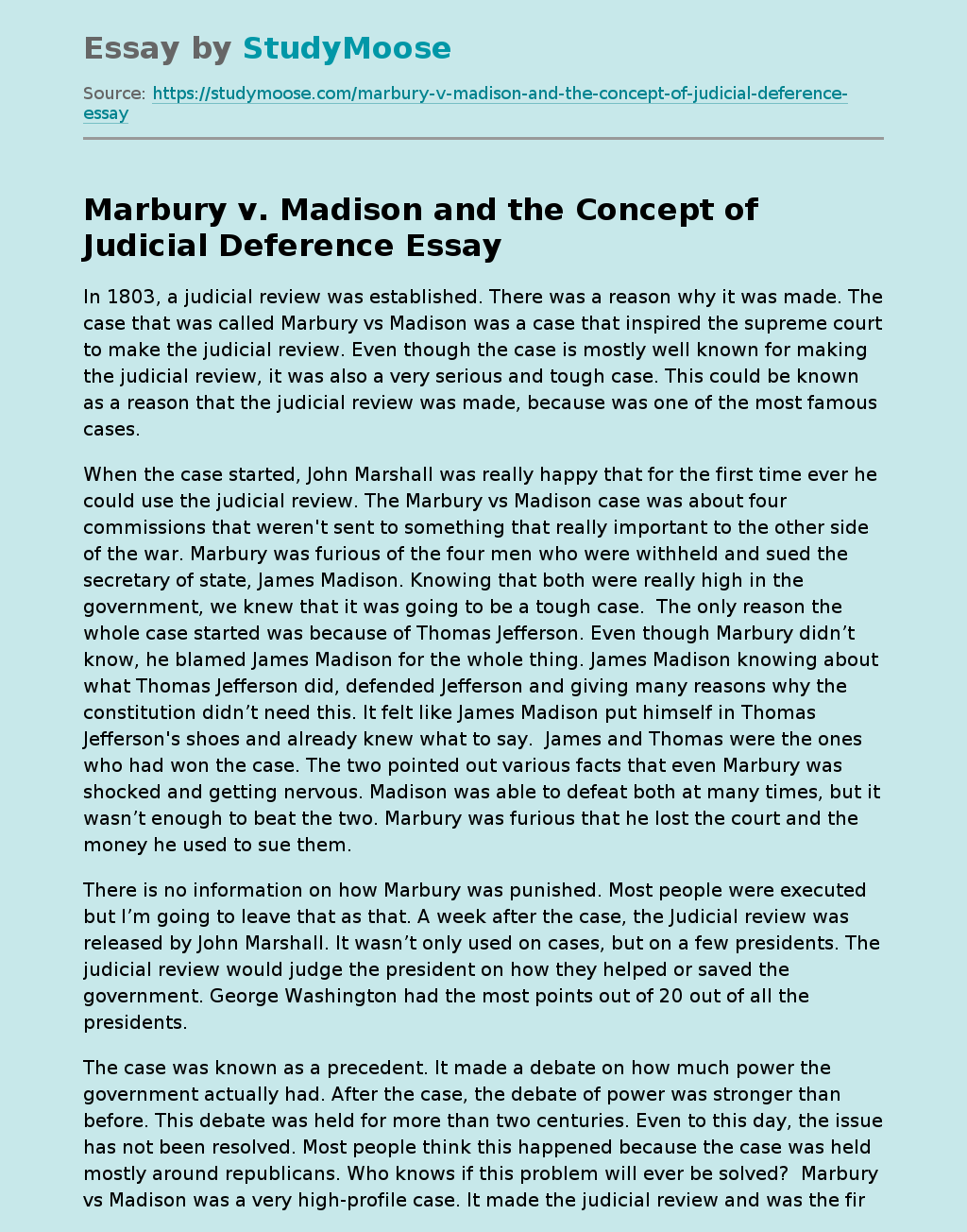