Many Rumors About Gatsby

Don't use plagiarized sources. Get your custom essay on
“ Many Rumors About Gatsby ”
Get custom paper
NEW! smart matching with writer

Also, having goals for yourself and accomplished them for a better life. In the novel The Great Gatsby the American dream is represented differently because of there social class, time period and their characters. Mr. Wilson looks at the American dream as just having a stable job, and a healthy family and his fine with it. We can see this in The Great Gatsby when they are describing Mr.

Wilson (George) “He was a blonde, spiritless man, anemic, and faintly handsome. When he saw us a damp gleam of hope sprang into his light blue eyes” (25).

I think Nick is trying to say when he describes Mr. Wilsons eye the desire of hope that he has of thinking one day Tom well sell him the car but in reality, Tom just wanted to see Myrle. Fitzgerald is trying to show the fact that Mr. Wilson is very hopeful and never gives up.

On the other hand, Tom is like everyone sees the American dream, wealthy, had a stable job, no need in the world, handsome and most of all new opportunity. We can see this once again in the novel. “Anything can happen now that we’ve slid over this bridge,’ I thought; ‘anything at all. . ..’ Even Gatsby could happen, without any particular wonder” (73). I think this significance opportunity and money anyone can have if they work on it. I think Nick is saying they are in a place where opportunity happens, and anything can happen. Over all Tom and Gorge have different views because of their social classes.

What are the class structures? In the United states w have six types of classes. The upper class, new money, middle class, working class, working poor and Poverty level. In the book we can see that we have four out of the six. The upper class in the novel is Tom and Daisy. When Nick and Daisy reunite after a long time at Daisy island home at the begging of the book. Daisy tells Nick, “You see I think everything’s terrible anyhow, she went on . . . “Everybody thinks so the most advanced people. And I know. I’ve been everywhere and seen everything and done everything . . . Sophisticate God, I’m sophisticated” (22). I think Daisy is trying to say that she has an ironic point of view. And it’s common for the upper class to do so.

The new money in the novel is Jay Gatsby. There where many rumors about Gatsby and how he got his money. Gatsby inherited money and then lost most of it. “I thought you inherited your money”. “I did, old sport”. He said automatically, “but I lost most of it in the big panic- the panic of the war” (110). There are some evidences that Gatsby was a bootlegger in the book. “He and this Wolfsheim bought up lot of side-street drug- store here and in Chicago and sold grain alcohol over the counter. That’s one of his little stunts. I picked him for a bootlegger the first time I saw him saw him” (284-285) I also found this quote, ‘He’s a bootlegger,’ said the young ladies, moving somewhere between his cocktails and his flowers” (65). Gatsby did this because he wanted to become something of himself, so he can win over Daisy.

This explains that he wanted to do whatever it took to get back with her. The working class in the book is Nick. Although Daisy and Nick are cousins. Nick still works for his money selling bonds. He has a solid income and a stable job in the finance sector. George and Myrtle fall into the working poor social structures. They have poor financial stability and George had a relatively income. Myrtle is restricted to what Nick describes as the valley of ashes. Because of their financial position. As you can see the social structures play an important role in the novel the Great Gatsby.

Can someone that is poor become rich? Yes, they can! For an example look at The Great Gatsby, Gatsby was born poor to unsuccessful farmers in North Dakota. At 17 Gatsby left with Dan Cody and never wondered or looked back at his passed ounces he became rich. “His parents were shiftless and unsuccessful farm people- his imagination had never really accepted them as his parents at all” (104). This means that Jay Gatsby may be a deception in the eyes of the west egg. But in reality, his just can’t find himself. Although he lost most of Dan Cody’s fortune to his wife. Gatsby used what he learned of wealthy society to become rich. When Gatsby went to war he came back expecting to come back to Daisy, Daisy was already married to Tom. So, he used money to become rich to win over Daisy. He became rich and throw parties hoping one day Daisy well come to them. “they’re such beautiful shirts. It’s makes me sad because I’ve never seen such beautiful shirts before (59). At this point in the book this is the first time that Daisy had come over to Gatsby mansion. By the time they get to his room she is so overwhelm by the man he had become, and his new wealth, that she just stared to cry. Gatsby was a young boy that used his education to become rich.

In conclusion, the American dream was often brought up in the book because they were never happy for what they had, they always wanted more. Social class was something that made people who they were. They really did show their true colors. At the end of the book Gatsby showed his felling and who he was as a person, although he did lie he wasn’t really good at it. The working poor did get above from all the class structures. Revering to Gatsby he did have lot of money really didn’t care about it, all he wanted was Daisy to be with him again.

Many Rumors About Gatsby. (2021, Aug 09). Retrieved from https://studymoose.com/many-rumors-about-gatsby-essay?post 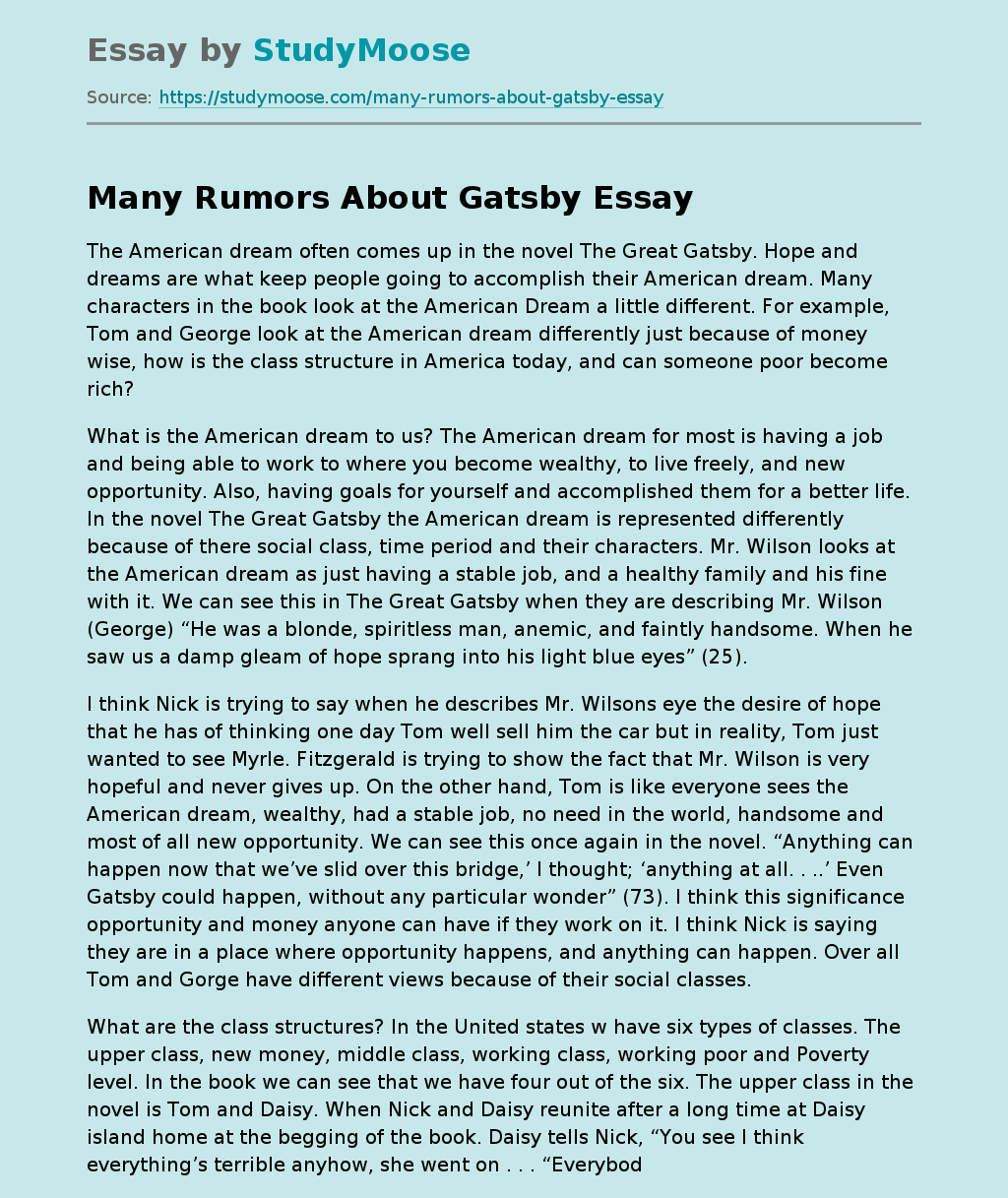