Man’s basis need is to survive and thrive. This is such because he loves himself. This love for himself is makes him selfish and selfishness makes him evil. There is no one in this world that doesn’t love himself. This love for himself makes him put his needs over everything else. Putting one’s needs over other and not being considerate towards others and harming them for own advantage is evil. There was millions of ways to show how men are evil.

Don't use plagiarized sources.
Get Your Custom Essay on Man’s Nature is Evil – Hsun Tzuu Just from $13,9/Page

To begin with there are numerous accounts where men led wars against other countries, destroyed property. In the name of conquering their land they have taken innocent lives all for their own interest. They try to justify the wars by saying it’s to solve a certain issue but there’s no way war is a solution to any problem. Men have cheated and robbed others in the name of trade and commerce. The biggest example is “Capitalism” which makes rich people richer and poor people constantly poorer.

Governments all around the world have invented laws and regulations to subjugate people. It is invented to protect the rich and powerful from the poor and unfortunate people so that they can’t come back and reclaim their stolen rights. The rich and powerful are always going to look down upon the poor people. If the poor people are given a chance they’ll surely rob the rich people of their assets and do exactly what the rich people did to them. There’s no mercy no forgiveness neither there is any love and spirit of brotherhood among men. All these injustice, fighting, wars, deception and lies everything proves that man’s basic nature is evil.

Hsun Tzu says man’s true nature is evil and goodness comes out as a result of his conscience activity, which is absolutely true. There are practical and true arguments that he made in his essay where he depicts his man’s true form of wickedness. First of all if a man is not evil then he wouldn’t need any teacher or guidance to be a good person or to do good things yet he needs to be constantly guided by principles and instructions to become better. If a man is originally good in his true nature then there is no way that he can get derailed from his true nature. But as soon as his born he is more driven towards all the wrongdoings so his nature can be originally pure and good. Being respectful towards their elders and being careful towards their children is what a man is supposed to do. They are not going to eat until the elders have eaten or not going to rest until they will demand rest until they have provided for their elders and children but all these go against their true emotions. If they were originally good in nature then man would have been naturally respectful to others therefore his nature is what we call the opposite of good

. A man is fond of beautiful sights, sound and taste. Seeking the beauty to please him is his true nature. He admires the outer beauty rather than the beauty hidden inside. He loves the beautiful exterior rather than looking deep inside somebody. He will never like person with an ugly face; will never chose something with a bad taste and smell even if it’s a medicine. This exemplifies his evil and vague nature. If a man’s nature was originally good then the sage kings who invented ritual principles out of their conscience activity would have never had to make them. Man would do good things and make just decisions without the sage king’s inventing the ritual principles. All the arguments that Hsun Tzu makes here have supported my views about man’s nature being evil. He has reassured my understandings about man’s true nature. If mankind is left free to indulge in his true passion this world will soon fall into chaos and turmoil. There will be no peace no concord no harmony no amity. We will die of injustice and our own passion of wickedness. This is why we need the precious ritual principles so that we can survive and let other live. With the above being discussed it is appropriate to say that man’s true nature is evil. 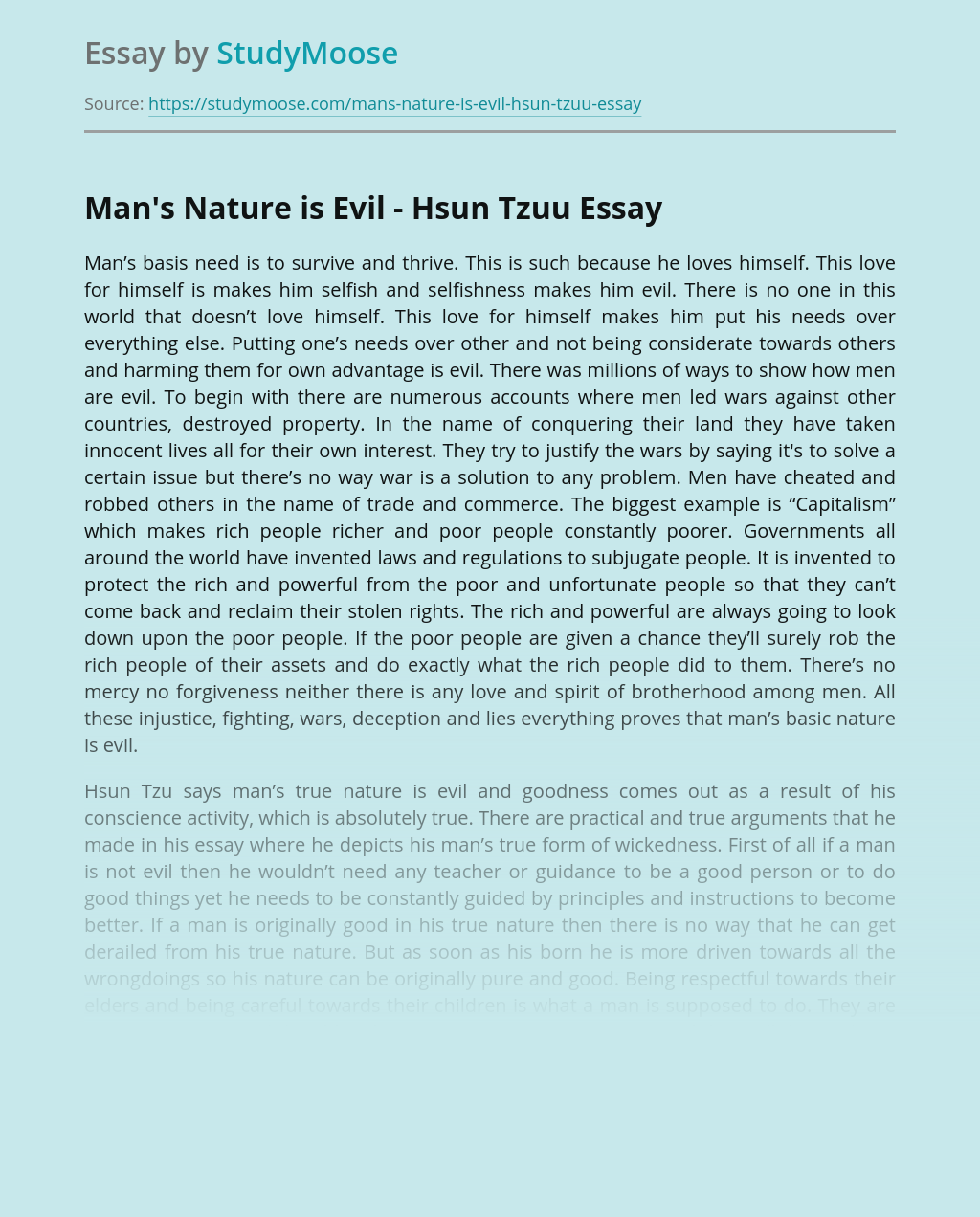 Abstract Evidence has shown that teen homeless across America is ongoing and impacts youth of all cultures and backgrounds. There are millions of youth that are homeless in the United States. The typical ages of homeless youth are eighteen and younger. In America the average youth becomes homeless by age fourteen (www.safehorizon.com). Youth can become... VIEW ESSAY

1 Population development and city problem in Mumbai, India According to G.Tyler( 1994 ), the more bad people move from rural to metropolitan location the more poverty is ending up being urbanized. A lot of cities have damage because of the extreme hardship and social and environment in stead of being centers of commerce and... VIEW ESSAY

Rural-urban linkage generally refers to the growing flow of public and private capital, people (migration and commuting) and goods (trade) between urban and rural areas. It is important to add to these the flow of ideas, the flow of information and diffusion of innovation. Adequate infrastructure such as transportation, communication, energy and basic services is... VIEW ESSAY