Manipur is situated on the North-eastern part of India, and is a part of the seven sister states .Manipur is one of the seven states of Northeast India. The state is bound by Nagaland in the north, by Mizoram in the south, by Assam in the west, and by the borders of the country Burma in the east as well as in the south. The state capital of Manipur is Imphal. The state lies at latitude of 23°83’N – 25°68’N and longitude of 93°03’E – 94°78’E.

Don't use plagiarized sources.
Get Your Custom Essay on Manipur Reasearch paper Just from $13,9/Page

The total area covered by the state is 22,347 km². The capital lies in an oval-shaped valley of approximately 700 square miles (2,000 km2) surrounded by blue mountains and is at an elevation of 790 metres above the sea level. The slope of the valley is from north to south.

The total water resources of Barak and Manipur river basins are about 1.8487 Mham. The overall water balance of the state amounts to 0.7236 The Barak river, the largest river of Manipur, originates in the Manipur Hills and is joined by a number of tributaries such as the Irang, Maku, and Tuivai. The Manipur river basin has eight major rivers: the Manipur, Imphal, Iril, Nambul, Sekmai, thchakpi, Thoubal and Khuga. All these rivers originate from the surrounding hills. These rivers are corrosive in nature and assume turbulent form in the rainy season.

Manipur has a good flora and fauna and is among the most scenic states of India. Blessed with an amazing varieties of flora and fauna ,the hills covered by forests constituting 67% of the geographical area of Manipur, hold the tourist spell bound. Nong_in is the state bird of Manipur .The most unique animal is Sangai-the brow antlered and vegetation on the Loktak Lake sustains small herds of this endemic and threatened cervid in the world. Manipur has two major divisions Imphal and Churachandpur . Imphal is a large city compared to other cities in Manipur. Imphal has a good tourism potential with scenic rivers flowing through its terrain. The tourism department is making efforts to make Imphal exciting and bring in tourists from across the country. Shopping centres are slowly making their way into Imphal. Imphal is also developing on the economic front, with entrepreneurs trying to tap the business potential in Imphal.

The Loktak Lake is a popular floating lake in Imphal, where people come in large numbers to relax on comfortable boat houses. Tourists are bound to be fascinated by the calmness which surrounds the lake, and is a preferred destination for tourists requiring break from their hectic schedule. Churachandpur is another better developed city in Manipur, only second to Imphal.. The town of Churachandpur remains unexploited by tourists, because of the rugged terrain. The town attracted many investors during the late nineteenth century. Tourism in the town hasn’t developed to its potential. A lot of scenic and beautiful locations remain inaccessible, which is a cause of concern for the authorities. Tourists need not be disappointed because these sites are opening up and provide a lot of opportunities for tourists.

The wondrously little Shangrila and “a jewelled land” Manipur is a veritable paradise on earth where mother nature has been extra generous in her bounty. Manipur promises to be the great tourist discovery of the 21st century. With an oval shaped valley surrounded by blue green hills ,rich in arts and tradition it has inspired description such as the “Switzerland of the East’ with tripping rivers ,carpets of flowers ,exotic blooms and lazy lakes. The people and the tribes of Manipur includes Meities ,Nagas and kukis ,chin-Mizo groups and other colourful communities which have lived in complete harmony for centuries.

Manipur is a state which has different culture, when compared to the other parts of India. The people here speak Manipuri and are very warm and friendly towards tourists. Manipur is a mosaic of traditions and cultural patterns .In the field of art and culture.The state is best represented by its classical and folkdance forms. A spring festival ,the “Lai Horaoba” held in April/May is symbolised by a traditional, stylised and ritualistic dance performed for peace and prosperity. Theatre and society in Manipur are intimately linked, as in many parts of the world. Manipuris are a culturally enthusiastic people. Cultural spirit has never been allowed to be blown out despite the area’s remoteness from the outside world. This is why it still thrives in the Manipur valley.

The major tourist attractions in the State, amongst others, are fascinating lakes, breath taking green hills and landscapes, historic monuments. Apart from the above mention tourists attractions of Manipur. The shree shree Govindajee Temple near the old Palace of the Maharaja of Manipur attracts large numbers of pilgrimage tourists.

To find out how the natural beauty of Manipur could become a major attraction for the tourists.

To identify and explore the art and culture of Manipur as an attraction for the tourists. To study the present status of tourism in Manipur.

To find out how tourism can be developed in Manipur.

To identify the obstacles in tourism development.

To propose a plan to develop and improve tourism infrastructure in the state, along with a marketing strategy.

1. I will be collecting information through a questionnaire.

12. In your opinion what steps should be taken up to attract the tourists in visiting Manipur.

a) Improvement of infrastructure
b) Better publicity and marketing of Manipur tourism
c) safety and security of the tourists.

Both primary and secondary data will be analyse and highlited on the project reports.

Manipur past and present,naorem sanajaoba 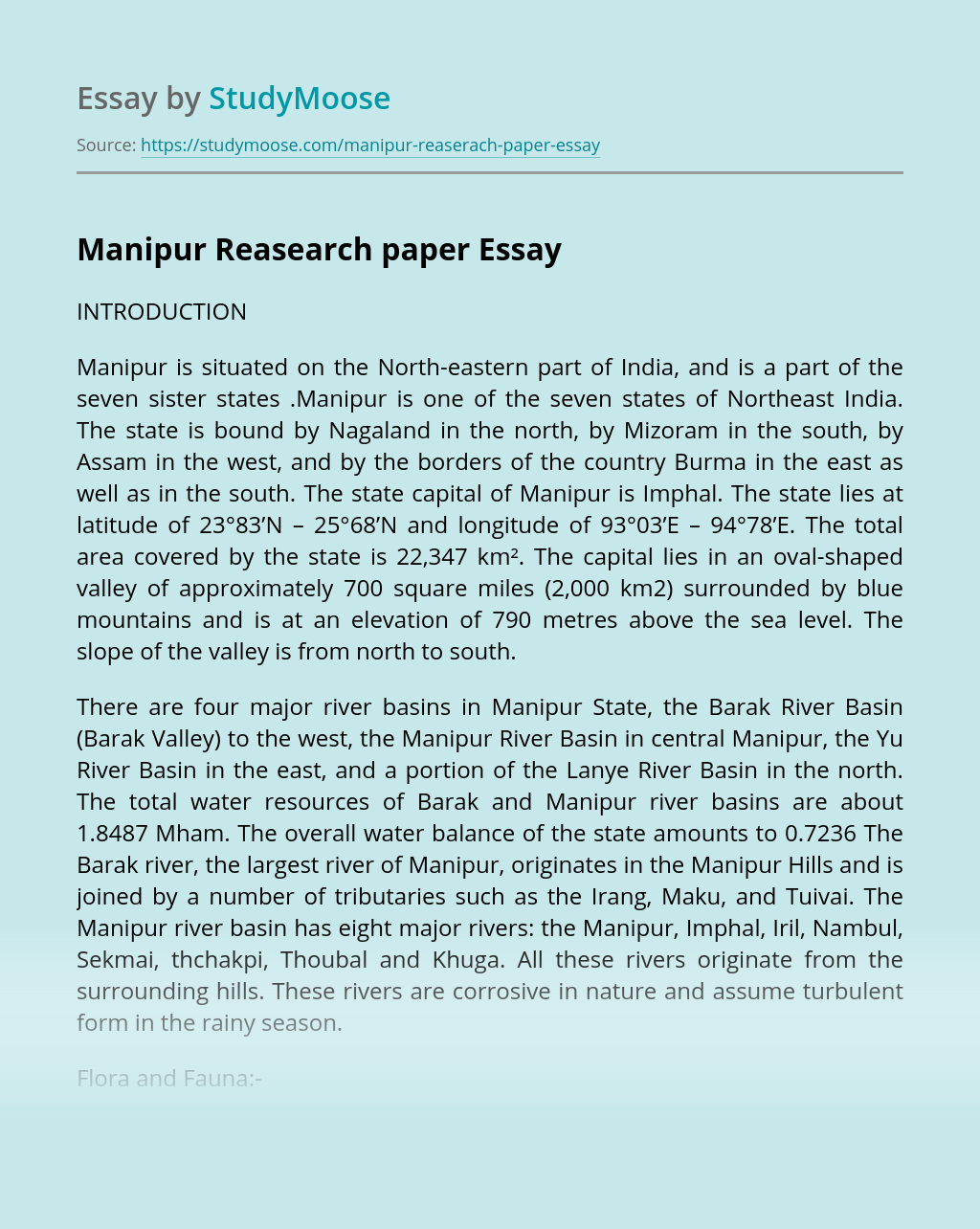 Commentary: Good Afternoon Everyone! I’m Queensy del Corro, your tour guide for this 2-Day and 1 night Bohol Countryside Package tour. You can call me queen, queens or just “Q”, whatever that suits you. And now, We are on our way to our first stop The St. Joseph Cathedral. St. Joseph the Worker is the...

Q1 The issue in the case of “A Brawl in Mickey’s Backyard” is that the employees at Disney feel that they are not treated well by the famous theme park owners going so far as to say that “they want to make money [referring to Disney], but they don’t care about the employees”. The uproar...

Get Essay
Tourism in Nepal

The word TOURISM refers tour which is derived from the Latin word “TORNUS” . It means a tool for describing a circle of turner’s wheel (Bhatia, 2002). It is very important pleasure activity where tourists travel from one to another countries and one region to another region as well.And Tourism also involves money for getting...

Introduction Tourism is seen as one of the main industries in the world. “The World Travel and Tourism Council (2001) indicated that tourism creates more than ten percent of the global economic output and 1 in 10 jobs worldwide”. “Tourism starts with the wealthy, with images of prestigious visits to seaside resorts and spas, Grand...

These range from one star to Five star deluxe depending upon size and amenities. About 30% of the rooms fall under the 5-star deluxe categories. To find out the present status of this industry a strength, weakness opportunity and threat (SWOT) analysis is mental. This will help us in understanding this industry and also identify...