Manipulation and Prejudice in Othello

The tragic play ‘Othello’, written by William Shakespeare, is one where the direct impact of themes such as jealousy, prejudice, and manipulation bring about the downfall of the protagonist Othello, a moor who is both a successful military leader in the city of Venice and the lover of the ‘Sweet Desdemona’. The Antagonist, Iago, weaves webs of deceit and denigrations on almost all of the characters and is portrayed as the puppet master, controlling the characters to his own end. The imagery associated with the central theme of jealousy suggests destructive, terrifying and perhaps unnatural qualities of this emotion.

Don't use plagiarized sources. Get your custom essay on
“ Manipulation and Prejudice in Othello ”
Get custom paper
NEW! smart matching with writer

It is ‘the green-eyed monster, which doth mock / the meat it feeds on’. There is a strong sense of devouring and being devoured in these images, which fits in with Iago’s description of Othello as being ‘eaten up with passion’. These lines suggest the exact quality of Othello’s monumental jealousy; once he becomes convinced that his wife is unfaithful, his jealousy does indeed feed on itself, leading the protagonist to become dehumanised and animalistic.

Jealousy is also deeply humiliating in ‘Othello’; Iago is correct when he says that it is ‘a passion most unsuiting such a man’.

There are three examples of jealousy that are explored by Shakespeare in ‘Othello’. Iago’s personal and professional jealousy, which is linked to feelings of envy and sets events in motion. This is demonstrated through the use of soliloquy where Iago expresses his hate and jealousy of Cassio when he was given a position that Iago thought he should have gained.

The use of soliloquy adds dramatic tension as Iago expresses his motive for revenge to the audience before enacting out his plans on the unsuspecting characters.

The second example is of Bianca’s suspicions, which help Iago with his manipulation of the Othello adding to the dramatic tension and the third example of jealousy is of the Moors towering jealousy. Othello’s character arc is somewhat depended on his feelings of jealousy when he assumes his wife Desdemona is ‘a strumpet’. The language that is used by Othello at the start of the play is in blank verse, unrhymed iambic pentameter. This structuring of the dialogue characterises Othello as educated, dignified and authoritative.

However, this is juxtaposed at the end of the play where there is little to no structure in Othello’s dialogue, often composed of short outbursts, characterises the protagonist as animistic, unhinged and weak. The theme of prejudice is also prominent in the play ‘Othello’. The cultural difference between the Moor and the general white Venetians serves as an impetus for conflict between the characters. The first instance of racial prejudice almost opens the play in Act 1 Scene 1 with the dialogue between Iago and Brabantio, ‘even now, an old black ram is tupping your white ewe’.

The animal imagery Iago employs when speaking of Desdemona’s copulation with Othello is firstly highlighting the racial difference between both Othello and Desdemona and secondly, relating interracial relationships as animalistic through dehumanising imagery. Many of the references to Othello in regards to his colour and creed are typically negative, though are undermined because the audience understands the motives of both Iago and Roderigo.

He is also described as ‘sooty’ and ‘thick lips’, which help to construct a negative characterisation of Othello. So far as dislocation is concerned, an aspect of the tragedy comes about because Othello is characterised as an outsider, he is in an weak position of being a black man in a white society. This dislocation is furthered through the marrying of a white woman and through holding a high positioned rank in the military. This is one of the reasons that Othello is subject to manipulation by Iago on racial grounds, and on Rodrigo’s racist ideology.

Manipulation and Prejudice in Othello. (2016, Nov 03). Retrieved from http://studymoose.com/manipulation-and-prejudice-in-othello-essay 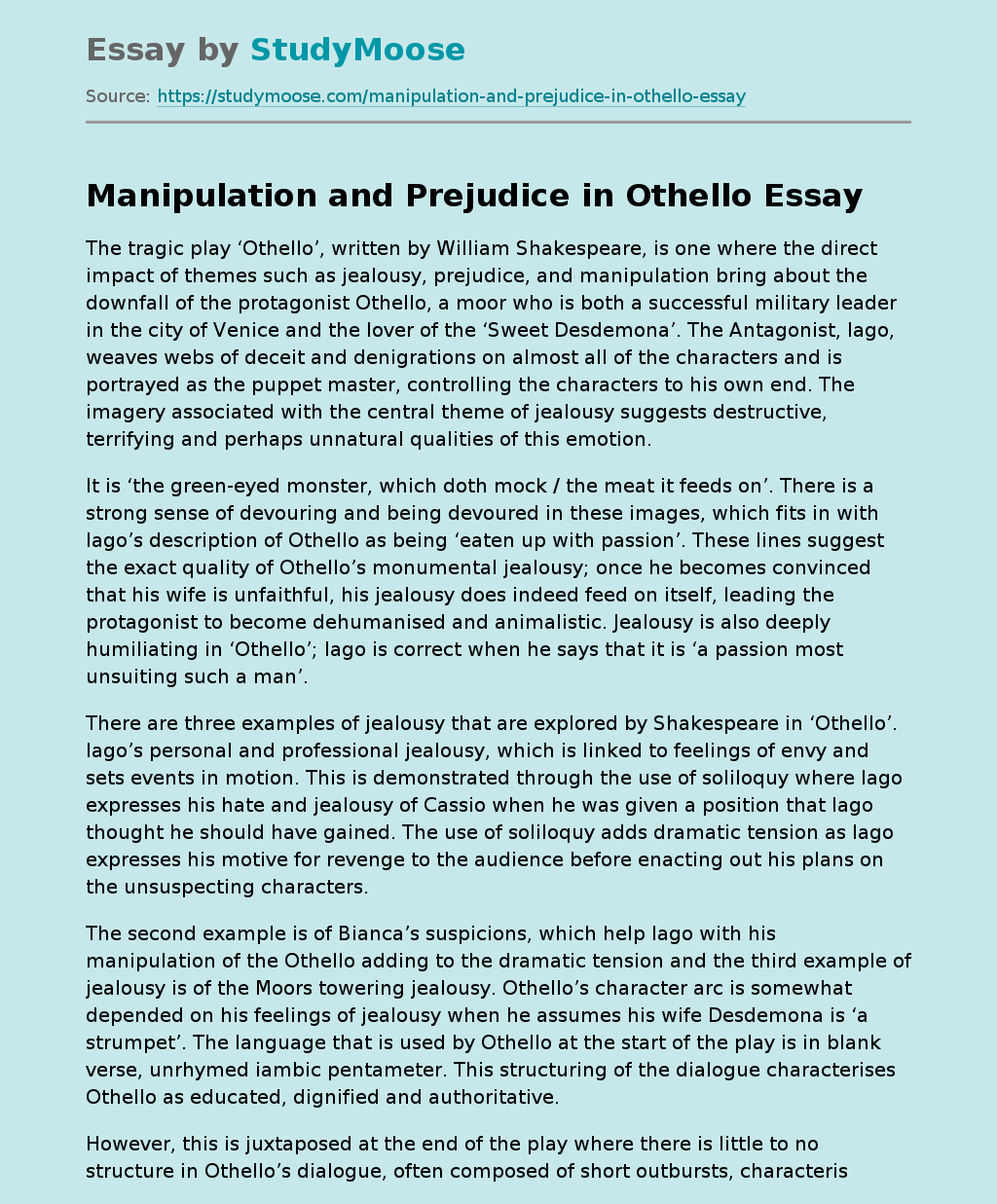