The Manila Zoological and Botanical Garden or Manila Zoo emerged from the ashes of World War II, a proud monument of man’s innate love of nature and its multitude of creatures.

This showcase of then Mayor Arsenio H. Lacson’s vision was born on May 18, 1959 by virtue of City Ordinance No. 4135 and inaugurated on July 25, 1959. Mayor Antonio Z. Villegas’ Executive Order No. 10, dated February 1, 1967, integrated into one office the Division of Recreational Services of the Social Welfare Bureau and the Division of Parks and Playgrounds of the Department of Engineering and Public Works with the Manila Zoological and Botanical Garden.

Don't use plagiarized sources.
Get Your Custom Essay on Manila Zoo Background Just from $13,9/Page

The new office was known as the Manila Zoo and Public Recreations Bureau. On June 15, 1969 the Congress of the Philippines enacted R.A. 5264 creating what now is known as the Public Recreations Bureau (PRB). The Manila Zoo is a 5.5-hectare (14-acre) zoo located in Manila, Philippines that opened it’s doors to the public on July 25, 1959. It receives millions of visitors every year, and is especially popular with visitors on weekends.

It serves as one of the educational centers in the country where the viewing public can observe, discover and learn interesting facts about the beauty of Philippine fauna and flora.

There are 106 species of animals, among which are 30 different kinds of mammals, 63 reptile species and 13 types of birds. In addition to popular zoo occupants such as elephant, tigers, lions and the hippos, Manila Zoo also houses several endemic and indigenous species of animals like the bearcat, long-tailed macaques and crocodiles. There is also a Kinder Zoo inside the Manila Zoo where anyone can roam around freely and interact with the animals inside. Children can play with tamed animals at the same time learn about them and their environment.

There is a small island at the center of the lagoon. Boat riders paddle their way around this island. There are also many restaurants, canteens and souvenir shops inside the zoo. The zoo also has several playgrounds for the children and tables and benches where families may have picnics. With a good mix of education and entertainment purposes, the Manila Zoo does its best to appeal to everyone.

ANIMALS
The Manila Zoological and Botanical Garden is home to more than 800 animals from nearly 100 species as of 2007. The zoo’s most popular resident is Mali, an Asian elephant who arrived at the zoo as an orphaned calf donated from Sri Lanka.

BOTANICAL GARDEN
The Manila Zoological and Botanical Garden is home to many plant collections, from the botanically rich and diverse Philippine Islands and South Pacific region. An estimated 500 species of plants including impressive mature shade trees thrive within the enclave. Aside from being a botanical garden, it is also considered as an arboretum. 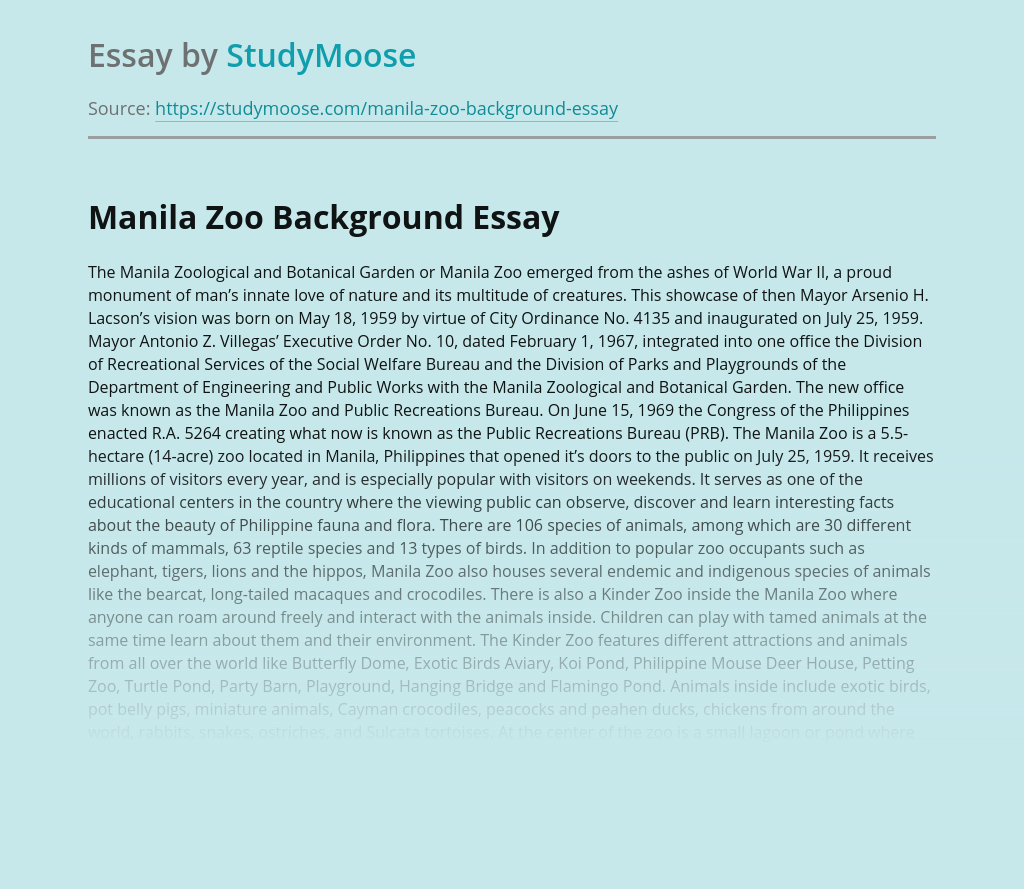 A Reaction Paper on ASEAN Integration

The video entitled ASEAN Integration- Philippines had summed up the information regarding ASEAN Integration (AI), most importantly, the advantages as well as the challenges that may fail Philippines from benefiting to it. Consequently, the integration will create a massive change for ASEAN and its member states. When this will be officially established by this year...

Get Essay
"When i was growing up" by Nellie Wong

1. title- When I was growing up (poem)2. Composer- Nellie Wong3. Year- 19974. What does this text highlight about the concept of identity?This poem is about the narrator’s own assimilation into the dominant white culture, and a need to become something she in fact isn’t. It shows how society can influence your identity, because the...