The term “Manifest Destiny,” which American writer John L. O’Sullivan first used in the New York Democratic Review in 1845. , describes what most 19th-Century Americans believed was their God-given mission to expand westward, occupy a continental nation, and extend U. S. constitutional government to unenlightened peoples. The idea was the driving force behind the rapid expansion of America into the West from the East, and it was heavily promoted in newspapers, posters, and through other mediums.

While the Manifest Destiny was not itself an official government policy, it had a critical impact on the foreign policy of the U.

Don't use plagiarized sources. Get your custom essay on
“ Manifest Destiny and Foreign Policy ”
Get custom paper
NEW! smart matching with writer

Polk ran on only one platform — westward expansion. He wanted to officially claim the southern part of Oregon Territory; annex the American Southwest from Mexico; and annex Texas.

Thus, Polk’s desire for land would eventually cause a great deal of suffering for many Mexicans, Native Americans and United States citizens. Following the earlier Texas War of Independence from Mexico, tensions between the two largest independent nations on the North American continent grew as Texas eventually became a U. S. state.

Disputes over the border lines sparked military confrontation, helped by the fact that President Polk eagerly sought a war in order to seize large tracts of land from Mexico.

The war took place mainly on Mexican soil. Partially because of disorganization and instability in the Mexican government, the war resulted in and American victory. The Treaty of Guadalupe Hidalgo, ending the war, made the southern boundary of Texas the Rio Grande, gave California and New Mexico to the United States, and gave $15 million to Mexico in compensation.

Furthermore, the Manifest Destiny affected the foreign policy of the U. S. through Polk appointing John Slidell of Louisiana as minister to Mexico, and instructing him to offer up 30 million dollars to settle the disputed claims and purchase California and New Mexico—the territory between Texas and California. Like Polk many Americans during the 1840s-1850s were motivated by the spirit of the Manifest Destiny. Specifically, “Oregon Fever” seized thousands of western Americans hit hard by the economic depression (known as the Panic of 1837)—triggered largely by an over-speculation in federal lands.

Missouri was the starting point of the 2,000 mile Overland Trail, traveled by Jedediah Smith, Jim Bridger, and other mountain men. Commonly referred to as the “Oregon Trail,” the route ran along the Missouri and Platte Rivers, across the Great Plains, and through the South Pass of the Rocky Mountains. By, Americans moving that far west in Oregon only further supports that the Manifest Destiny impacted American thought and Westward colonization.

Lastly, President James Polk used the cry of “Manifest Destiny” during his 1844 election, calling for the annexation of “All of Oregon”, and “Fifty Four Forty or Fight”, both popular rallying cries supporting annexation. James K. Polk’s used the Presidential bully pulpit and the cry of “Manifest Destiny” at different times, first with the British in attempts to gain Oregon and a couple years later to force Mexico to settle in 1848 and compromise, selling California and New Mexico to the United States to help end the war between the US and Mexico.

Through the Manifest Destiny, Americans were motivated to seek economic and land opportunities especially in California. For example, the Gold Rush attracted an abundance of Americans to strike it rich. James Marshall found gold while working for John Sutter at his ranch in northern California on January 24, 1848. He had been hired to build a mill for Sutter. This place would enter American lore as ‘Sutter’s Mill’. Word quickly spread through California, the rest of America and eventually the world and people flocked to California to make their fortune.

In fact, according to some estimates, the population increased by 86,000 people in two years. Most of these treasure seekers left for California in 1849, hence our name for them: 49ers. Next, the first lucky arrivals were able to find nuggets of gold in the streambeds. These people made quick fortunes. It was a unique time in history where individuals with literally nothing to their name could become extremely wealthy. The gold was free for whoever was lucky enough to find it. It is no surprise that gold fever hit so heavily.

Yet the majority of those who made the journey out West were not so lucky. The individuals who became the richest were in fact not these early miners but were instead entrepreneurs who created businesses to support all of the prospectors. However, the Gold Rush reinforced the idea of Manifest Destiny. America was destined to span from Atlantic to Pacific, and the accidental discovery of Gold made California an even more essential part of the picture. Furthermore, the U. S. started an act called the Homestead Act.

The Homestead Act stated that any White American that is over the age of 21 could move to the West side of the U. S. and own 160 acres of un-owned land if they wanted to. It also stated that a White American could get 160 acres of un-owned land and build a house on it then after 5-years it could be your land. The Homestead Act helped the western expansion in which was fueled by Manifest Destiny through the concept of how it’s the people’s “God Given Right” to own land. The Manifest Destiny also brought a strong feeling of Nationalism amongst the peoples.

Nationalism was the key point in the west ward expansionism. Without this feeling of “unity” in our country we never would have made it. The spirit of “Manifest Destiny” pervaded the United States during the Age of Reform—the decades prior to the Civil War. John L. O’Sullivan, editor of the influential United States Magazine and Democratic Review, gave the expansionist movement its name in 1845, when he wrote that it is “the fulfillment of our manifest destiny to overspread the continent allotted by Providence for the free development of our yearly multiplying millions.

Manifest Destiny was stimulated by nationalism and an idealistic vision of human perfectibility. It was America’s duty to extend liberty and democratic institutions across the continent. Underlying this divine American mission was a feeling of cultural and even racial superiority. All in all the overall concept of the Manifest Destiny, impacted the United States’ foreign policy through territorial acquisition and influenced American thought in which led to an abundance of Americans to move west because of economic, agricultural, and nationalistic beliefs. 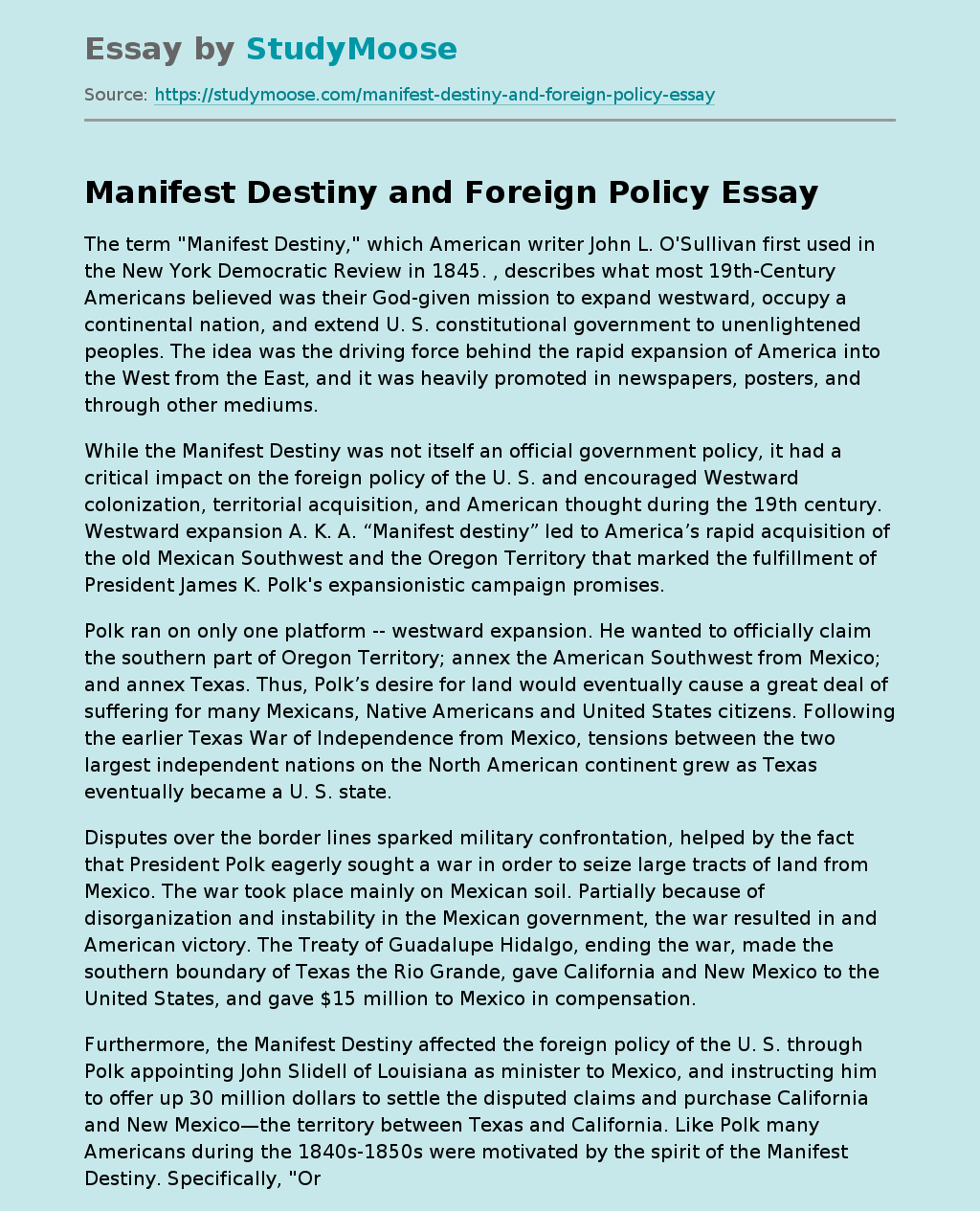