Management of The Creamy Creations Takeover

The case study on The Creamy Creations Takeover has reflected the elements of management in Fayol’s Theory including planning, managing, command, coordination and control. Burger Barn executives implemented “workstations” and ensured that the workers would follow the system to improve efficiency. His principles of management such as scalar chain, division of labour, centralization, authority and responsibility, and discipline are also evident.

Creamy Creations workers received orders from the same executives whereby communication flow is vertical; they also have to obey their orders and perform specialized tasks that are assigned to them because their executives have power over them.

Turn in your highest-quality paper
Get a qualified writer to help you with
“ Management of The Creamy Creations Takeover ”
Get high-quality paper
NEW! AI matching with writer

The tenets of Weber’s Theory such as hierarchy, division of labour and centralization are also apparent and how are these tenets approached in Creamy Creations case study are mentioned in Fayol’s theory. Taylor believes that there is “one best way” to accomplish a task in the timeliest manner.

The “workstations” system at Creamy Creations was the fastest way to serve their customers.

Although the turnover rate in Creamy Creations was high, but it was not a problem because of the large labour market capable for the unskilled work and according to Taylor’s theory, these workers could be easily trained. Communication and feedback from the workers can be seen as implicit part of these theories and in Creamy Creations.

Constructive feedback and comments from the workers could further improve the business and lower the turnover rate. special business of Bob Peterson in the southern city, after it became under the new management of Burger Barn, who is a local fast- food chain, the business’ direction changed.

Although he decided to slightly alter the processes of this business for improving profits and it worked for a time, but the changes simultaneously brought problems. Under his new management, the business lost its ‘culture’ (Miller, 2009)then became similar to others.

While increasing the number of the workers, the wages dropped. Because of the workload, and low wages, the internal management would be a big problem which was created while the changes were made, it might cause customer service dissatisfaction and the number of staff turnover had increased, on the other hand, just like the example of Starbucks in Adelaide, more customers would bring more mess in the shop, with disorganized internal management, the business would lose its customers over time.

Therefore, the group of us came out with some recommendations to its executives. Firstly, try to keep the originality and the culture of the business. Next, the leadership should work out a way to request feedback from the people in the community. The executives of Burger Barn have attempted to implement some new changes to Creamy Creations in a positive light. However, some of these changes risk having an impact on the rosy future they foresee for Creamy Creations.

Currently, Creamy Creations is still profitable and the financial numbers have rose since they took over management, but there are few things I do not think Burger Barn put any consideration into when they looked at the current state of the business and the future they foresee if business continues down the glories trail it is on currently. One of the things I feel Burger Barn did not consider when they predicted the future of Creamy Creations, is that Creamy Creations was still a relatively new business and it was getting praised by the members of the community and the college students namely the clientele.

When Burger Barn implemented the “work stations”, which eliminated the “Creamy Creators” per se, that completely changed the atmosphere of the Shoppe. It went from one day having the feel of a an old mama and papa store feeling of take your time, enjoy and savor the moment to order pay and get out; move, move, move people. It is very evident that Burger Barn executives specialize in fast food restaurants and do not really have a niche for taking your time.

Management of The Creamy Creations Takeover. (2016, Oct 11). Retrieved from https://studymoose.com/management-of-the-creamy-creations-takeover-essay 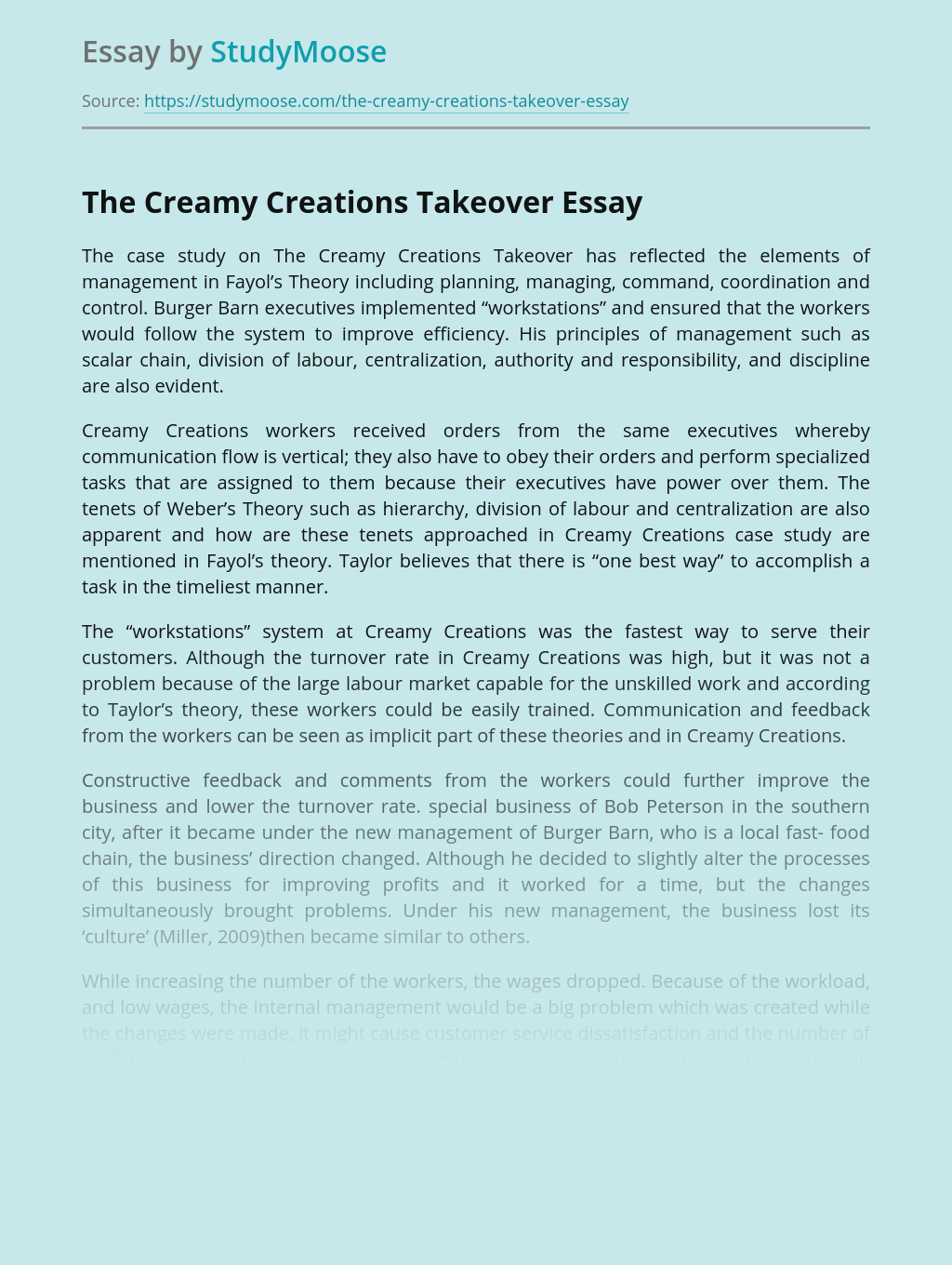 Turn in your highest-quality paper
Get a qualified writer to help you with
“ Management of The Creamy Creations Takeover ”
Get high-quality paper
Helping students since 2015
Stay Safe, Stay Original