Q 1. What are the advantages and disadvantages of a hands-off, decentralized management approach?

Decentralization will not work unless you really delegate both responsibility and authority. This means that the final decisions must be made at that lower level. You just can’t beat a decentralized system. It gets decisions closest to the level where the action really is. And it really does something for people. The executives are now essentially running business of their own. The companyhas confirmed their authority by making it very clear it will not let people dissatisfied with their decisions ‘jump’ over to the home office.

Finally, getting the decision-making out of the home office creates something like a family feeling in the outlying location. People there begin to depend on each other.

This means that the final decisions must be made at that lower level. Two things stand in the way of this working. One isthat the people who now have the authority may not let go of it.

The other is that the people at lower levels may not want to accept it. One of the problems, which decentralization aims to solve, is that the chief executive never has enough time to think about the major problems affecting the future of the operation.

Q2. How Can Daewoo Stay Competitive with the Japanese ?

An independent auto maker and to be global top ten as in Daewoo’s long range plan, with 3.5 million production indomestic (3.0 million) as well as in overseas plants (2.5 million) could not achieved without the success of globalization.The leadership in domestic market might be another important factor. Korean auto makers including Daewoo has tomeet the challenges from the Japanese auto industry in domestic market from the beginning 2012. The severecompetition in world auto industry induces the forecasting that only global top ten auto makers could survive in near future. We need more time to see whether or not Daewoo could meet the success the globalization and how Korean automaker, Daewoo could getover the manifolds challenges to be a global auto maker & key to success is the policy of Globalization.

Q.3 . What were some of the controllable and uncontrollable factors in this case? How should Mr. Kim have responded to those factors?

Controllable factors Kim deserves the most credit for the conglomerate initial success and responsibility for its ultimate failure Despite Daewoo’s initial achievements, the financial crisis fully exposed the weakness of its concentrated governancestructure. The concentration in decision-making power proved fatal when the conglomerate faced a crisis and Kim’s business acumen, ethics and principles faltered. Returning to its roots, Kim viewed the crisis as an opportunity for Daewoo to expand, not retrench, by acquiring distressed companies and turning them around. Kim’s autocratic control further centralized and decision-making suffered as a result of a generation change of his closest advisors. Kim had personally recruited many of these senior executives and they had grown together with the conglomerate expansion Until the mid-1990s, the key executives that surrounded Kim consisted of those that had been with him since Daewoo’s establishment.

Q4. What do you think of Daewoo Expansion into Europe? What are the advantages and risks for the company?

Daewoo’s currently at the crossroads of its European expansion in the automobile market. GM Daewoo has been successful in managing to market essentially the same cars in many parts of the world, particularly in the NorthAmerican and Japanese markets. Executives are wondering whether they should adopt more localized product level opment in Europe or not.

The rebranding comes as GM seeks to make a comeback in the global auto market, after having been hit by the global financial crisis, completing the world’s biggest-ever initial public offering in November. Its South Korean unit said that itwill drop the badge “GM Daewoo,” dogged by negative publicity stemming from bankrupt South Korean automaker Daewoo Motor acquired by GM in the early 2000s. It will introduce the Chevrolet brand for all of its new products this year. The company name GM Daewoo Auto & Technology Co will also be replaced by GM Korea Company in the first quarter.

Q 5. Why do you think GM acquired the company, while Ford did not?

Reason why ford did not acquired Daewoo

Ford pulled out of its planned $7bn (£5bn) takeover of Daewoo Motor, the struggling South Korean car maker, daysbefore a deal was due to be signed.Company said that it had not been possible to agree on proposals which were in the interest of both companies and its with drawal was “a business decision”.Ford, which has been conducting diligent inquiries, had sought to reduce its original $7bn bid to about $ 5bn to reflectdeterioration in Daewoo Motor’s assets.Daewoo’s creditors estimated in that the group’s motor business had liabilities of $16.4bn, against assets of $ 10bn and as because company feels that It’s a costly decision and at that time in 2000 Ford also suffering for its near bottom share prices.

Q.6 What problems can GM-Daewoo expect in the future?

GM General Motors like many multinational automobile manufactures has made the decision to excel in many researchand development operations Although the countries relatively new political stage, increasingly stable economy and improving infrastructure has presented unique opportunities for increased foreign direct investment conducting business for the, still presents a number of unique challenges.General Motors was not the first or the last automobile manufacture to enter into global automobile market presenting the unique challenge of overcoming the unique conditions of global business practices while still maintaining competitive advantage.

Lowered tariffs for automanufactures has cause an influx of assembly operations from nearly all the major automobile manufactures However unlike its competitors, General Motors General Motors has learned how to carefully and effectively conduct business.General Motor’s success with its joint venture agreements and research developments has even led them to into putthem global perspective. 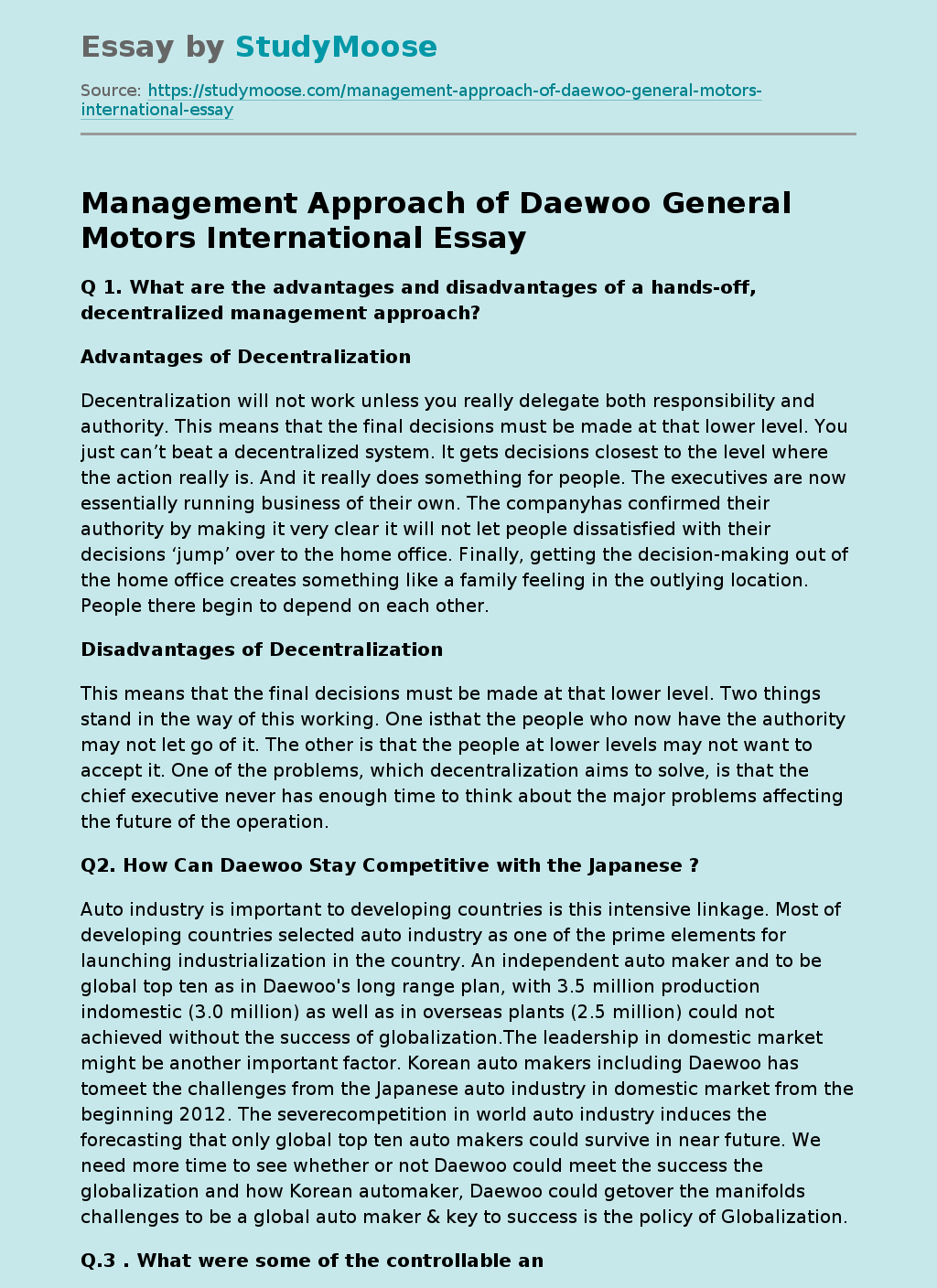