1) Who is Wolfgang Keller? What are his key strengths and weaknesses?

Wolfgang Keller is the Managing Director of Konigsbrau-TAK, which is the Ukranian subsidiary of a major premium beer brewer. Keller has previous experience in financially turning around a German food product manufacturer’s two subsidiaries (relatively smaller in scale than his current organization). Keller’s foremost strength is his ability to turn around an apparently difficult (for example, the economic turn-around of various subsidiaries) and at times apparent impossible situations (for instance, resolution of a distributor’s lawsuit, collection of payment from a near-bankrupt distributor, etc.

Don't use plagiarized sources. Get your custom essay on
“ Management and Wolfgang Keller ”
Get custom paper
NEW! smart matching with writer

). He has been successful in managing an organization in a foreign country for which he has made efforts to learn the language and understand the business culture. He has a hands-on management style and likes to be actively involved in the operational aspects of the business. He has the ability to build personal and, if needed, informal relationships with his staff and customers alike which has been instrumental in the better performance of his company.

As Dr Haussler has indicated, many of Keller’s weaknesses are “the other side” of his strengths. For example, his attempts at being hands-on can be perceived as over-interference by his sub-ordinates. Also, by trying to manage situations by himself he makes himself open to criticism over his team-working and proper delegation abilities. Keller himself recognizes that he can be impatient and may not give enough time for his ideas to settle in the minds of others. Another of his weaknesses, again as highlighted by his manager, seems to be his less than cordial relationship with corporate staff and infrequency of reporting to the corporate headquarters and his line manager.

This is also something that may be construed as a problem with Keller’s working practices as a part of team.

2) What important issues does Keller face? What are the most pressing problems he needs to address upon return to Athens?

There are three important issues which Keller faces and they are as follows. First is to try and improve upon his shortcomings (as highlighted in his annual performance appraisal) vis-à-vis the corporate staff and his line manager. There have been questions raised about his personality and attitude which include his management style and his ability to work well in a team. This may not be the most pressing problem but it could turn out to be a hard one to improve upon. This is because it might require fundamental changes to how Keller is used to work with and manage his staff.

Third, and this is the most pressing issue faced by Keller, is the apparent performance issue of Mr. Brodsky, the commercial director. Keller, over the course of two years of Brodsky being in the company, has noticed several issues with Brodsky’s performance. Keller feels that Brodsky is too slow to react to situations and he (Keller) has had to intervene many a times in order to prevent a potential disaster to the company. According to Keller, Brodsky’s “formal and distant” style is not suited to his job as a commercial director and moreover does not tune in well with Keller’s current and future commercial strategy of which an integral part is a close relationship with the company’s distributors. Keller does not see Bordsky as a leader of his sales force and considers his management style as more suited to a corporate staff based job than as a line manager.

3) What would you recommend to Keller to improve his effectiveness and chances of success?

I think, Keller’s experience in relatively smaller company previously has influenced strongly his working and management style (as is hinted by his manager and accepted by himself). He tends to rely much on personal contacts with his staff and even his customers and probably dislikes corporate procedures (evident by his apparent errors in interpreting corporate policies) and standard reporting mechanisms (evident by his infrequent communication to his line management). This works for a smaller organization but in a larger, multi-billion dollar, company Keller must learn to respect the importance of formal and frequent communication both upwards to the senior management and encourage it from his direct reports. If Keller has to succeed and move further up he needs to develop this skill of taking stock of and manage a situation when it may not be possible to be directly involved in that. This I believe is crucial for Keller.

Keller needs to learn the art of suitable delegation. Keller can tend to micro-manage situations and thus encroach upon his subordinates’ job responsibilities. Keller has defended this approach by pointing out that he uses the same approach with all his managers and none have raised a flag except Brodsky. I think this is something that Keller must address — he needs to delegate properly and thus build an atmosphere of long-lasting trust amongst his subordinates. His reports may only joke about it as of now (ref. the mock organization chart) but in future that may turn into something similar to what’s happening with Brodsky. Keller needs to control his natural inclination to be too hands-on and must try to hold back. A failure can teach a lesson more than constant lessons from a line manager. So depending on the situation it may be wise for Keller to let his report take a decision which in Keller’s opinion may not be the best one.

About the current issues that Keller is facing with Brodsky, as Keller himself concedes, firing Brodsky may not be the best decision at this moment. Keller should try and find the middle path with Brodsky – use his strengths and make his perceived weaknesses unimportant and make him feel free enough to manage his department. I think Keller should somehow try and get positive feedback from staff (maybe through a round of “360 degree feedback”) to verify whether his analysis that Brodsky is not a “charismatic leader” is really true or unjustified.

It could be that Brodsky’s staff may be too happy to have a leader who delegates rather than someone who is constantly involved in their day-to-day work. Keller, in the short term, should try to have an open mind about Brodsky’s abilities and try and involve him more in the setting of the overall commercial strategy of the company and let him have more freedom in managing his department. This would not only do well to his image as a team-worker but may also help in improving relations with Brodsky. Further, if Brodsky’s performance still does not change, Keller might be able to form a stronger case of Brodsky’s removal from the company. 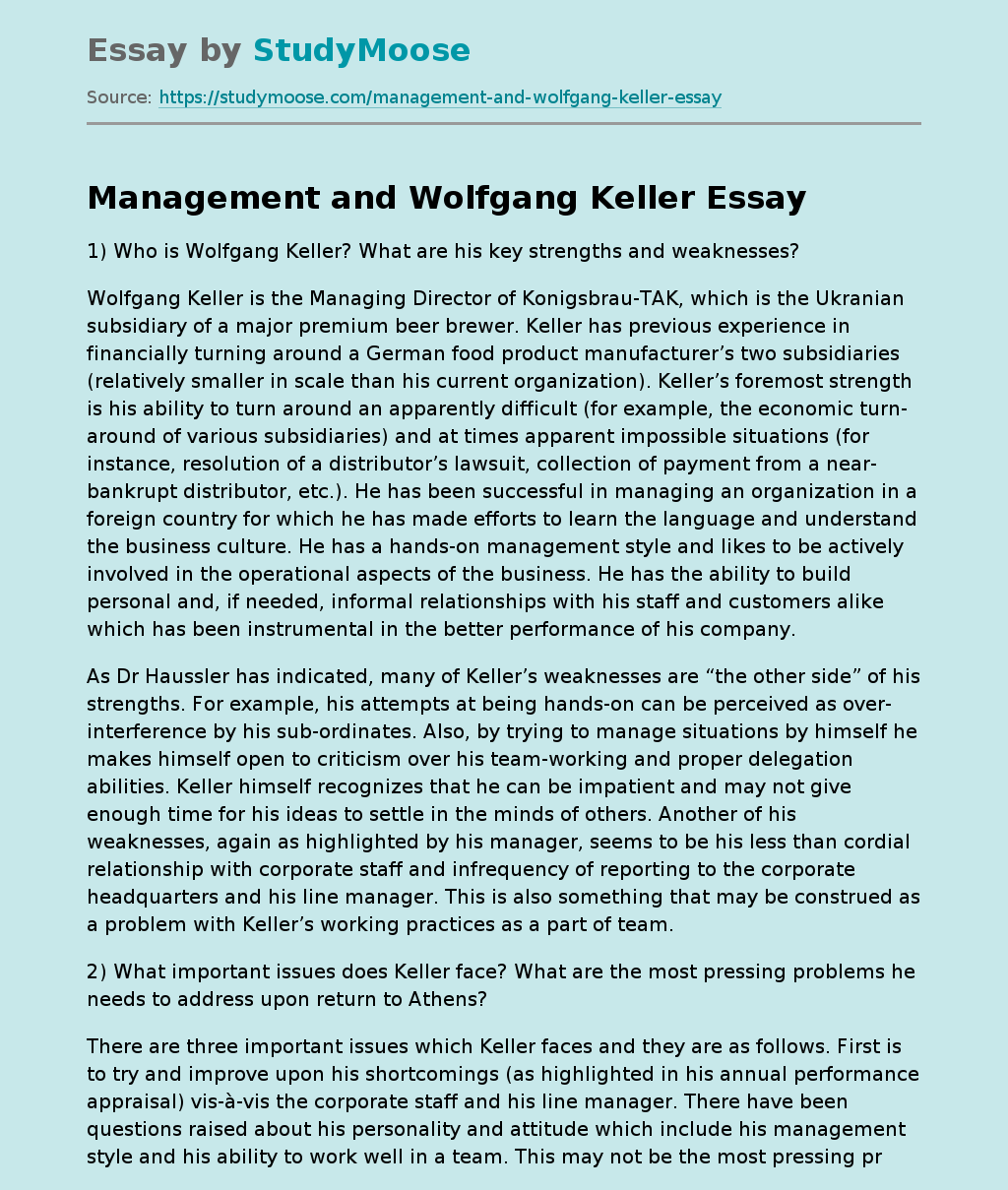