The man in the iron mask is the continuing story of those famous musketeers who were introduced to us in The Three Musketeers – Athos, Porthos, Aramis, and d’Artagnan. While it has been more than twenty years since their great deeds were performed, the four appear to be just as strong and brave as then. When Aramis visited the prison, he saw a man whose face is hidden behind an iron mask. The prisoner has been entombed for eight years, but he is not a criminal and he is yet to commit a crime.

Don't use plagiarized sources. Get your custom essay on
“ Man in the Iron Mask Book Review ”
Get custom paper
NEW! smart matching with writer

But Aramis knows the secret of the prisoner’s identity, a secret that is so dangerous that its revelation could fall the King of France from his throne!

Aramis is plotting against the King and he didn’t even told his friends. The motto of the Musketeers has been “All for one, and one for all.” Has Aramis betrayed his friends? Will they each prevail or is this the end of the four musketeers?

The story takes place in the early 16th century in France.

The Man in the Iron Mask was a name given to a prisoner arrested as Eustache Dauger in 1669 or 1670, and held in a number of jails, including the Bastille and the Fortress of Pignerol (today Pinerolo). He was held in the custody of the same jailer, for a period of 34 years. The possible identity of this man has been thoroughly discussed and has been the subject of many books, because no one ever saw his face, which was hidden by a mask of black velvet cloth.

In the late 1840s, the writer Alexandre Dumas elaborated on the theme in the final instalment of his Three Musketeers.

The story is narrative. Some words are hard to understand. It is a historical fiction novel. The mysterious prisoner was the central of the story.

I only give 4 ratings even though I love the story because I have this feeling while I’m reading the novel that I want more. I wasn’t satisfied, and I don’t know why. This novel is one of my favorite books now, even though I wasn’t super satisfied of the story. I love to read Alexandre Dumas novels. I really like his works especially ‘The Count of Monte Cristo” because of its fast-paced and action-packed plot. He wrote his novels well and it’s not boring. Dumas has a skill in creating complicated and interesting plots that will keep you biting your nails. And the most important thing is that you can get a moral lesson from his novel.

I really love the characters in this story because their personalities didn’t change. I love the quotes written in the story. Their friendship in this story is so precious. They work together and help each other. I really like their motto “All for one, and one for all”. 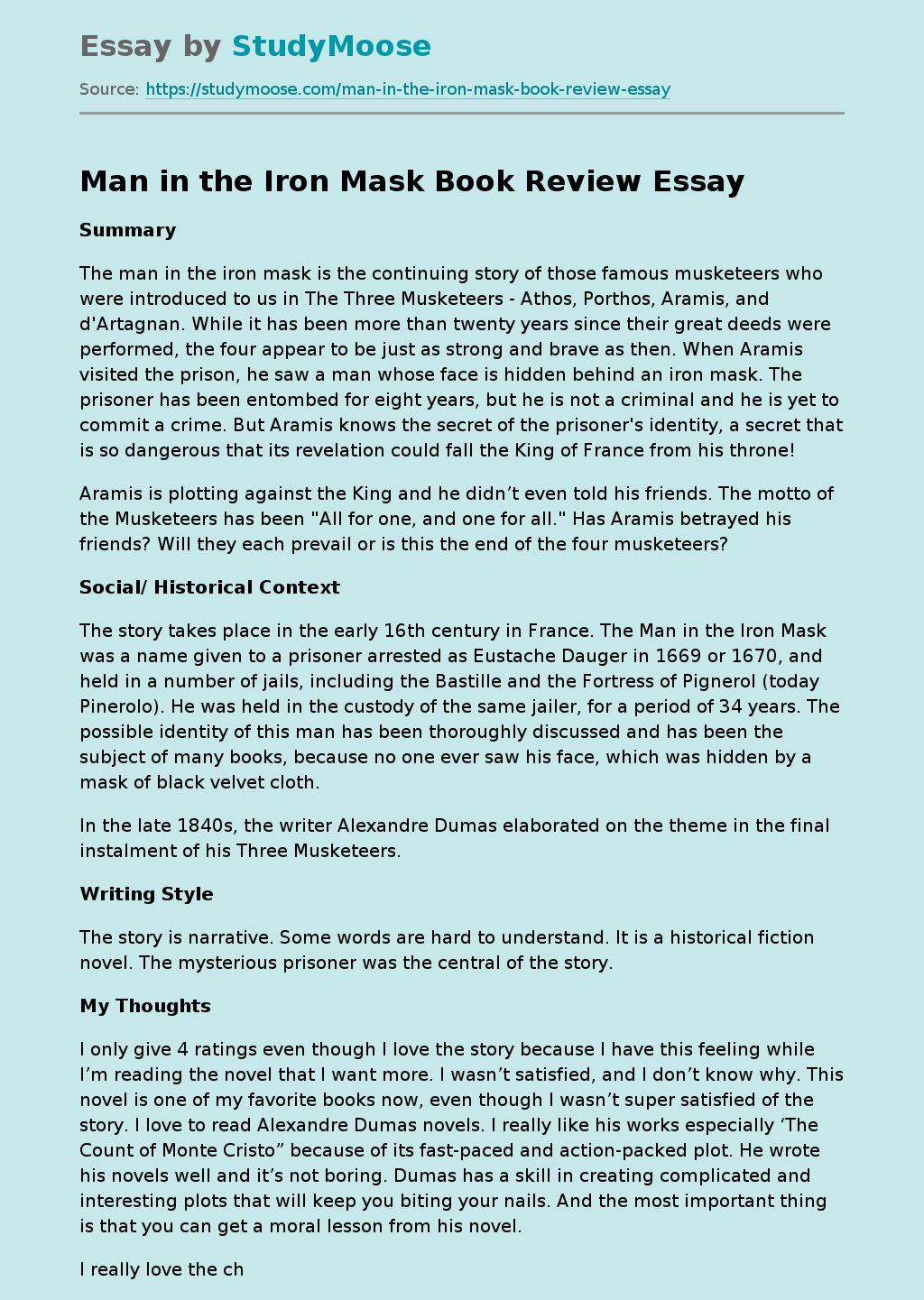