Man and Woman Relationship in Naga-Mandala

This paper is entitled Man and Woman relationship in Girish Karnad’s Naga-Mandala.. Simone de Beauvoir in her essay “The Second Sex” states that “The whole of feminine history has been man-made. Just as in America there is no Negro problem, but rather a white problem; just as anti-Semitism is not a Jewish problem, it is our problem; so the woman problem has always been a man problem.” Woman in Naga-Mandala is seen as an “other” in the society. It is an analysis of agony and anguish faced by men and woman in the society and their marriage.

The study aim in analyzing the man woman relationship which is depicted in the Indian play Naga- Mandala using the concepts of Simone de Beauvoir’s “Second Sex” and the concepts of Patriarchy.

Significance of the study/Theoretical Framework

The study of man and woman relationship differentiates male and female in terms of conversation, intimacy and their behavior. The concept of patriarchy oppresses women among the society. In the play Naga- Mandala Karnad clearly portrays the relationship between man and woman with the feminist perspective. The research employs both theoretical and analytical approach with the help of the text using the concepts of Simone de Beauvoir.

Research paper titled Naga-Mandala: A Story of Marriage and Love, provides the relationship of man and woman portrayed in the play.

Naga- Mandala is a play about a young couple named Rani and Appana. Appana is seen as husband who does not take care of his wife and locks her up in the house and he comes only in the afternoon to eat his lunch. According to Simone de Beauvoir, Appana treats his own wife as the “other” and makes her passive and static. He uses her as a so called “wife” to show the society that they are living together. Appanna does not lead a good life with his Rani and imprisons her by locking her up inside the house. Appana’s power is Rani’s subversive nature and the respect she gives to her husband. Rani is portrayed to be a good wife throughout the play. She obeys her husband and cooks lunch for him every day. She sees her husband as a sacred deity and worships him throughout the play. According to the Indian society marriage is seen as something sacred of “sex and love” between men and women. In this play Rani adjusts and lives her social life by herself, who is appointed by her husband and the traditional society.

Throughout the play Appana does not show any love or affection to his wife. The relationship of Appanna and the concubine is considered to be the symbol of lust. Girish Karnad portrays Appanna as the best example of male chauvinism. He goes to the concubine and neglects his own wife and locks her so that she doesn’t get into any relationship. He is seen as a selfish person who leads a lustful life with another woman. He uses this woman only for her body and not because of love. This shows that he is escaping from the reality and cheats his wife and the concubine. He is treating the concubine and Rani in an unfair manner. The relationship with Rani and Naga is considered to a genuine love in the play. Naga comes in the form of Appanna and loves Rani who was in isolation from her real husband. Naga gives Rani everything that she missed from her husband.

He also understands and respects her feelings and emotions. Even though Naga is a snake he expresses true love to his beloved which a human being cannot give to his wife. As a result of their love, Rani becomes pregnant. In Kiranth’s words, “… an Indian woman knows that motherhood confers upon her a purpose and identity that nothing else in her culture can”. At the end of the play Rani is seen as a mother and good wife to Naga. The death of Naga plays a major role in the story where he sees Appanna and Rani with their child sleeping together, he feels jealous and this shows that he loved Rani and was very possessive on her. He dies for the sake of Rani and her family. Rani asks Appanna to prepare to perform a sacred ritual for the dead Naga and her son should do the last rights of his father, and Appana agrees to her strange demand. This shows the true love that she had for Naga. A.K.Ramanujan writes that the “ritual tale itself is a public even told during the Cobra Festival to propitiate snake, to ensure safety and fertility within marriage.”

The analysis of ‘Man- Woman relationship in Karnad’s play, serves as the best example of woman’s position in the society. “…marriage is always open, and a recognition of the blessings and goodwill of the outsider for bringing together the husband and wife.” This is clearly seen in the play where snake- lover is seen as a hero in the play by expressing his true love to his beloved. Appanna has failed in his relationship with his wife and the fate makes him to accept Naga’s son as his own. The two men with different characters serve the twist in the play, and they are direct contrast between each other. In a happy family the husband should always compromise with the wife and the wife should compromise with husband. Thus, after the death of Naga, Appana starts a new life with his wife Rani.

Man and Woman Relationship in Naga-Mandala. (2016, May 05). Retrieved from http://studymoose.com/man-and-woman-relationship-in-naga-mandala-essay 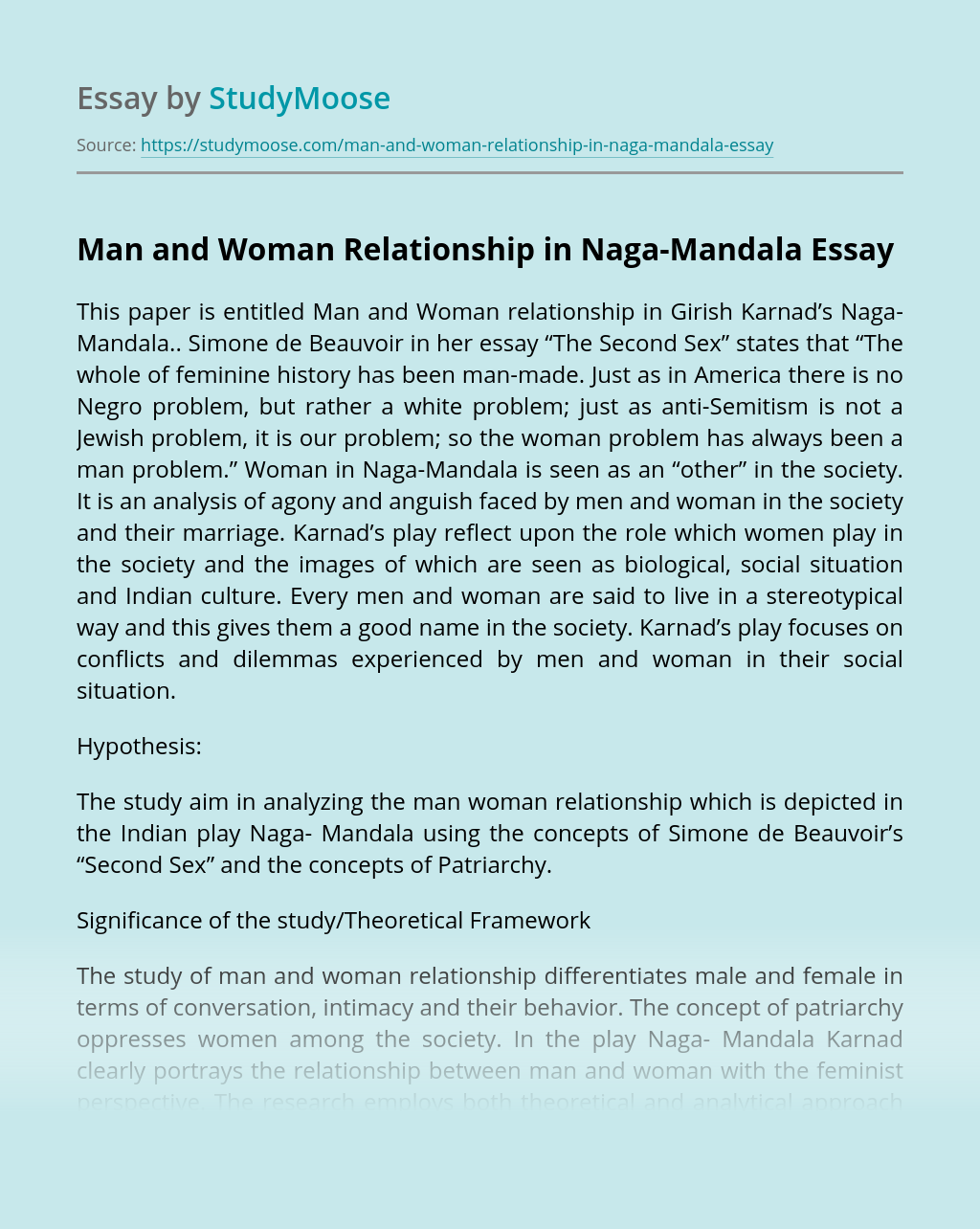 Don’t waste time
Get a verified expert to help you with Man and Woman Relationship in Naga-Mandala
Hire verified expert
$35.80 for a 2-page paper
Stay Safe, Stay Original