Theoretical Framework
The following theories provide framework of this research.
This study was anchored on the Theory of Kramer (1995). “The Texture Measurements of Foods: Psychological Fundamental, Sensory, Mechanical, and Chemical Procedures, and their Interrelationships (1995),” that sensory quality of foods, being a psycho-physical phenomenon, should be systemized or classified accordance with the sense by which the various attributes of quality are perceived by the consumer. The following attributes are used to determine and measure the quality of a product: appearance, taste, texture and aroma.

Don't use plagiarized sources.
Get Your Custom Essay on Malunggay Just from $13,9/Page

As positioned by the author appearance includes factors such as size, shape, color, and external attributes such as the attractiveness of the icon or logo. Size and shapes are measurements often used as grade standards or to differentiate between items. The assessment of size and shape is often a subjective process although, for many products, visual guide have been developed. Color is the primary indicatory of maturity is the result of the type and quantity of pigments in the product.

Changes in color are often related to freshness or deterioration of the product. Color can be measured by many visual or mechanical methods. On the other hand, taste is the perception of chemical compounds on the tongue and other nerve endings of the mouth. The basic tastes are sweet, sour, bitter, and astringent. Sweetness is directly related to sugars into the food and the sugar to acid ratio. Sourness is the result of the organic acids present. Compounds such as those in citrus fruits or coffee usually impart bitterness, where astringency is often the result of tannins such as the phenolic compounds in grapes (Kramer, 1995). Also, texture is “the composite of those properties which arise from the structural elements of a product, and the manner in which this composite registrars with the physiological sense” (Szczesniak, 2005). Most textural characteristics, except firmness are evaluated as mouth feels, i.e. the impression on the tongue, palate and teeth. In production, common textural characteristics include tenderness, crispiness, crunchiness, chewiness, and fibrousness.

Texture is generally determined by measuring force applied to the food. Lastly, aroma is the sum of the compounds perceived by the nose. It is very difficult to determine objectively since it is a combination of qualitative predominant and quantitative traits in a food product. Fruits and vegetables are rich in aromatic compounds; many of which are yet to be identified. Thus, in identifying the quality of the ordinary meat burger patties and the quality of the new product innovation which is the malunggay burger patty, the researchers used Kramer’s classification of quality to collect the raw data from the respondents. Another theory to support this study is the “Diffusion of Innovations Theory” by Thurber and Fahey (2009). This theory is used to describe well the evidence for growth and adoption of dietary Malunggay or Moringa oleifera and it highlights the need for a scientific consensus on the nutritional benefits. Diffusion is the process by which an innovation is communicated through curtain channels over time among the members of a social system. According to Thurber and Fahey (2009), the rate of adoption and possibilities of over adoption can be predicted using five characteristics of a new innovation. In order for Moringa oleifera to be adopted and for its wide spread use to be promoted, evidence must be provided for the following attributes: The first attribute is called Relative Advantage which is the extent to which an innovation is perceived as being better or more useful than the idea it supersedes.

Then, it is followed by the Compatibility which means the measure of how well an innovation is consistent with existing social and cultural practices, if it is likeable, and whether it meets the need of potential adopters. On the other hand Complexity is the level to which the innovation is perceived to be difficult to understand or use. Another attribute is Observability which is used to describe how well the results of the innovation can be seen and communicated to others. And finally, Trialability which refers to the ability of an innovation to be experimented with. The Diffusion of Innovations Theory is used to determine the rate of adaptation of the Malunggay or Moringa oleifera. Using this theory, it will give accurate knowledge on the effectiveness and health benefits of Malunggay or Moringa oleifera shall be known. Conceptual Framework

The conceptual framework of this research shall focus on the independent variables such as the respondent’s age, gender and grade level. Likewise, the dependent variables of the study are the respondent’s evaluation regarding the product in terms of appearance, taste, texture and aroma. Once these dimensions are known, a proposed Food Feeding Program shall be
formulated. 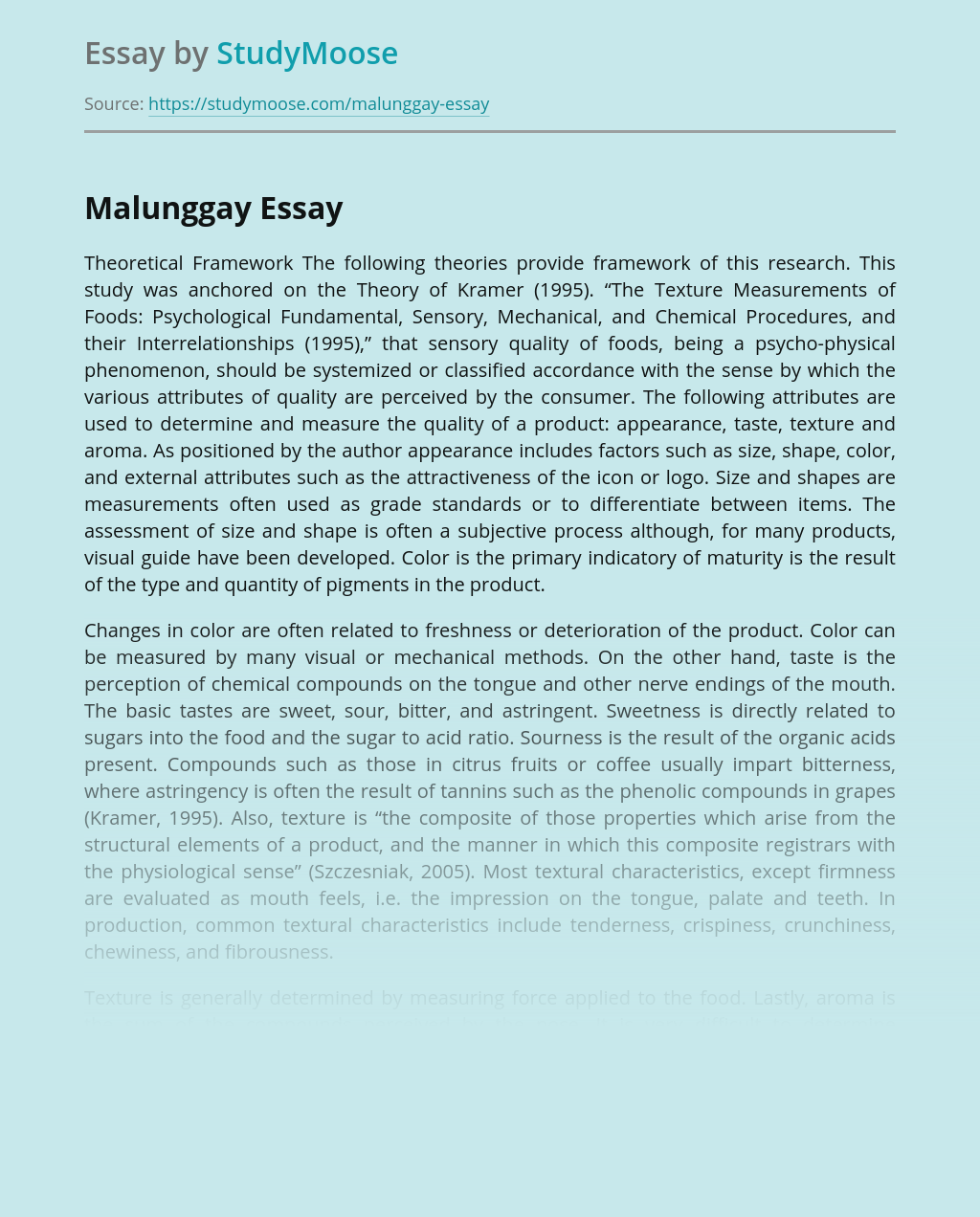 To speed up the delivery of justice, three significant reforms were instituted recently: (1) the “Judicial Affidavit Rule,” (2) the filling up of all judicial vacancies, and (3) the stabilization of judicial compensation. Judicial affidavit. To ease case congestion and minimize delays in the trial courts, the Supreme Court promulgated on Sept. 4 (to take... VIEW ESSAY

Pestel Analysis Political Factors : * War, terrorism, geopolitical uncertainties; issues beyond company’s ability to control. * 52% of the company’s net sales in 2007 coming from countries outside America. * Manufacturing or logistics might be interrupted by political events in the manufacturing countries. Economic Factors : * Overall global economy outlook is not good.... VIEW ESSAY

Have you ever felt scared when you are put in a foreign situation for the first time? You probably felt it was scary at first but afterwards you might have found it very amazing. Experience is what everybody may have to go through eventually. I was always afraid of experiencing new things because of fear... VIEW ESSAY

? Executive summary This report required spending great time on analyzing tones of marketing related information from innumerable sources of Nestle’s powerful Brand MAGGI Instant Noodles. Don't use plagiarized sources. Get Your Custom Essay on Malunggay Just from $13,9/Page Get custom paper All information was critical and needed to be evaluated with full concentration and determination,... VIEW ESSAY

Background Information: In our laboratory we were working with isopods, likewise known as pill bugs or rollie pollies. The isopods that we worked with were land isopods. They like to reside in damp places under untouched items such as boards, bricks, rotting logs and or rocks. Generally, they will live anywhere! If you are lucky... VIEW ESSAY