In ‘‘Hills Like White Elephants,’’ Ernest Hemingway reformulates and reassesses his own experiences in terms of male-female relationships and decisions about childbearing. The story bears clear marks of autobiographical inspiration, and Hemingway chose a rather odd time to write it: his honeymoon with his second wife Pauline. The author would marry four times in total during his sixty-one years, and ‘‘Hills With White Elephants’’ reveals some of his inner conflicts about intimacy. “Hills Like White Elephants” by Ernest Hemingway is a short story that provokes not only the reader’s intellect but also his/ her moral stand.

Don't use plagiarized sources. Get your custom essay on
“ Male-Female Relationships in ‘Hills Like White Elephants’ ”
Get custom paper
NEW! smart matching with writer

There were critical moral issues addressed in this story; abortion, teenage pregnancy, and morality to name a few. hemingway also used symbols to enrich the text. The color-white, elephants and hills basically emphasized the “PREGNANCY” issue in the story. Also, we can say that the setting and the conversations added the beauty of the work. It may sound so simple but Hemingway has his way of simplicity.

Keep in mind the era in which the story was written: the 1920s. Social mores were much more conservative then, and there was little public or private aid for unwed pregnant women or single mothers. Spain in the 1920s was strictly Roman Catholic, and the only acceptable options for Jig would have been marriage or adoption. Another issue is abandonment. The man is an American, but is Jig? Does Hemingway tell us? Even if she persuades him to marry her, there is the possibility that he may just leave her.

What kind of life would the child have if the couple did marry and have the baby? Would the parents drink too much? Would they argue and fight? Would the man resent the child and make his feelings obvious? I hope these musings help you! (cited in e-notes. com)

In typical Hemingway fashion, this short story leaves much room for interpretation and most critical details regarding character and plot unstated. Clearly, through the dialogue (the one messenger the reader has to this couple’s relationship) we realize that they are at odds over the issue of an impending abortion. As for other social issues, the language speaks to the unrestricted life of the hedonistic, ex-patriot era that many Americans enjoyed in Europe. Jig, the female, mentions that “none of this is ours anymore”, referring to the easy life of traveling without responsibilities or restrictions.

For her, things will change; for the boyfriend, who is rationalizing the procedure as something simple and easy (“nothing at all”) they’ll go right back to their vagabond ways and everything will be fine. On a more basic level, the stereotypical view that some men have (especially young, selfish men) about abortion being a quick fix, while women see it as a brief, yet permanently life changing decision could be another social issue. Again, Hemingway suggests, but never outright states. (cited in e-notes. com) The subject the man and the girl are discussing is that of an abortion.

The fact that they discuss the “operation” without calling it an abortion relays a lot about the couple and their relationship. By not naming the operation, they are attempting to trivialize the seriousness of the situation. Clearly, the relationship has many flaws, seen in the way they are dealing with the subject. It is not a straightforward or honest conversation, especially on the part of the man.

The man clearly wants the girl to have the abortion. He makes light of the seriousness and psychological impact it would have for the girl. He attempts to sway her by telling her it would damage their relationship. The girl is torn in trying to make a decision. She realizes that it is not nearly as simple a decision as her lover is making it out to be. A part of her wants her baby, and another part of her wants to hang on to her lover. The end of the story does not give a resolution to the decision that is finally made. It is up to the reader to draw a conclusion. The man also attempts to trivialize the abortion by making it sound simple, but abortion in Spain was not legal at the time. It wasn’t made legal in Spain until 1985, and sometimes women died.

Many doctors were not willing to risk their careers on being caught performing illegal abortions. Many times, the only doctors who performed them were doctors who weren’t very good or whose offices were less than sanitary. The man wants Jig to have the abortion, but she looks at the situation realistically. The man might leave her anyway, and she might be physically and psychologically scarred from the abortion, even if nothing goes wrong.

The subject of the abortion isn’t specifically named, but is alluded to. An “elephant in the room” is when you have a situation or topic of major importance that no one wants to talk about, but the topic is there nonetheless. It can’t be ignored, but no one wants to deal with it because they don’t know how. Jig tries to deal with it, but the man refuses to. He just wants her to have it, so his responsibility is ended. This is the allusion that leads to the title. The “elephant in the room” is the abortion. (cited in e-notes. com)

The story was first published in 1927, so another issue besides abortion is societal attitudes toward unwed mothers. There was no such thing as government aid back then, so Jig would have had a tough time raising a child without a father. Unless she was independently wealthy, she would have had a hard time finding a job. The issue of illegitimacy would have arisen as well. Her child would have been branded a bastard in 1927. If the father refuses to fulfill his responsibility, the only choices open to her were abortion, adoption, or illegitimacy. (cited in e-notes. com) WORK CITED ALLEN-LINDA,”CRITICAL ISSUES-HILLS LIKE WHITE ELEPHANT”,University of North Carolina, Chapel Hill AMY-LEPORE,Freelance author ,University of Central Florida BMADNICK,Belen, NM 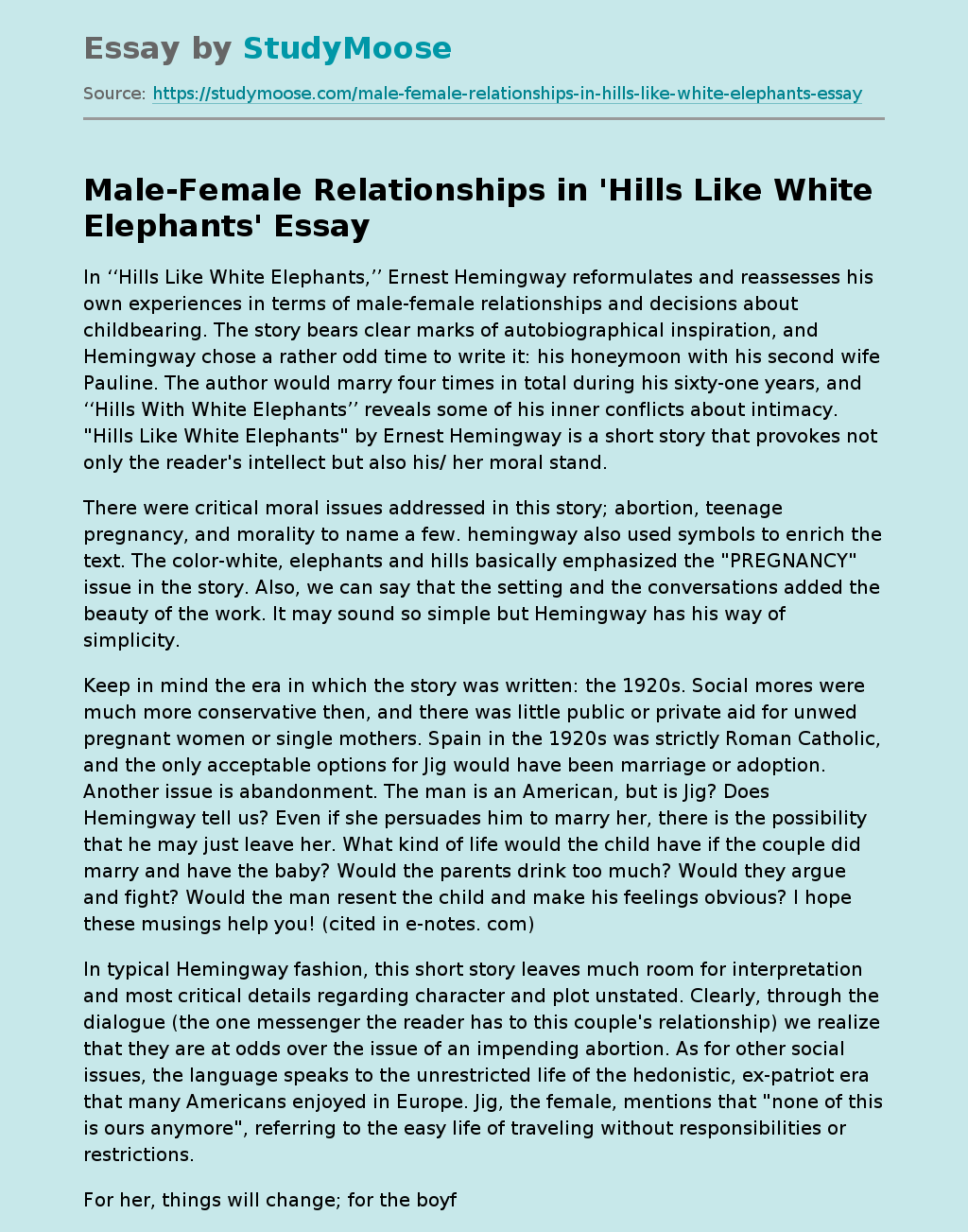