CHAPTER 1 Early History of Malaysia
1. History has proven that Malaysia is not a new country. Humans have been living in several areas of the country since the Stone Age.
a. Explain the early inhabitants that available in Malaysia and their characteristics. (8 marks)
b. What are the element of similarity among Malay Archipalego (2 marks)
2. According to history, Malacca was founded by Parameswara in 1403 A.D. In the years that followed, Malacca grew into a great Empire in the Malay Archipelago.
a. Discuss the Golden Age of Malacca.

Don't use plagiarized sources. Get your custom essay on
“ Malaysian Studies ”
Get custom paper
NEW! smart matching with writer

b. Explain the internal factors for the fall of the Malacca Empire

3. Malaysia subjected to other powers for about 446 years from 1511 till 1957.
a. Explain all five colonists that had colonized Malaysia before this (5 marks)
b. What is LESSONS that can be learnt from the fall of Malacca Empire? (5 marks)

4. Malaysia is classified as one of the Commonwealth countries because Malaysia was once a colonized land
a. Explain the reasons for Portuguese took over Malacca.
b. What happen to Malay Archipelago when British and Dutch agree to signed

5. Japanese occupied Malaya for only three and a half years , from 15 February 1942 to 15 August 1945
a. Discuss the reasons WHY Japanese military can conquer Malaya easily? (6 marks)
b. How Japanese army attack Malaya?

CHAPTER 2 The Struggle for Independence
7. On 1st April 1946, Malayan Union was officially announced after British Military administration was dissolve
a. Describes any four of the FEATURES of the Malayan Union.
b. Why the Malays opposed the Malayan Union?

8. Malayan union was setting up by British to govern Malaya. But, the union was opposed by Malayan.
a. Explain any three FACTORS which led to the failure of the Malayan Union.
b. How Malaya people show their opposition toward Malayan Union?

9. Opposition again Malayan Union by Malays and other races make British come out with new idea.
a. What are idea and MATTERS that being proposed by the committee for the new constitution?
b. State the reasons for AMCJA and PUTERA opposed the new constitutions?

10. Political parties continued to grow in Malaya. Leaders and members of political parties focused their struggle on protecting the interests of the members and also on striving for the country’s independence.

a. List and briefly explain on the political parties in ALLIANCE
b. What are the two conditions that given by British to Malaya in getting their independency? Is it Malaya successfully fulfill the condition? Explain about it
11. Malaya successfully obtain the trust from British to get our own independency through election.
a. Who are the team members that go to London in February 1956 to negotiate for Malaya’s independence?
b. Explain the FIVE fundamental principles in the 1957 Malayan Constitution

CHAPTER 3 Systems of Government and National Administrative Structure
12. The selection of Yang di-Pertuan Agong is based on procedures spelt out in the Third Schedule of the Constitution
a. Give three factors that can affect and shortened the period as the Yang Di-Pertuan Agong.

MALAYSIAN STUDIES
b. When the turns come, he cannot be Yang Di-Pertuan Agong under several reasons. Give the reasons.

14. In order to become the Yang-Dipertuan Agong, the candidate’s are selected among the sultans.
a. What are the POWERS of Yang Di-Pertuan Agong?
b. Briefly explain any four roles for the Council of Rulers. (5 marks)
15. The Cabinet is headed by a Prime Minister with ministers appointed by the Yang diPertuan Agong on the advice of the Prime Minister a. Explain the ROLES of Cabinet.
b. LIST the legislative power of Yang Di-Pertuan Agong.
c. Differenciate between senate and house of representative
16. The Judiciary or the area of justice lies with the courts. a. List and explain three types of Courts in Malaysia.
b. Explain on the freedom of court in making decision?

CHAPTER 4 National Integration
17. Integration among races are important in order to maintain the harmony and unity among citizen.
a. Discuss the strategies that the government was and is using to create unity and national integration.
b. Explain what changes that you think happen when Malaya became Malaysia
18. Malaysia is unique countries where it includes a few number of races and gratefully, each races are stay together harmony.
a. Explain the problem of racial unity in the country prior to Independence.
b. Give the three factors and reasons of the problems in unity and integration between races in Malaysia.

20. The formation of Malaysia involved a gigantic change. But the dream became a reality and Malaysia as a new nation was born.
a. Explain why some people from Brunei, Sabah and Sarawak opposed this idea?

MALAYSIAN STUDIES
b. Explain why Indonesia and Philippines opposed the formation of Malaysia?

21. The Sultan of Brunei suddenly lost interest for his country to join Malaysia and Brunei did not become a member of Malaysia.
a. What are the factors that contributed to the withdrawal of Brunei from Malaysia.
b. Why Singapore’s separate from Malaysia?

22. The Federation of Malaysia practices a system of parliamentary democracy. a. Discuss the differentiation between Yang Dipertuan Agong and Sultan or Ruler of states in Malaysia
(4 marks)
b. Discuss the THREE bodies (divisions) that available in the systems.

23. The Judiciary or the area of justice lies with the courts. It is the third body or component in the practice of delegating authority.
a. What is SPEAKER of the House of Representatives. Who are the current speaker for our country?
b. explain three function of SPEAKER of the House of Representatives
24. Malaysia is a country that practices parliamentary democracy. In this form or system of government, the election and voting are the important political methods for the people to give the mandate to or determine the power for a certain party to form the government.

a. Gives five characteristics of Malaysia as a Parliamentary Democracy Country.
b. Explain three main responsibilities of Election Commission

25. The Ruler/Sultan is the chief executive for the respective state that rule the state based on the ‘act and advice’ principle.
a. Explain the POWER of Ruler or Sultan in their State.
b. What are the title of the ruler of Johor, NEgeri Sembilan,Perlis and Sarawak

26. Malaysia is a country that practices parliamentary democracy. In this form or system of government, the election and voting are the important political methods for the people to give the mandate to or determine the power for a certain party to form the government.

27. Democracy is a concept that is very meaningful to a country that respects the freedom of the individuals in determining the leadership of the country.
a. Describes the types of ELECTION
b. Discuss any three of election tools.

28. Citizenship is a special status held by the people who have the right to be in a country. This status gives rights, benefits and certain facilities.
a. What are the special rights that can be obtained by a Malaysian?
b. In your opinion, what are the responsibilities that should be borne by a Malaysian citizen?

CHAPTER 8 Development Plan and Vision
29. The Rukun Negara was officially proclaimed by Yang di-Pertuan Agong on 31 August 1971. The decision to formulate this national ideology was made a few months after the May 13 tragedy.
a. What is Rukun Negara? Explain two objectives of Rukun Negara.
b. LIST and briefly explain the principles of Rukun Negara.

30. The Sixth and Seventh Malaysia Plans are considered the gateway and the first 10 years of Vision 2020.
a. Give and briefly explain FIVE of the Nine Challenges of Vision 2020. 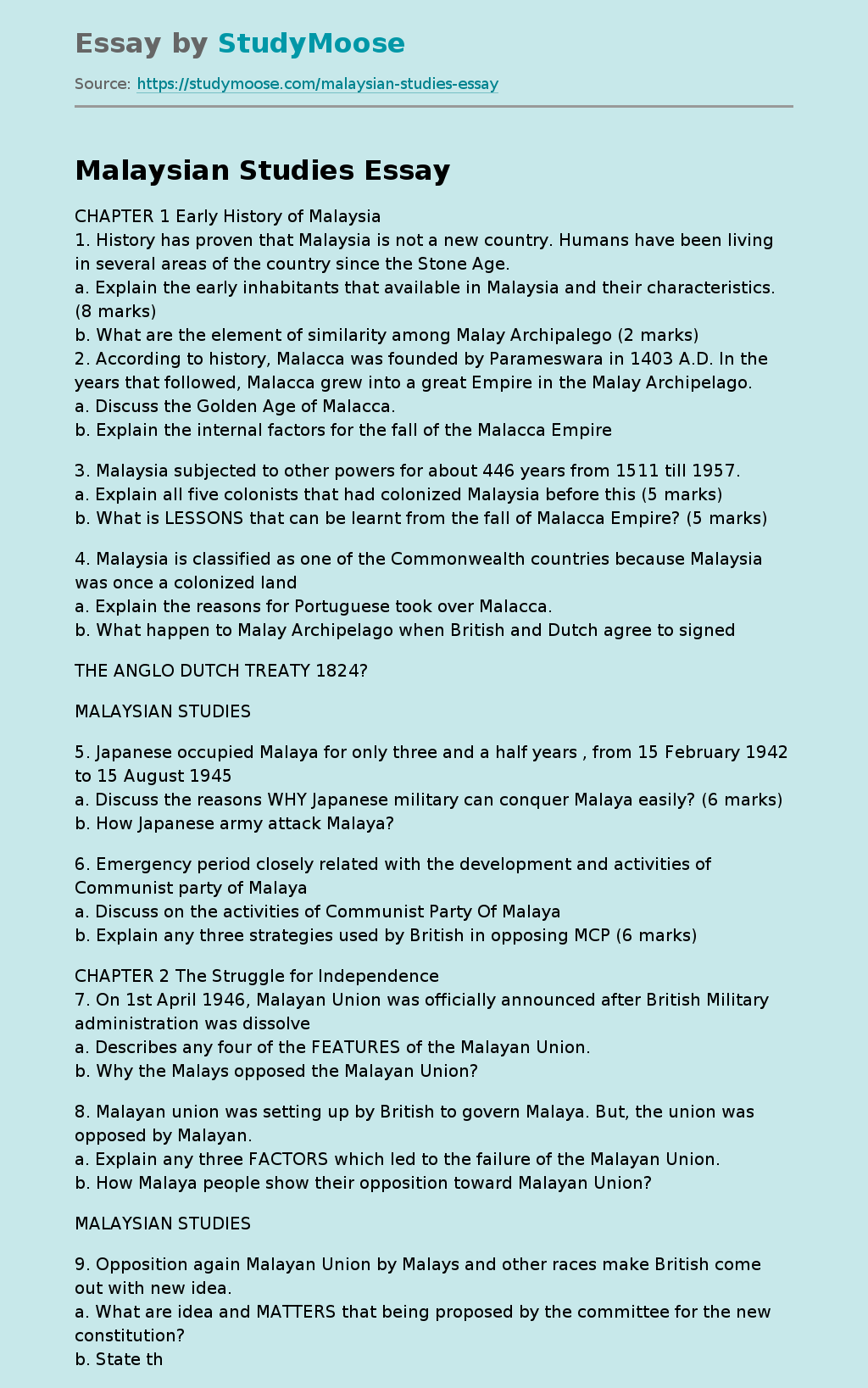