Malaysia’s cultural mosaic is marked by many different cultures, but several in particular have had especially lasting influence on the country. Chief among these is the ancient Malay culture, and the cultures of Malaysia’s two most prominent trading partners throughout history–the Chinese, and the Indians. These three groups are joined by a dizzying array of indigenous tribes, many of which live in the forests and coastal areas of Borneo. Although each of these cultures has vigorously maintained its traditions and community structures, they have also blended together to create contemporary Malaysia’s uniquely diverse heritage.

Don't use plagiarized sources.
Get Your Custom Essay on Malaysia Chinese Culture Just from $13,9/Page

Populated by the three (3) major races found in Asia, Malaysia culture is a melange of Indian, Malay and Chinese influence The Spring Festival is the most important festival for the Chinese people and is when all family members get together, just like Christmas in the West. All people living away from home go back, becoming the busiest time for transportation systems of about half a month from the Spring Festival.

The Chinese character “fu” (meaning blessing or happiness) is a must. The character put on paper can be pasted normally or upside down, for in Chinese the “reversed fu” is homophonic with “fu comes”, both being pronounced as “fudaole. ” What’s more, two big red lanterns can be raised on both sides of the front door. Red paper-cuttings can be seen on window glass and brightly colored New Year paintings with auspicious meanings may be put on the wall. Waking up on New Year, everybody dresses up. First they extend greetings to their parents.

Then each child will get money as a New Year gift, wrapped up in red paper. People in northern China will eat jiaozi, or dumplings, for breakfast, as they think “jiaozi” in sound means “bidding farewell to the old and ushering in the new”. Also, the shape of the dumpling is like gold ingot from ancient China. So people eat them and wish for money and treasure. Burning fireworks was once the most typical custom on the Spring Festival. People thought the spluttering sound could help drive away evil spirits.

However, such an activity was completely or partially forbidden in big cities once the government took security, noise and pollution factors into consideration. As a replacement, some buy tapes with firecracker sounds to listen to, some break little balloons to get the sound too, while others buy firecracker handicrafts to hang in the living room. People in different places follow various customs, but all show their love and longing for a better life. Today people will enjoy the full moon and eat moon cakes on that day.

The moon looks extremely round, big and bright on the 15th day of each lunar month. People selected the August 15 to celebrate because it is a season when crops and fruits are all ripe and weather pleasant. On the Mid-Autumn Festival, all family members or friends meet outside, putting food on tables and looking up at the sky while talking about life. How splendid a moment it is! | There are many legends about the evolution of the festival, the most popular of which is in commemoration of Qu Yuan.

People will dragon boat racing, eating zongzi and drinking realgar wine on that day. On Dragon Boat Festival, parents also need to dress their children up with a perfume pouch. They first sew little bags with colorful silk cloth, then fill the bags with perfumes or herbal medicines, and finally string them with silk threads. The perfume pouch will be hung around the neck or tied to the front of a garment as an ornament. They are said to be able to ward off evil. | The Qingming Festival sees a combination of sadness and happiness. This is the most important day of sacrifice.

Both the Han and minority ethnic groups at this time offer sacrifices to their ancestors and sweep the tombs of the deceased. Also, they will not cook on this day and only cold food is served. On each Qingming Festival, all cemeteries are crowded with people who came to sweep tombs and offer sacrifices. Traffic on the way to the cemeteries becomes extremely jammed. The customs have been greatly simplified today. After slightly sweeping the tombs, people offer food, flowers and favorites of the dead, then burn incense and paper money and bow before the memorial tablet. 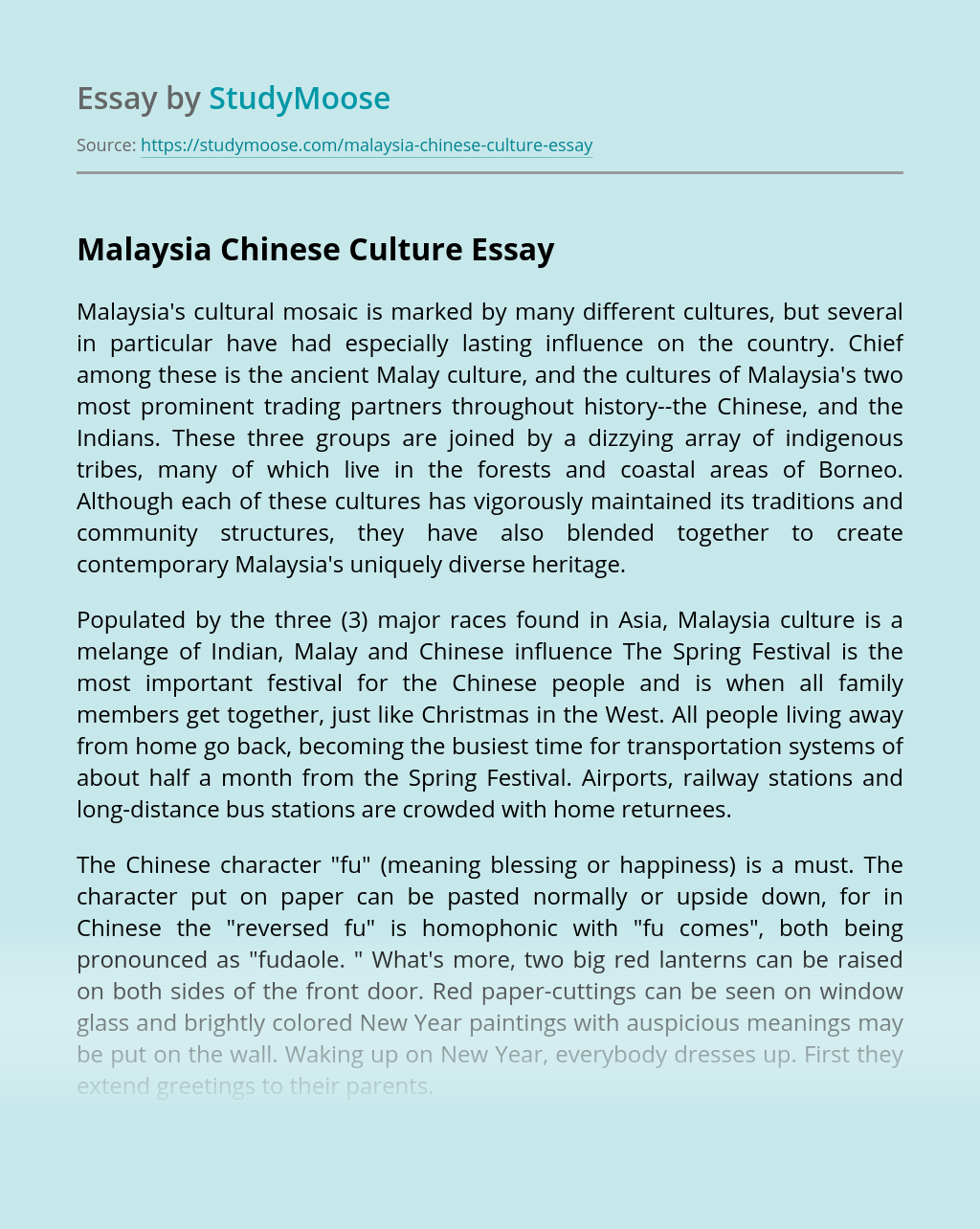 Chinese culture is known to value education as one of the most important things that you can have in the world. This historical importance of education in the Chinese culture dates back from the teachings of Confucius. China is also rich in great thinkers and philosophers, all having important contributions for China and in the... VIEW ESSAY

View sample
How Does You Race, Religion, Nationality, Gender and Culture Define You?

If we were stripped of our day-to-day activities, would you just wander around aimlessly, or would you default to the things that have been ingrained into our brains since we were little? What defines you? It could be your job, the fact that you are an A star student, a parent, or maybe it could... VIEW ESSAY