Despite the additions of the 13th, 14th, and 15th amendment in the 1860’s, Blacks still continued to face oppression in their everyday lives. However, one hundred years later, a renowned, eminent figure in American history emerged to combat this lack of inequality in hopes of finally reaching widespread equality: Martin Luther King Jr. Noted as a baptist preacher and civil rights activist, King, shared his dreams through the deliverance of a speech on August 28, 1963, “I Have A Dream.”

Presented on the steps at the Lincoln Memorial in Washington D.

C, King preaches the injustices the Blacks still endure. In the speech, King adopts a determined tone throughout in order to not only unite but sway America to recognize African Americans’ inalienable rights. King begins his speech by addressing the lack of freedom bestowed upon Blacks in which he makes it clear they will no longer suffice to this treatment. King alludes to “a great American” to remind his audience of Abraham Lincoln who “came as a great beacon light of hope” when he signed the Emancipation Proclamation.

However, even after the signing “we must face the tragic fact that the Negro is still not free,” which led to this very speech because King wanted to make it known that the lack of inequality still prevails. King then alludes to the Declaration of Independence and states how Blacks still lack “the inalienable rights of life, liberty, and the pursuit of happiness,” rights that are inherently granted to all. He alludes to these historical figures and documents to demonstrate the lack of change initiated when promised.

King then employs an extended metaphor when he states “we have come to our nation’s capital to cash a check.” King utilizes this metaphor to encourage his audience to collect what Lincoln promised to them 100 years ago: freedom. King refuses to “believe that the bank of justice is bankrupt,” and he sincerely hopes America grants freedom that the Blacks so rightfully deserve. By alluding to historical figures and documents, and through the incorporation of effective metaphors, King evokes vexation from the Black community in which they hope to put an end to these empty promises. King continues his speech by emphasizing the importance of unity and peaceful protesting by incorporating pathetic appeals of righteous ideals and repetition. He appeals to the solidarity of the audience by stating that “we cannot walk alone,” uniting his audience with his cause through the word we. He also uses the ideas of unity to stress the power and significance of a peaceful demonstration, because “we must forever conduct our struggle on the high plane of dignity.”

Inspired by Mahatma Gandhi’s views on violence, King reminds the audience to remain pure at heart and to not fall into the whims of hatred/revenge. Through the restatement of the phrase “Go back to” along with the listed states,” King no longer wishes to endure this lack of equality from the states. He declaratively states that he will feverishly work to reform the system and encourages his audience to inform the people of these states that “we can never be satisfied” as long as injustice prevails. This showcase of uniformity coupled with a peaceful approach and indicative repetition, conveys an empowering, determined tone that urges not only the Black community but those that call themselves true Americans, to harmoniously unite as one through the fight for equality. King ends his speech by expressing his hopes and dreams that equality will one day materialize, and he paints a picture in which the nation will come together as one. King describes states and landmarks to connect to all people of various states even those from the “red hills of Georgia” which contained prejudice views. King’s description of these states focused on specific landmarks such as the “prodigious hilltops of New Hampshire” or the “mighty mountains of New York.” He emphasizes the vastness of the United States, and he wishes to not see freedom in one place but all around. King then shares his dream when he paints a scene in which “sons of former slaves and the sons of former slave owners will be able to sit down together at a table of brotherhood.”

This sense of unity causes the audience to visualize this hypothetical image in which they one day hope to make this into a reality. Appealing to the innocence and importance of the youth, “little black boys and girls will be able to join hands with little white boys and girls and walk together as sisters and brothers.” By referencing children, King reminds his audience that children are the future, so in order to visualize a productive, happy future, freedom must occur. King cleverly utilizes descriptive language by encouraging his audience to identify with his views, and therefore, make them into a reality. . Flashforward 55 years later, undoubtedly, Martin Luther King Jr. would smile seeing the phenomenal development and enhancement of America. Because King remains widely acknowledged in today’s society, movements such as the Black Lives Matter Movement carry most of his foundational core ideals and values.

Through the use of many rhetorical appeals, such as an outpouring of pathos, repetition, metaphors, allusions, and descriptive language, King successfully convinced Americans to unite in this fight. Despite the prevalence of bigotry and hate, America continues to foster an amazingly diverse Melting Pot in which the American Dream transpires for all. 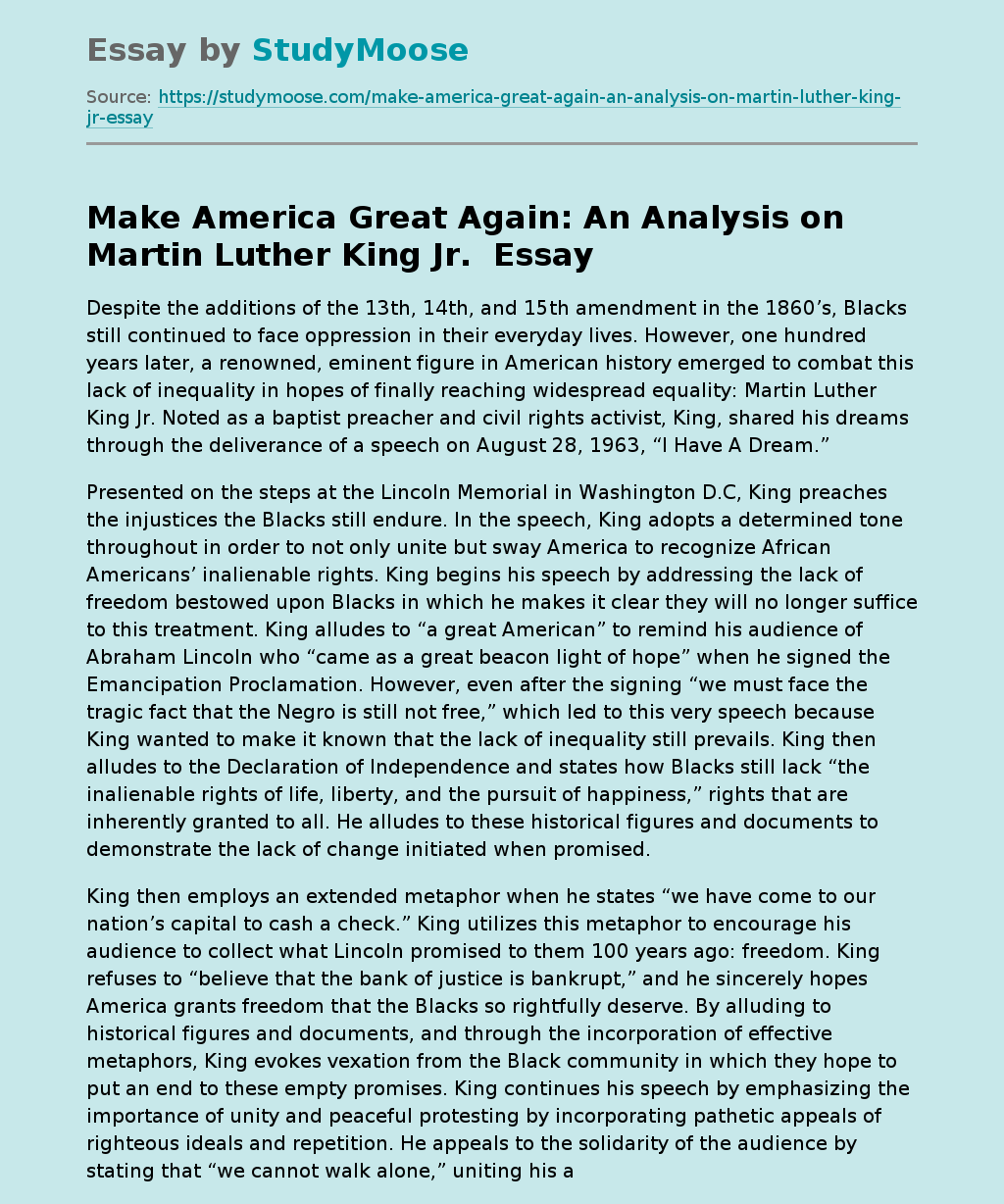